At the beginning, Ariel heads the storm tossed boat like a great, gleaming figurehead, thrown now this way now that by the waves and wind but at the same steady, distant, a spirit beyond the terror of those aboard who grip the ropes that are the boat in this wondrously outdoors presentation of Shakespeare’s Tempest by the Green Theatre Collective.  It’s brilliant staging by Sarah Hankins, acrobatic, all-out acting, and a hint of things to come in this outstanding production. 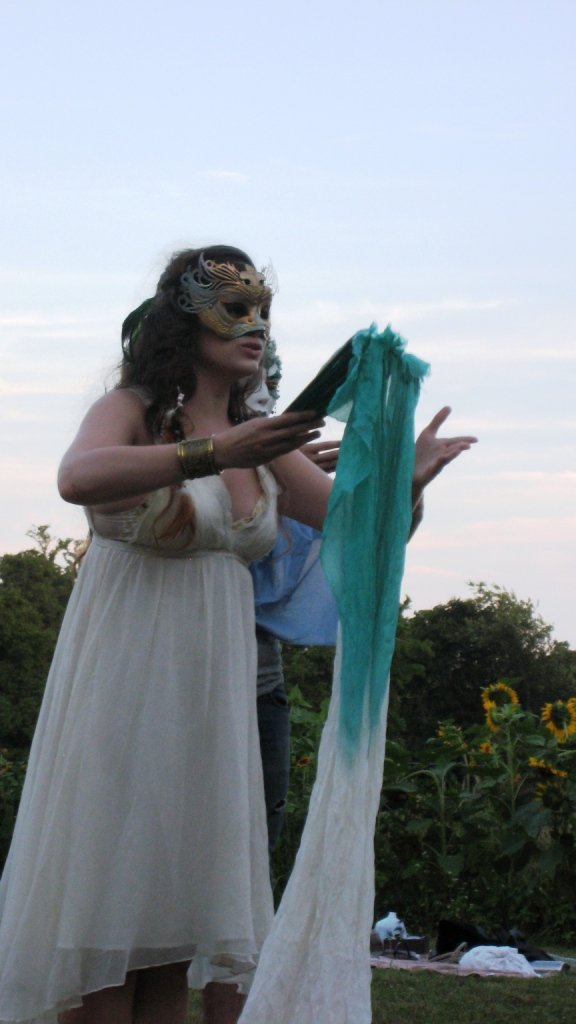 time of The Tempest, on the Sylvester Manor farm.  Bring a blanket to sit on — the actors have laid out blankets, too, with minimal props and costume changes (here a scarf, there a jacket).  A rope lying on the grass marks the stage.  No barriers.  How quickly we are in their world!

Prospero explains to Miranda the circumstances which brought them to this island where, beyond themselves, there are only Ariel, the gross, sensual Caliban, and some numinous spirits hovering between being and imagination.  Prospero has to provide an explanation because, through his magic, and the powers of his spirit servant Ariel, their isolation is about to end with the landing of a parcel of Europeans whom Prospero for his own purposes has drawn in from the shipwreck.  Among them are Prosperos’ evil brother Antonio who usurped Prospero’s Dukedom of Milan and Antonio’s friend Alonso, the King of Naples.

With the arrival of the shipwrecked men, Shakespeare wastes no time to show us that while raw nature — the island before Prospero arrived — is rank with witchery and torture, the civilized Europeans are no better.  Greed and drunkenness abound, murderous plots arise on the dime.  No one in power is safe: not Antonio, nor Alonso, nor Prospero himself.  Aptly, and in keeping with the interpenetration of the natural world and the workings of human beings that suffuses this production, as the conspirators spun their plots, an osprey seeking prey circled high above the actors and audience.

Two of the venial retainers, Stephano and Trinculo, coming upon Caliban, take refuge with him, tease him, delude him, mock him and exploit him — all the things that “civilized” people do with those they regard as “savages” — and this is written early in the Age of Exploration.  The actors bring to life Shakespeare’s wildly inventive comic situations, madly imaginative misunderstandings and gross and profoundly witty jokes of double meanings with such vitality, athletics and exuberance the the audience burst into applause. 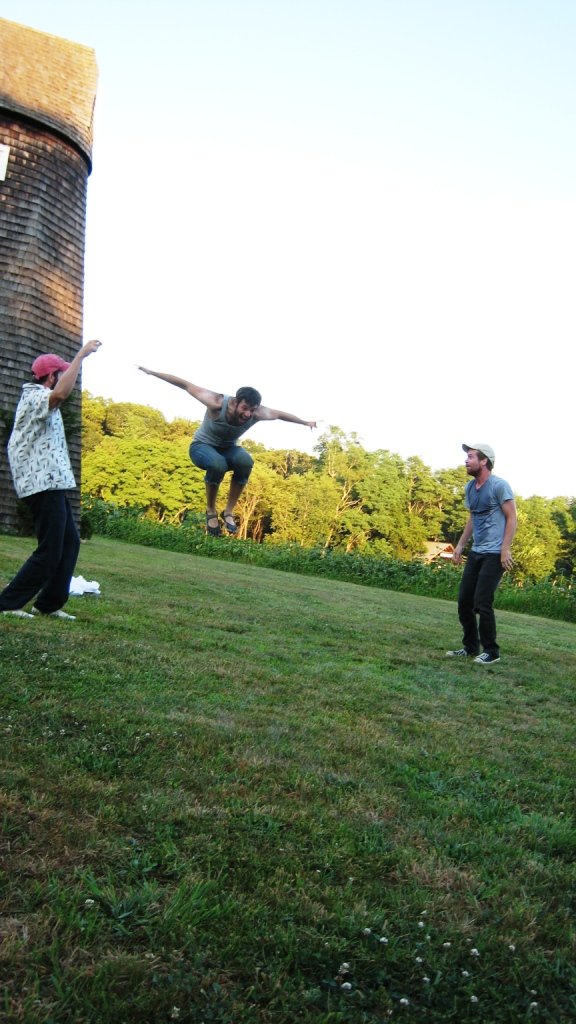 Dave Shaw as a Caliban leaps, over-excited by the new brew — wine — that David Gautchy as Stephano (L) and Brendan Boland as Trinculo (R) have introduced him to.  Photo:  Robert Ruben

Miranda’s naïve wonder offsets the cynicism of the wheeler-dealers — but how trustworthy is love at first sight?  The first of the shipwrecked men she sees is the handsome young Ferdinand, son of Naples’ King.  Setting eyes upon his good looks (the only men she’s known up to now are Caliban and her father), she’s thrilled at what she regards as an emissary of a brave new world.  (Would it were so.)

Reading a man’s good looks as virtue can get a girl into a lot of trouble but luckily Ferdinand’s as much in love with Miranda as she with him: he doesn’t let her down, and holds to the vows of pre-nuptial chastity Prospero exacts from him — and, youth being youth, it’s lucky the wedding comes soon!  It’s attended — enhanced, enlarged, enchanted — by wonderfully singing spirits of the island.  Another creature of nature joined the cast when, just in time for the wedding, a grey dove, bird of love, lit on the edge of the windmill’s roof and watched the proceedings from its high perch.

Prospero accomplishes all his purposes:  he recovers his Dukedom, chastises his brother appropriately — but finds it in himself to forgive, and settles his daughter into a royal marriage.  Now he can fulfill his promise to free Ariel, and set aside his powers to enchant, parallel with Shakespeare who sets aside his powers to enchant — by ending the play.  But first Shakespeare reminds us of his purposeful desire — to entertain.  That he does.

The naturalism of the production makes the play very close, clear and immediate.  Never has Prospero’s isle seemed more magical.  Never has being outside, and near the actors, seemed more essential to the full experience of theater — except, that is, for last summer, when this talented group of strolling players in this same venue produced an unforgettable As You Like It.

Melanie Closs’s music is so delicate and evocative that when the characters speak of the unearthly beauty of the music on Prospero’s island, one hears it just that way.  It’s part of the magic.

The six fine, young actors of the cast all play several parts except for Jessica Giannone, who plays, leaps, dances, and sings the ubiquitous Ariel.

Often they play their opposites.  David Gautchy, who plays the wise but mysterious Prospero, is also Stephano, the drunken steward who cavorts with Trinculo and Caliban.

Dave Shaw is an aggressively physical, athletic, distorted figure of a man as Caliban — as well as the courtier Gonzalo who in kindness had originally saved Prospero and the baby Miranda.

Gina Fickett plays the wonder-filled ingénue, Miranda, who becomes a woman through her love for Ferdinand, and quickly takes on a mannish gait and voice to play none other than Prospero’s evil brother, Antonio.

Brendan Boland is the brooding King of Naples who believes his son is lost at sea, and also an agile drunk, Trinculo, who seeking cover from a storm, finds himself sharing a blanket with the decidedly smelly Caliban.

I felt what theater at its best can make you feel — exhilarated and enlarged.  I thought — and think — I’m lucky to have seen Green Theatre Collective’s The Tempest.   Try your luck, too! 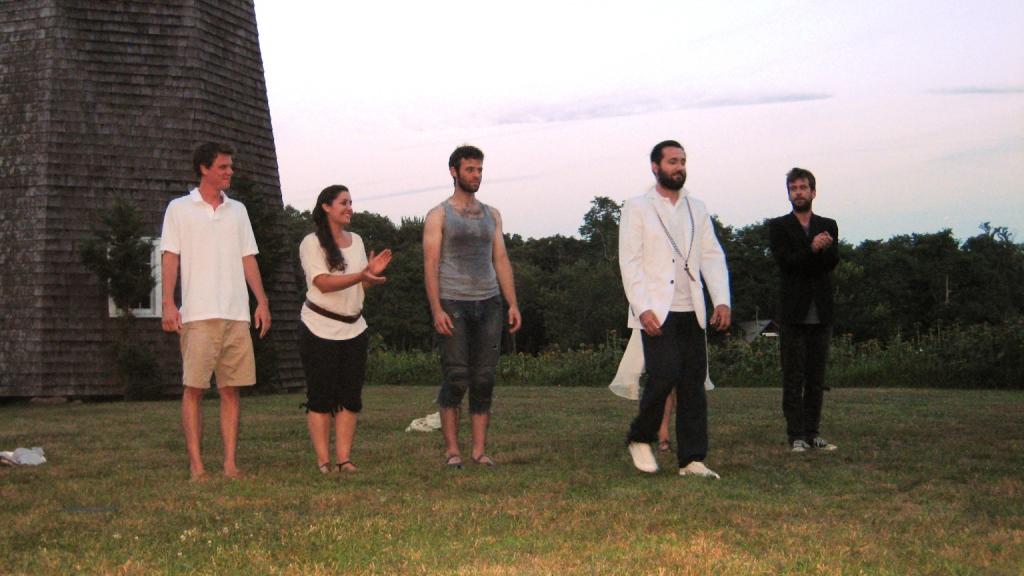 David Gautchy takes a bow in the white jacket that “makes him” Prospero the Duke of Naples, with left to right Hal Fickett, Gina Fickett, Dave Shaw and, far right, Brendan Boland.  Jessica Giannone is (unfortunately, apologies Miss Giannone) behind David Gautchy, maybe because Ariel does disappear in the end.   Photo:  Robert Ruben

This indeed was wonderful theater. The production served the words and the words served the production. It is great theater carried out by an intelligent, creative, talented and very enthusiastic cast with marvelous direction. It is a memorable evening – never have I seen a better Tempest.

Thanks Yvonne for such a wonderful review!!