What could be better than circling the fruitful fields of Sylvester Manor’s Community Supported Agriculture farm to arrive at the windmill, sitting on the verdant grass, and in this idyllic, mid-summer setting watching a beautiful production of Shakespeare’s great pastoral comedy performed by talented and idealistic actors of the Green Theatre Collective?

Nothing could be better.

We wait for the play to begin, some people nibbling the organic crudités and sipping wine. A thin cord rests on the top of the bouncy grass, marking the “edge of the stage.” Are those the actors seated — like ourselves — on picnic blankets on either side of the windmill? 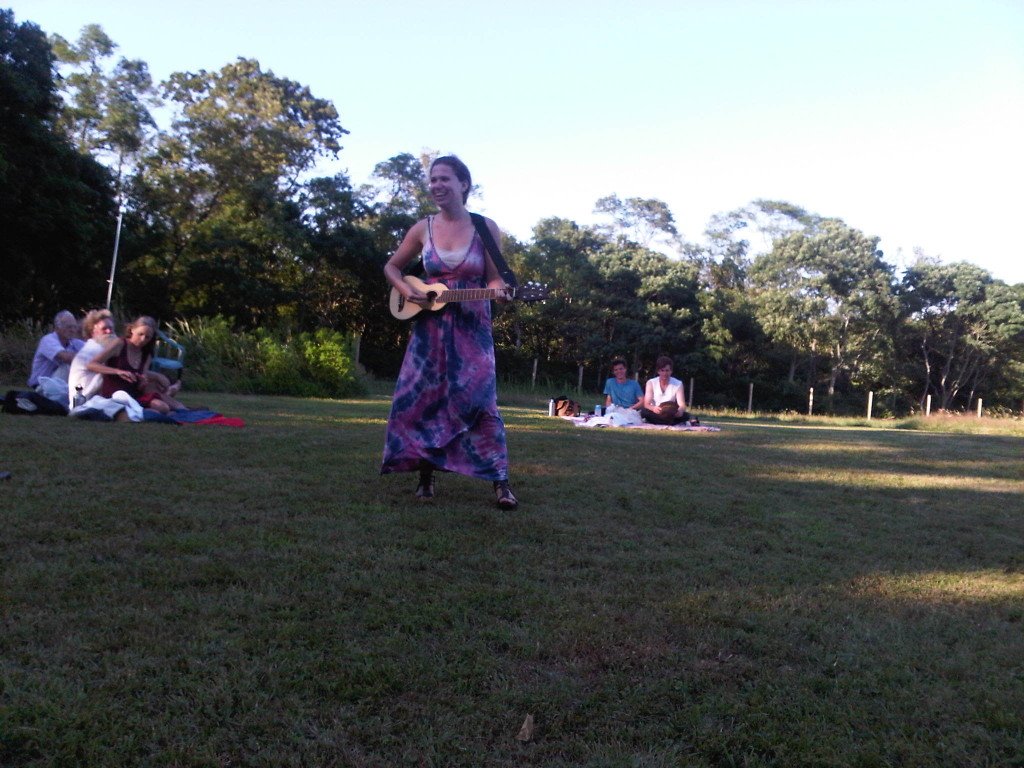 A nature spirit appears — Amiens, played alluringly by Melanie Closs, moves in and around singing the gentle, insinuating “Come Hither.”  You bet!

Orlando, persecuted and cheated out of his inheritance by his older brother Oliver, flees with his faithful servant Adam, first having fallen in love with Rosalind, daughter of the banished Duke Senior.  Duke Frederick, who usurped his older brother, the good Duke Senior, but had allowed Rosalind to stay in his court since she was his daughter’s, Celia’s, friend, but still hating her as her father’s daughter, now throws out Rosalind, who has fallen in love with Orlando;  her dear friend Celia, and the Jester Touchstone accompany her into banishment.  Rosalind goes disguised as a young man, “Ganymede,” and Celia, disguised as a poor lady, takes on the name Aliena to suit, as she says, her current situation.

All these loving, free spirits find their way to the Forest of Arden where, it happens, the exiled Duke has also found his way, living with some retainers. Tragedy ends in death, and comedy in marriage: this is a comedy and it ends in several marriages, but not before the course of true love has many chances to be confounded.

If you had any doubts about whether there’s such a thing as love at first sight, you’ll know for sure when Hal Flickett as Orlando is literally struck dumb, head over heels in love with Rosalind, his hands straining to convey to her the words of his ardor, locked in by his overwhelming passion.

Jessica Glannone as Rosalind matches his at first sight passion with her own, and holds it through the hilarious scenes where, she entrains him in her Ganymede disguise to woo her in the forest  “as if I were Rosalind”; she also plays Audrey, a country girl with a country style.

Seven actors play many parts (as all of us do, as Shakespeare reminds us in this play). Since Close and Flickett play one and Glannone two, the other four actors are kept really busy — shifting with skill and speed among characters, mood and — from palace to forest — locale.  It was fascinating to see David Gautschy switch — by slipping off his vest — from the nasty older brother Oliver to the poetic, free associating Fool Touchstone;  can this really be the same man!? Gautschy expressed all the poetic nuance and suggestive liberation of one of Shakespeare’s great Fools who convey a sense of depth that just won’t let you go.

Brendan Boland brought an outstanding quality of intelligence and weight to Jacques, whose melancholy provides a leaven to the idyllic fantasy of As You Like It. Boland brought to the famous “Seven Ages of Man” passage a passion equal, in its way, to that of the lovers — and by “sans everything” he had moved me to tears.

Gina Rivera was dynamic as the humorous, tough-minded Delia, a foil to the romantic Rosalind. It was touching that she played Adam the old servant as lame and weak-kneed while having a dancer’s freedom of movement:  free and in the forest, she came up with some heart-lifting light dance steps and a terrific cartwheel expressive of the buoyancy and joie de vivre of the play.

David Shaw was especially busy in terms of sheer number – five distinct characters and speaking parts. I especially enjoyed him as Charles the Wrestler in the scene where, as a strong man, he’s bested by the underdog Orlando.

In today’s NY Times (07/18/ll) Charles Isherwood, commented about the Royal Shakespeare Company productions in NYC,  “… these are among the most consistently clear Shakespeare stagings I’ve seen, at least in term of simple intelligibility.” The same can certainly be said of the Green Theatre Collective’s “As You Like It” – and they were acting with the acoustics of the great outdoors and the wind in the trees! I never missed a word — or a joke, or an idea. The gorgeous language was completely accessible – for the time, the language of Shakespeare, of the actors, and of the audience was all one.

It was a privilege and a joy to see Shakespeare so well and so appropriately performed. Thanks to Sylvester Manor Farm for extending itself in the direction of the arts, and bringing this play our way. I’m greatly looking forward the Green Theatre Collective’s future performances.

So far this summer this traveling troupe has played As You Like It in Maudsley State in Newburyport, Massachusetts, at the Musical Pagoda in Prospect Park, Brooklyn, New York, and at Sylvester Manor, Shelter Island, Long Island, NY.

Green Theatre Collective will perform the play at Franklin Stage Company, Franklin, NY, on July 23 and 24. 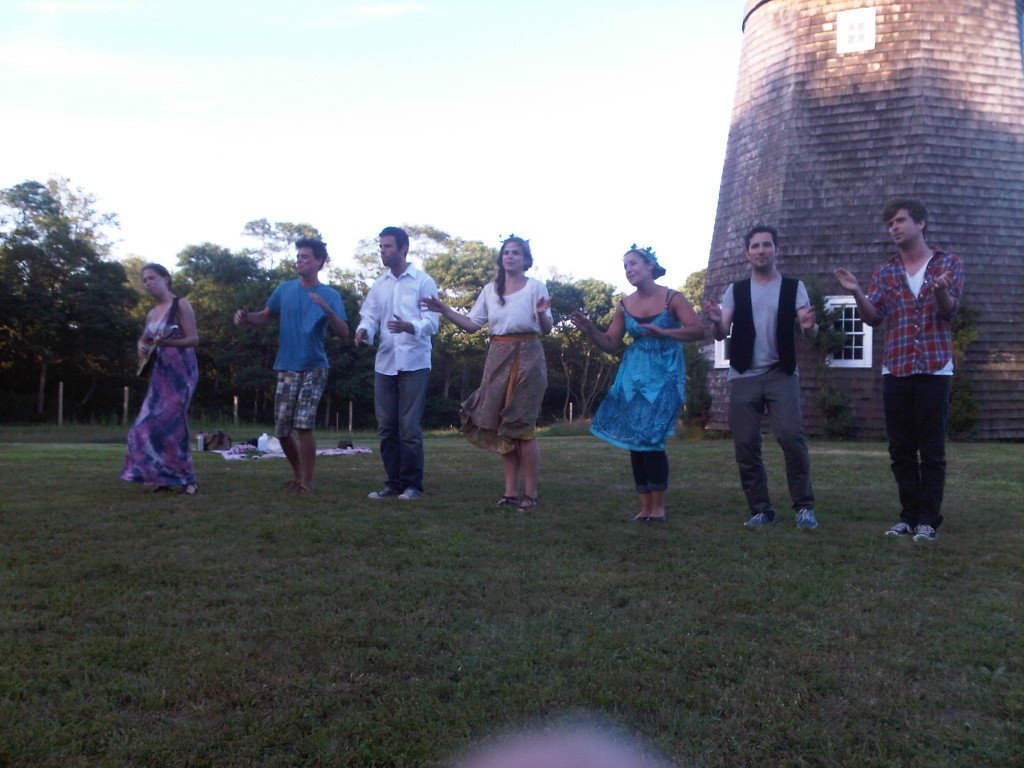 Thanks a lot! I hope you’ll see this groups “The Tempest” coming to Sylvester Manor on Shelter Island this July! Prospero’s island and Shelter Island — should be wonderful!

Thanks for your comment — I appreciate what you said! We live on Shelter Island inthe summer. This great troupe is performing The Tempest at Sylvester Manor this summer the weekend of July 13 – 15th, something we can all look forward to! Thanks again for writing. Yvonne

This is as it should be – the play was done in natural light of the evening against the dancing trees, a windmill, a green lawn, and a fecund field — the natural scenery and setting whose excellence was the least of the evening. I have seldom heard in any of these plays each word spoken so distinctly with such appropriate emotion – not only was ones vision filled but the ears were satisfied by wondrous words. So many scenes were done so — well Orlando’s wrestling match was super, his “aphasia’’ was performed with exquisite truth, the woman playing… Read more »