Future Anxiety is a vast, crisp ensemble play that brings you to the future by following through on everything that’s undermining our earth as we know and love it.  “Vast” even though it all takes place in The Flea’s rather small Off-Off-Broadway theater but when this talented group gets through with it — it seems positively epic!

Things we take for granted are in short supply — toilet paper’s doled out one square at a time.  Violent storms rack the sky interrupted by fires broad as the horizon — shades of today’s news of tornadoes and fires.  Radioactivity everywhere is a given.  When an awakened cryogen who hasn’t yet fully accommodated to her new body wants to go outside for some fresh air, the thought sends the nurse into paroxysms of laughter.  Oh yes, and China having collected on its debt, Americans are serving as slaves to the Chinese.

Karl, a man with a Jesus complex, played by Ugo Chukwu, is offering 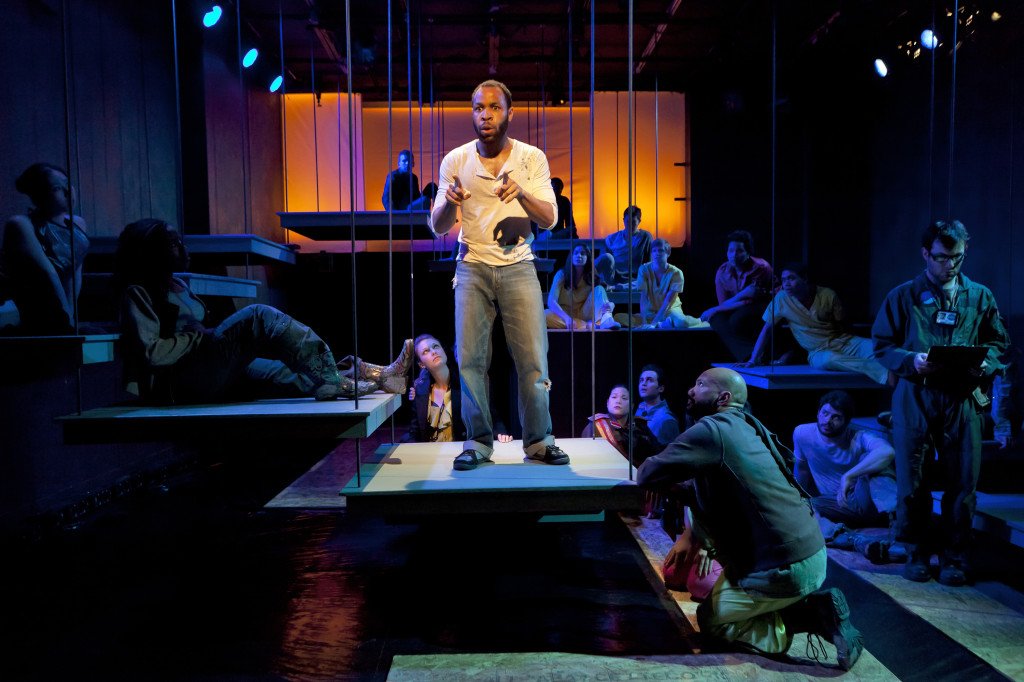 salvation via a space voyage to another planet but it’s clear that in spite of his manic optimism, the trip isn’t going to make it.  But is staying behind any better?  As a parable, Future Anxiety reminds me of Thornton Wilder’s optimistic The Skin of Our Teeth, but in reverse.

One reason the play manages to seem so big is that the set is a series of platforms on different levels, performance spaces for fast moving individual vignettes of impending disaster.  The actors are from the Flea’s young theater group, the BATS, which is a good thing because the staging and directing require outstanding agility and energy.  Reynaldo Piniella (as Jake) leaps at full twisting speed from level to another — but he makes it!

A compelling aspect is that this future is not too distant and things are not all that different from today, only worse.  The population that’s crowding the planet isn’t 40 billion or 200 billion — it’s 12 billion (today, approximately 6.9 billion).  Sonia (Katherine Folk-Sullivan), the sweet girl with the mean job of people collector (like house re-possessor) munches a bag of chips she’s found somewhere with an expiration date of 2012.

Among the excellent performances, Holly Chou’s as Comrade Li, in charge of U.S. debtor-slaves, is a genuine show stopper.  The expressions that cross the face of this martinet party-liner who finds liberation in poetry are in  themselves a reason to go to The Flea and see the show.  I’ve never  seen anyone carry a bucket on stage that looked so genuinely heavy as when Raul Sigmund Julia as the slave-poet Malcolm labors under her eagle eye.  Same when he digs his shovel into a pile of rocks. 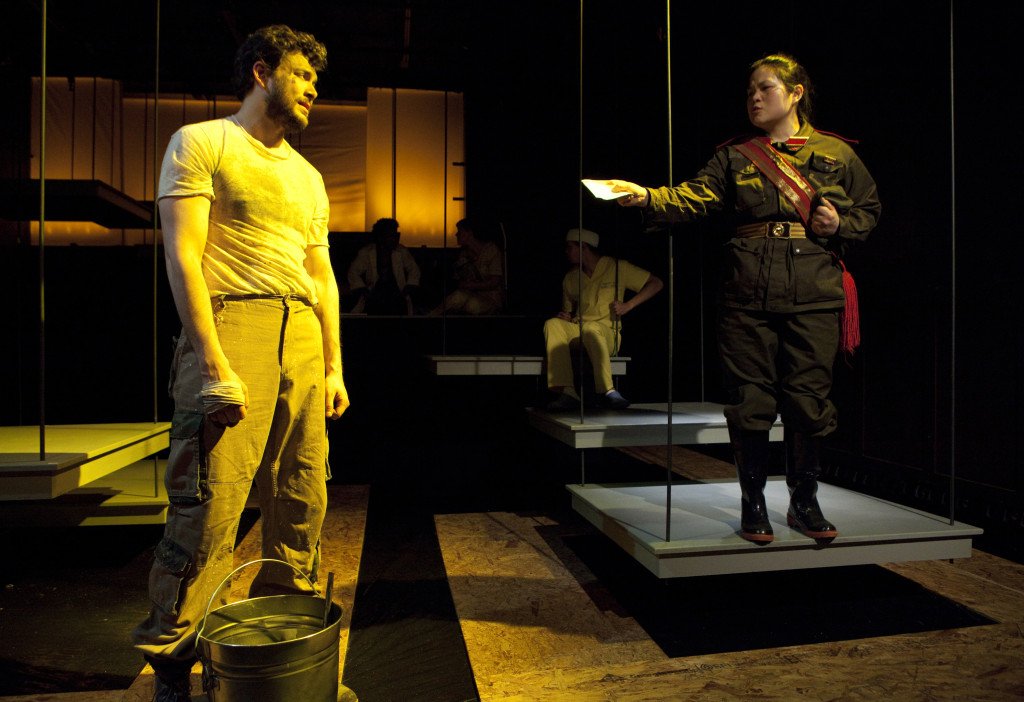 Raul Sigmund Julia as Malcolm sets down his heavy bucket for a moment as Holly Chou as Comrade Li profers a creation. Photo: Richarde Termine

While not the first future dystopia by a long shot, Future Anxiety rings a new and important bell:  a growing sense of guilt among human beings about the state of the planet and, joined to it, a negative assessment of our own kind.   In expressing this point, the role of the poet, Malcolm, is key.  Malcolm is given a chance to be free of his slave labor, but he’s so burdened by a sense of guilt for what human beings have wrought on this planet that he prefers to remain a slave, rather than add his hand to the destructive work of those who play responsible roles in this world.

There’s some brief but wonderful use of constructed masks/dummies, like the one Karl makes to replace his beloved but estranged Christine (Joy Notoma), leaning his head against it and draping its limp puppet arm across his own chest in a poignant-though-you-know-it’s-a-dummy moment.

For some of its jokes the play relies too closely on Sarah Ruhl’s Dead Man’s Cell Phone (I know it well because I acted in it).  Future Anxiety doesn’t need anybody else’s jokes, though.  It’s fired by the underlying seriousness that makes for the best humor!

Future Anxiety plays at The Flea Theater in NYC’s Tribeca through May 26th.

Sure was — and fun to think back on, too.

Yes, and I’ve found the Bats are really worth seeing in everything they do.

The Bats are wonderful in this extremely good commentary of what our present may foretell our future. This is both political satire and allegory based on our present and not too far in the future reality. An evening of really good and purposeful theater –wish there was more like this out there.