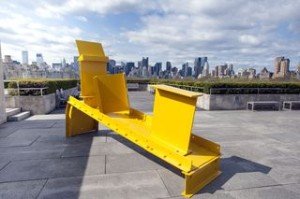 There are two ways to think about a sculpture exhibition on the MMA’s roof — the pleasure of being there, surrounded by rosy sun-lit skyscrapers in one direction, Central Park in another, the big sky and fresh air.  And then there are the sculptures themselves that are set against this gorgeous backdrop.

This year the roof is given over the eight large works by the British sculptor Anthony Caro (b.1924).  Caro had a really important idea in the early 1960’s — to use found industrial metal parts, already made but able to be altered, to construct large sculpture.  It was a key contribution, a further development from the use of found objects or ready mades for the creation of art discovered by Dada artists in the early 20th Century — one of the greatest inventions — if not the greatest — of modern art.   And boldly he sets his works directly on the ground — no bases.  In contrast to his work in the new-for-art material, Caro’s forms remain conservative, though, in the Cubist tradition.  Still, he grows as a sculptor — and all this can been seen in the current mini-retrospective on the roof.

For instance, the earliest work in this exhibition, Midday of 1960 (illustrated top of page), is constructed completely of I-beams, cut and arranged in a kind of bench form, 12 feet in its longest dimension, and painted all-over yellow.  In it, he pulls away from the swooping curves and organically felt figures of the British sculptor Henry Moore, whom he’d worked for in the ’50’s.  Newly arrived in the U.S. , he’s fallen in with a forward-looking  group of young American  abstract artists.  He expresses his excitement:  “America made me see that there are no barriers and no regulations.”  It’s interesting, though, that while looking forward in his materials, he bypasses the most liberating aspects of the American artists he met, David Smith, Kenneth Noland, as well as of Moore himself.  Caro translates some of the more abstract aspects of Cubism into large scale sculpture of industrial metal. 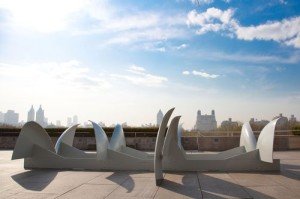 But after this straight edge period — a young artist’s reaction to the notably swooping curves of his mentor, Moore — he allows curves to creep back into his work.  At first the curves are a kind of mathematical sections, as in After Summer of 1968, above, a piece that’s softened by its outdoor setting, where it takes on the breezy suggestion of an armada of sailboats, or Viking ships … or ancient Minoan “horns of consecration.” 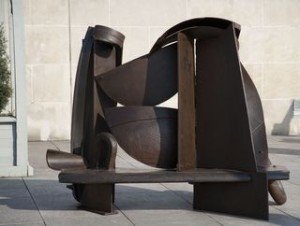 In Odalisque of 1984, the curves begin to suggest the organic;  it’s even somewhat representational — a woman.  Odalisques — exotic, reclining women, and a favorite theme of art — are almost inevitably curvaceous.  Caro’s Odalisque conveys the shapes — fundamental relationships of masses — of a woman with her perky little head and voluptuous body, comfortably reclining with bent knees, leaning on her elbow — a monumental cubist rearrangement, rendered in steel with Picasso-esque wit. 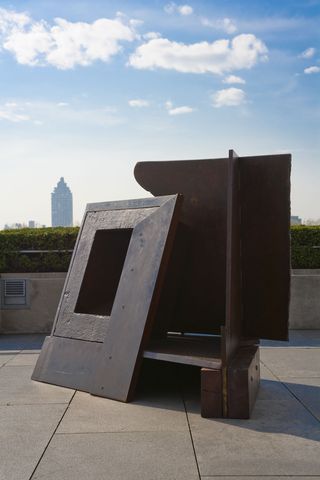 old sculptor a release from Cubist restraints beyond anything he’d reached so far.  End Up of 2010 looks at first straight-line geometric but — check this on the roof — there’s a really wildly suggestive curving form squiggling between the larger metal pieces.  With a little imagination it becomes X-rated.  Also, he brings back with End Up  a crafted wooden base.

And in an interview among his roof-top sculptures, Caro, charming, articulate, friendly, and alive to questions, told us that currently he’s hard at work designing a three-block long sculpture for the median grassy strip of Park Avenue in NYC — unless (he says) it grows longer! 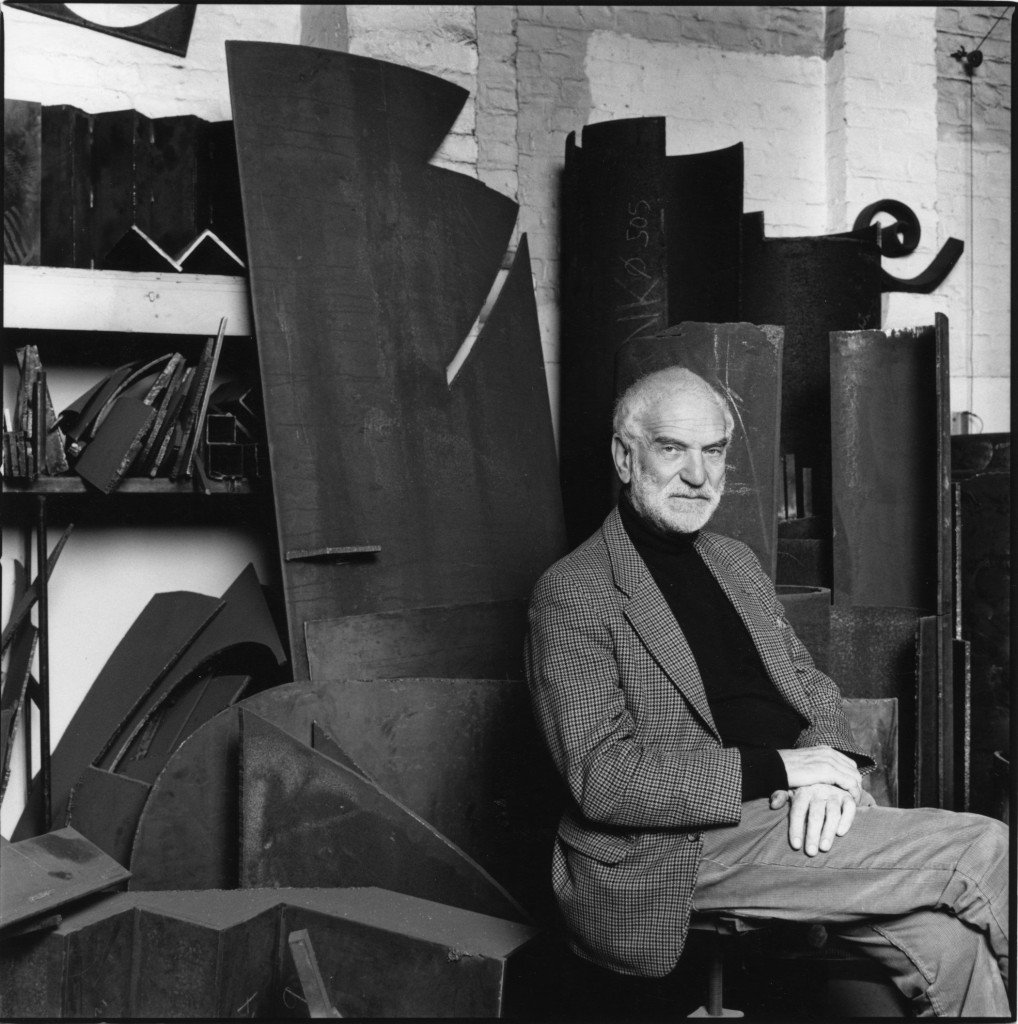 Anthony Caro on the Roof will continue at the Metropolitan Museum of Art in NYC through October 30, 2011.  Museum hours:  Tues – Thur 9:30 a.m. to 5:30 pm, Fri and Sat 9:30 am to 9:00 pm, Sun 9:30 a.m. to 5:30 pm, usually closed Mondays but check with the Metropolitan Museum of Art website  (click on link) for holiday dates, and suggested admission prices (suggested so don’t stay away if you don’t have the full admission –pay what you can).  The exhibition “Anthony Caro on the Roof” is included with your admission.   Refreshments are available for purchase on the roof.

No tents, but they select works that are on the durable side like these massive steel often enameled sculptures. The year before, it was a big interlocking bamboo stucture and bamboo is fairly impervious to rain. Still, none of this would last forever open to the elements … I was out of town for the critic’s opening of this year’s rooftop exxhibition but I’m going to visit it shortly and will write about it.
And yes, as you say, the openness and breadth of the rooftop is really a wonderful place to see sculpture.

How did they protect those artworks from the weather? Hm, did they put up a tent on the rooftop? Anyway, this must be a huge and fun event for those who like seeing contemporary works of art. It’s a good thing the display area was spacious too. I mean, by the looks of those photos, I can tell that the rooftop is wide. I’m sure there was ample space for visitors back then to fully enjoy the beauty of these artworks.

It’ll be fun to see what exhibit they have on the roof this coming summer … we should be hearing about it fairly soon. And thanks for writing in … Yvonne

Wow! I’d love to see all these pieces up close. And what better way to showcase them than in rooftops? This is certainly one of the best exhibits I’ve ever heard of.

Caro said he had wanted to display MORE sculptures in the exhibit but the Met said the roof might not hold the weight!

Looking forward to Caro’s three-block long sculpture planned for Park Avenue. And this summer his sculptures at the Met roof garden is the perfect location for a rendezvous!

I hope you have a peak experience when you go there — hey, you never know…!

Thank you for your exciting review of the Caro show. You make these oddly assorted pieces of metal come to life, and the rooftop experience peak. I can’t wait to go!
Nan

I love the concept of the sculptures; modern and at the same time, nostalgically captivating. They certainly were done by a true artist, and a visionary. Thank you for the great blog post about this.

I’m really glad you checked out the hyperlinks — thanks!

Thank you so much for your very insightful analysis of these sculptures. This really adds to the pleasure of seeing them and how they are in the grand tradition of Art. Also appreciated your judicious use of the hyperlinks.