Dr. Knock (the first K is pronounced as in Evel Knievel) probably doesn’t have a degree in medicine but that doesn’t stop him from practicing it.  This play is about a quack doctor but — most of all — it’s the study of a really terrific con man on the job.

As the play opens, Dr. Knock is taking over from Dr. Parpalaid whose provincial practice he’s purchased on an installment plan.  At first, the older Parpalaid seems to be taking advantage of this nice, new young man Knock by working out the payment schedule to his own advantage — a beautiful red herring since it’s nothing compared to the way Dr. Knock is going to con the world, or for starters the 2,000 souls in and around St. Maurice, France.

The local populace isn’t in the habit of visiting the doctor more than once or twice a year.  Knock sets about building his practice by advertising, through the Town Crier, free consultations.  This brings in some patients — a rich and seductive old lady, a couple of tough guy pals, the Town Crier himself.  Once they’re in his office, Knock begins diagnosing dire illnesses, thrashing around with the stethoscope, flipping pages of medical diagrams, each diagnosis playing on the “patient’s” particular insecurities.  And the first Rx?  a week of total rest in bed on a starvation diet and let’s see how you feel at the end of it:  if the patients don’t “improve” on this regimen, it proves he’s right, turning them frantic and making them totally dependent on his remedies, no longer dished out in free consultations.  Oh yes, they’re told, don’t talk to anybody about the treatment, no comparing notes allowed.

At each preposterous build of Dr. Knock’s fakery, the audience takes in the contrast between the truth of the matter and what the patients are led to think and it’s hilarious.  Laughter builds.  What a relief and delight — we’re really in the hands of a great comedic playwright.  What a pleasure to feel confident that this writer is going to keep you having a good time.  If you like to laugh — and what a wonderful feeling it is — don’t miss Dr. Knock!

The practice grows.  By the time Dr. Parpalaid returns to collect payment, Knock has turned pretty much the whole town and environs into imaginary invalids.  There are so many “sick” patients the local hotel has been turned into his clinic — “and when the new wing is complete it will be even better!”  Dr. Parpalaid is paid back alright — and with an awful lot of interest for the trick he played on Knock.

We, too, are paid back, with a powerful view of the anatomy, and dangers, of a con-game, and on a broad, social scale.  Laugh, enjoy, but keep you eyes open!  Oh, yes, and compare notes.

Thanks to the Mint Theater for bringing us Doctor Knock, translated from the French and directed by Gus Kaikkonen.  The cast, direction and sets are all just what the doctor ordered.  Thomas M. Hammond is wonderfully smooth and wicked as Dr. Knock.  The visit of two farmers to the doctor’s office, played by Scott Barrow and Chris Mixon, is a high point.  Patti Perkins is deliciously funny in her transformations, from the opportunistic Madame Parpalaid, to the seductive patient, to the dutiful, nun-coiffed maid in the clinic.

Doctor Knock, Or the Triumph of Medicine plays at The Mint Theater on West 43rd Street through June 6th. 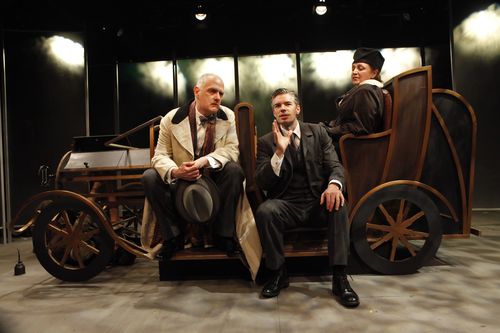 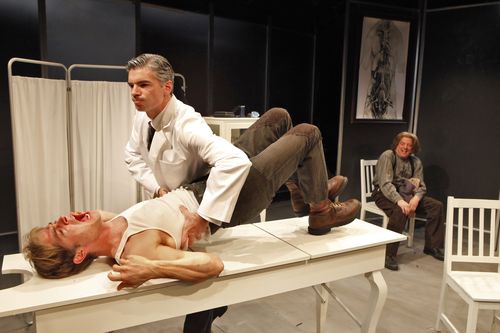 Scott Barrow as a farmer in the neighborhood gets the treatment from Dr. Knock while Chris Nixon as his  friend looks on.  Photo: Richard Termine

Book Note | The Help | A Novel by Kathryn Stockett

It was such a good show — and yes, no e-records! Thanks a lot for writing in. Yvonne

This play, very well done, has special pertinence to the substantial problem of the United States all too expensive (>16% + of GNP) for medical care with mediocre results for the population as a whole – we don not love too long and those countries who pay half of what we do live longer. The play wonderfully illustrates the ability of the medical profession to maximize its profits by being paid on the basis of fee for service instead of a fee to take care and prevent illness. The sicker – real or imaginary – the patients are the more… Read more »