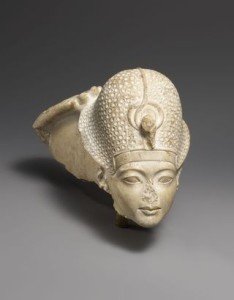 A “blockbuster” exhibition of treasures from the tomb of Tutankhamum, “King Tut NYC Return of the King” will be opening in near Times Square in NYC April 23, 2010.  It will be filled with lavish and stunningly beautiful works in gold and other precious materials, and the art will show the pharaoh Tutankhamun as a mighty conqueror of Egypt’s enemies, a great hunter of wild animals, and a victor over death itself.  It will be a great event — see it, if you can get tickets.

That’s another exhibition but don’t miss this one — and you can get tickets easily, just visit the Metropolitan Museum of Art.

By being smaller, less gleaming, more intimate, it shows the other side of the coin, and a greater truth.  Tutankhamun was not a great warrior but a frail, sickly youth who died young, at 18 or 19 years.  He could not in his short reign vanquish Egypt’s enemies.  He could not conquer the wild animals of Egypt with a colossal bow bigger than all of them, as he’s shown doing in the art from his tomb.  And as the Met’s exhibition, which brings together artifacts associated with his burial rites and the mummification of his body makes very clear, he was unable to conquer death.

Bandage woven for use in the mummification of Tutankhamun but not used. L 164 cm (64 5/8 in.), linen. The Metropolitan Museum of Art. Gift of Theodore M. Davies, 1909. Photo: Museum

Here, for example, is a strip of linen meant for wrapping the pharaoh’s mummy — this piece was left over, discarded by those who mummified his body. This show is truly close to the moment, and fascinating.

And here’s a floral collar or necklace: now it’s brush-dry but, for the funeral, it was fresh, vibrant, living — brilliant  with leaves of olives and persea trees, and petals of lotus, cornflowers and bright berries.

How did these extras, throw-aways from the young king’s funeral preparations over 4,000 years ago, find their way to this exhibition? 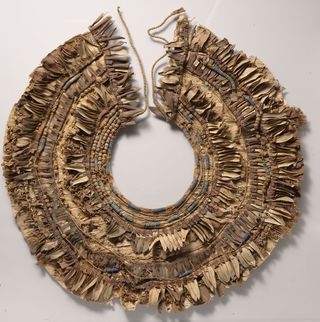 Tutankhamun’s tomb was discovered by Howard Carter in 1922 but earlier, 1908, Theodore Davis had discovered several storage jars near where the tomb would later be found, and some of what was crammed in those jars was given to the Metropolitan Museum.  Much of the material in this exhibition comes from those storage jars — broken pottery, bags of natron used during mummification, small sacks of sawdust for filling out the shapes of mummies, the floral collars used to celebrate the continuation of life after death, and linen bandages and embalmer’s aprons.  These objects, with explanations of their use in the funerary process, along with paintings and other artifacts, help us visualize ancient Egypt, Tutankhamun, and the activities around his funeral, for this fascinating exhibition.

Tutankhamun’s tomb was small, evidently because he died so young, and for that reason it pretty much escaped the looting that cleaned out the valuable objects in all the other tombs of the pharaohs.  That’s why when Carter discovered it there was so much inside to find:  lavish objects and works of art of gold and other precious materials, that will be seen in the forthcoming “King Tut NYC” exhibition.  These are the ones that show him as a mighty warrior.

But he wasn’t a mighty warrior. This exhibition, along with other recent research, including DNA studies, have illuminated much new about Tutankhamun.  He was not, in his short reign, able to amend the great inroads of Egypt’s enemies, enabled by the laissez faire military policy of his father, Pharaoh Akhenaton, the first monotheist, who was more interested in his novel philosophy and religion than in preserving Egypt’s imperial strength.

It’s not known whether Tutankhamun wanted to preserve his father’s philosophical and religious legacy but one thing is clear:  he didn’t.  The style of art, called the “Amarna style,” inspired by his father’s new and heretical faith in the single god, Aton — the sun disk — barely persisted into Tutankhamun’s reign.  The conservative, anti-Akhenaton forces took over immediately after Akhenaton’s death, destroying the town, “Amarna,” Akhenaton had established, banishing all traces of the Aton god Akhenaton had worshipped, and quickly setting Amun, the traditional chief god of Egypt, right back in place.  That’s why the tips of Amun’s fingers are supporting the head of the young Tutankhamun in his portrait illustrated above.

A facsimile painting of funeral rites taking place in a verdant garden, awhile before Tutankhamun, helps to bridge the gap between the artifacts and the vital event. 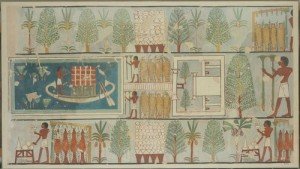 Joie de vivre and a frantic desire for eternal life join hands in the Met’s exhibition on the Funeral of Tutankhamun.

… and I’ll have to wait awhile to see Cairo’s new museum … but I sure would like to some day.

Just amazing, Egyptians built an incredible civilization.
I wish I was there, but I think I can wait till they come back to Cairo’s new museum here.