Beyond the Text: Artists’ Books from the Collection of Robert J. Ruben, originally shown at The Grolier Club in New York City March 25 through May 28, 2010, is now opening March 3, 2011 at the Bailey/Howe Library of the University of Vermont, http://library.uvm.edu/news/?cat=3

Artists’ books take a leap beyond the kind of text and illustrations normally associated with the book to carry the viewer to new vistas of emotion and intellect.  Some artists’ books arrive on our visual doorstep bearing humor while others — all in mixed degrees — convey intellectual challenge, or emotions such as awe or joy.  Some are embassies from the dark side of human experience.

The Grolier Club’s exhibition, Beyond the Text:  Artists’ Books from the Collection of Robert J. Ruben, includes over 60 examples of accordion books, codices, scrolls, box books, pop-ups and tunnel books, in every variety of mixed media.  Some are by artists of international renown, others by new artists forging their creative paths.  Some of the books have previously known texts by writers such as Walt Whitman and Herman Melville, and others have new texts or no texts at all, and the subject matter ranges from political, argumentative, ironic, lyrical to tragic.

For example, the giant pop-up Back to a Remembered Time by Paul Johnson shows a complex house-like form made up of many windows, entrances, and restive spaces, all with a dazzling range of colors.  Opening its kaleidoscopic wings, the viewer opens to a sense of joy. 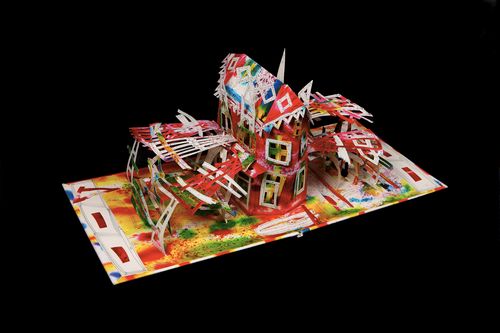 Back to a Remembered Time by Paul Johnson, photo by Robert Lorenzson

Incantations is the first book created completely by Mayan people in nearly five hundred years, since the Mayan libraries were burned by the bishop of Yucatan.  Over 150 Mayans from all walks of life collaborated as writers, illustrators and paper makers working with the Taller Lenateros –Woodland Workshop.  The illustrations are accompanied by poetry written in the Mayan languageTzotzil, with English translations.  The Mayan women who produced the poems say they were written by the Earth, the Moon or the Sun, and come to them from books of their ancestors shown to them in dreams. 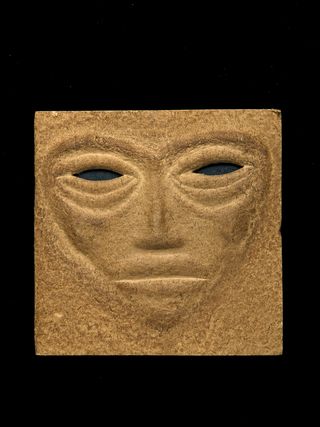 In another mode, Julie Chen’s 60″ wide masterpiece Panorama heightens awareness of the fragility of our earth’s capacity to support life in the face of climate change.  Past a panorama of rocks, and of a town, the book opens with a double-page spread, illustrated below, of a stunningly constructed perspective of the earth’s surrounding spheres:  troposphere, stratosphere, mesosphere, thermosphere (400+ miles out). 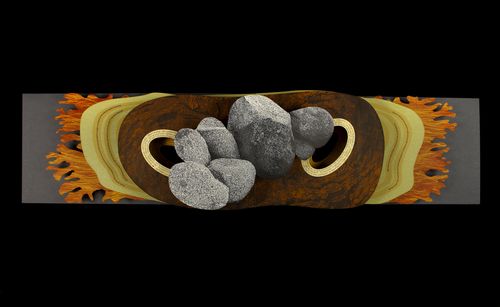 Robert J. Ruben, the collector and Yvonne Korshak, art historian and writer on cultural events, have collaborated on this project, co-curating the exhibition and writing the catalog that accompanies it.  This catalog is the first book in print to consider artists’ books not only descriptively but in terms of their meanings and iconography.

For what it’s like to visit the exhibition, see the vivid commentary at http://kyleolmon.com/blog/2010/03/25/beyond-the-text/