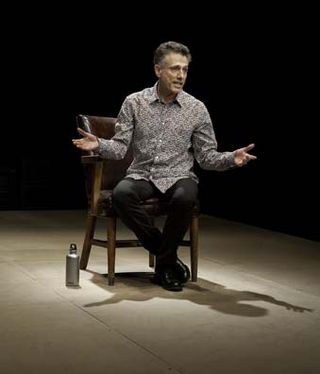 David Greenspan has all the characteristics of a fine performer — he’s charming, is an excellent actor, has an expressive voice and body, and is an exceptional impersonator, but what makes what he does essential to see is that he’s so smart.  He “gets” everything, just like you do.  It’s so satisfying — and validating!  You feel in your heart yes, I understand, yes, I know just what you mean.  At last!

Whether he’s delivering on the words of Aristotle, or Gertrude Stein or his own Myopia, his subject is that thinking matters and his delivery follows the rhythms of awareness: it’s irresistibly fascinating to watch him do it and share it with you.

In The Myopia, there’s a stage, a chair, a bottle of water, and David Greenspan.  That’s all that’s needed for worlds to open up for you — and the ones he chooses are often preposterous and totally liberating.  It’s a varied, exciting cosmos with unexpected events and rich characters evoked through description, “Light illuminates Warren G. Harding, immobile, seated in an easy chair in his room in the La Salle Hotel, Chicago, June 12, 1920,” and through impersonation — you’ll find Carol Channing engaged in vital conversation in The Myopia.  You believe he’s who he’s impersonating even though he makes no attempt to look like that person: in a riff, I could have sworn I heard Al Jolsen’s rising tenor.

To the extent that there’s an easily stated subject, The Myopia is a quest to understand the truth and power of drama and some episodes involve a playwright hiding out in the bathroom (what can one say? — it is hard for writers to get the isolation they need).  The play, or maybe it’s a musical, is about how Warren Harding became President on a wave of corrupt politics (How’s that for a musical?).  In spite of Herculean efforts on all fronts by the guy with the typewriter in the bathroom, the authorship is in doubt since an electronic orb resembling my roomba (robot vacuum cleaner) named Barclay also claims in his R2d2 voice to be writing it (or is the author Barclay’s father?).  I found the orb ridiculous (I even got a little bored with it) but never with the overall stream of brilliant consciousness that is David Greenspan.  He overcomes the loneliness that separates humans — a definition and achievement of great art.  When it’s over, you’re already looking forward for the next chance you’ll have to share Greenspan’s vision, bridging the impossible — to see another’s inner view outward, through his eyes, his myopia.  Congratulations to the Foundry Theatre and Melanie Joseph, Artistic Producer, for bringing us this outstanding writer and performer in an essential event.

It’s not surprising that Greenspan is taken by Aristotle on the art of theater, and Gertrude Stein’s stream of consciousness: in his dramatic readings of their works, you see the writer figuring it out.  Weekends during the run of The Myopia, you can see it as a “double feature” in combination with his Plays, a lecture by Gertrude Stein (his earlier production reviewed here February 2009).  See both.

The Myopia plays at the Atlantic Stage 2 in Manhattan’s Chelsea, through February 7th.

You have so well portrayed David Greenspan – he is a remarkable talent both as actor and writer. He brings to our time a profound sense of the human condition its foibles and its greatness. Wish that there were more like him! The Foundry Theater does us all an excellent service by giving Greenspan a platform/vehicle so that we can all share in his greatness.