We’re in the flapper age!  Millie Dillmont, the girl from Kansas, arrives in New York City in 1922 with her head filled with a “modern idea” — she’s going to get a job and marry the boss so she’ll be rich.  If you think about it, marrying for money rather than for love isn’t a very modern idea to say the least but marrying the boss — that takes us to the time when women were first entering the work force in force.  And Millie is an independent modern woman — we’re drawn  to her self-confidence, practicality and determination to set her own course – to say nothing of the adorable modern hair bob cut she gets for herself soon after arriving in what today’s called “The Big Apple” – and it was a big bite back then too.

We follow Millie through her exciting experiences – speakeasy bars and high society cocktail parties — and we share in her disappointments – the boss she has her eye on to marry can only think of her as a typist/stenographer.  She skirts danger in the form dreaded “white slavers” ready to prey on young girls and spirit them away to the mysterious orient for horrible reasons.  And everywhere we go with her, we’re enchanted by wonderful singing, dancing, and some of the funniest scenes written for musical comedy.

The cast is by-and-large excellent.  In particular, Ashley Hilary gives an all-out terrific performance as Millie.  Aria Saltini is enchanting as Miss Dorothy Brown, the sweet, long-curly-haired foil to feisty Millie.  Kiera Prentiss is beyond perfect as the wily, wicked Mrs. Meers – what a character!  And what a character actress the North Fork Community Theatre has in Kiera Prentiss.  And what a makeup job!

And if you’ve never laughed – or laughed before – at the shenanigans of the two Chinese men who – with varied enthusiasm — assist Mrs. Meers in her nefarious white slavery plot, here’s your chance to see Eric Momente as Bun Foo and Alex Bradley as Ching Ho on their knees singing with all their hearts like that early 20th century all-time popular singer A – But no, I won’t mention his name so as not to spoil the – hilarious – joke.

The dancers are a highlight of this production – some among them dancing on an exciting professional level though their names aren’t separated out in the program for me to mention – but Thank You!  The dancers and others provide a feast for the eyes of glamorous flapper dresses and 1920′ style.

And where else but at the outstanding North Fork Community Theatre will you have a fine, live twelve-person orchestra, led by Musical Director and pianist Karen Hochstedler! 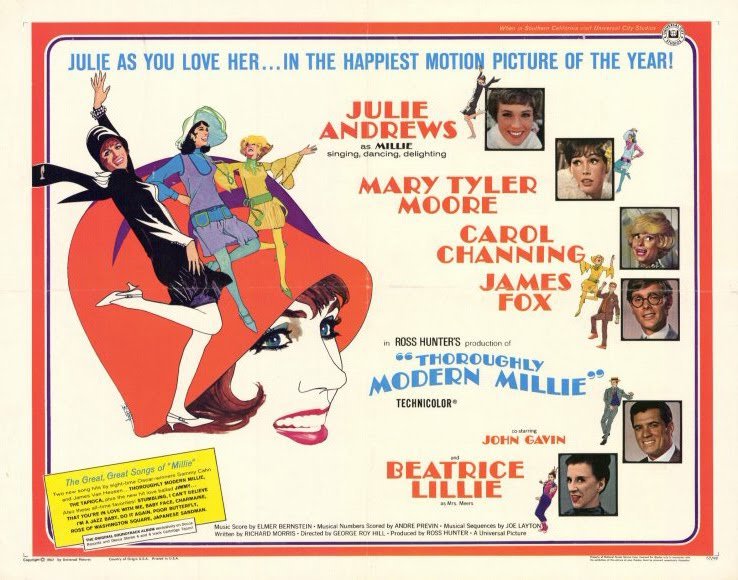 The stage production of Thoroughly Modern Millie, which first opened on Broadway in 2002, has an interesting history in that the movie — with quite a cast — came first in 1967 (see the illustration), based on a British musical, Chrysanthemum, of 1956.

The North Fork Community Theatre production of Thoroughly Modern Millie is directed by John Bradley.  It plays Thursday through Sunday in Mattituck, Long Island, through August 6, 2017.  For more information and tickets, click here.

Indeed, this was a delightful, fun evening of the hijinks musical presented with great enthusiasm and talent. Of the many great scenes – the tap shoe typist is one that I will always remember. Thank you, North Fork Community Theater.