This My Fair Lady is so good it made me feel that this wonderful show was even more marvelous than I thought.  I saw new things in it!  It’s thrilling! My Fair Lady originates in the ancient myth of Pygmalion, a sculptor who could never find the right woman to love. Finally he carved a sculpture of a woman so beautiful that, having created her form, he was filled with passionate desire and kissed her.  With his kiss – and thanks to intervention from the goddess Aphrodite — he felt the lips of the ivory image grow warm as the cheeks become rosy and the image took on the hues and feel of human flesh (I love the way this happens from top to bottom in the painting by Gerome  at left).  His ideal was transformed into a living woman. In terms of sexism, this lovely story is on a par with that one about Adam’s rib, though, unlike Adam and Eve, Pygmalion and his bride lived happily ever after.

With some transformations of his own, George Bernard Shaw took up the myth in his delightful play, Pygmalion, moving the story to early 20th century London, turning the sculptor into persnickety Henry Higgins, an expert on the English language, and turning the sculptor’s created beloved into Eliza Doolittle, a low-class girl with cockney speech eking out a living selling flowers whom Higgins’ transforms through his teaching into an elegant woman with upper class speech and elegance, whereupon he falls in love with her.

My Fair Lady, by Alan Jay Lerner (book and lyrics) and Frederick Loewe (composer) is based on Shaw’s Pygmalion.  The authors draw upon Shaw’s characters and dialog, and create brilliant transpositions of scenes, new wit, and songs that capture the characters, their situations and their emotions with breathtaking aptness, humor and beauty.  The whole is directed with refreshing vivacity and dramatic truth by Michael Ardens.

Selling flowers around Covent Garden Theater, Eliza Doolittle lets out a howl when her flowers are toppled by the careless rich, bringing her – and her “dreadful” cockney vowels, to the notice of Professor Henry Higgins, the expert on English language.  Higgins (Paul Alexander Noland), disdainful at how most of the English speak (that song:  “Why Can’t The English learn to speak.  These verbal class distinctions by now should be extinct”), remarks to Colonel Pickering (Howard McGillin) that with training, he could transform even this wretched girl’s speech into upper class English.  No fool Eliza:  she arrives at his house the next day wanting lessons so she can sell flowers in a shop instead of on the street. Higgins bets with Pickering that with his training he’ll be able to pass her off as a duchess.  Thus begins Eliza’s training in “proper English.” 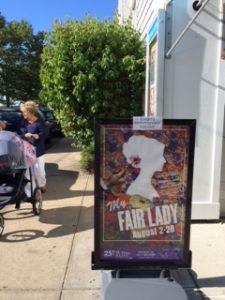 My Fair Lady playing at Bay Street in Sag Harbor, L. I.

The enjoyable scene couldn’t be done better.  Kelli Barrett is an enchanting Eliza with a beautiful singing voice (“Wouldn’t It Be Loverly?”) and piquant acting.  Nolan is an appealing stuffed shirt with a fine voice as Higgins.   Pickering (McGillin) is the perfect straight-backed tweedy Englishman.   And it’s our good luck that John O’Creagh as Eliza’s boozing “amoral” father (“With A Little Bit Of Luck”) couldn’t be better.  Farther along in the show, his rendition of “Get Me To The Church On Time” is so ebullient, so charmingly reprobate, so set off by an alluring large man’s shuffle-dance, that one cannot ask for more delight in this world.

The show continues pitch-perfect, delicious, all one wants. Higgins pushes Eliza to the extremes of endurance and Eliza has the gumption and determination to keep trying, to keep working.  Pickering, and Higgins’ housekeeper Mrs. Pearce (Karen Murphy) attempt to moderate the strain on her but Higgins isn’t about to soften his regime.   Anyhow, they’re two of a pair, aren’t they? – both unstoppable, working through the night.   Until that marvelous moment comes when Eliza gets it!

It’s all about vowels.  She finally in a sort of flash (hard-won flash) gets them right (“The Rain In Spain”), they are thrilled and so are we by the celebratory explosion of joy, they are in love – he may not know it but she pretty well does (“I Could Have Danced All Night”) and they try her new speech and ladylike poise at the tony horse races at Ascot in one of the funniest and most moving scenes in all musical theater.

Is the elegant, beautifully speaking Eliza taken for royalty at the ball?  Guess.  But the course of true love never runs smooth (in contrast with the myth), and Shaw introduced a clever and telling bump in the road.  It has to do with how when success finally arrives, the self-centered Higgins and Pickering congratulate themselves (“You Did It”) without it occurring  to them for a minute to congratulate the hard-working, hard-studying Eliza.  And Eliza is no sculptor’s passive ideal – she’s furious.

The cast, including the entire ensemble of singer-dancer-actors, is superlative.  Kelli Barrett is an even more wonderful Eliza Doolittle than Julie Andrews, I thought listening to the original cast recording a couple of days ago.   Barrett is lovelier and more sympathetic.  She adds to her beautiful voice, and dramatic strength an outstanding comic talent — what an expressive face!  She makes the brilliantly humorous scenes, such as that at the Ascot races, exquisitely funny.  As in, You’ve just gotta see this!

Paul Alexander Nolan as Henry Higgins also has his own hard act to follow since Rex Harrison, with his star power and unbeatable male maturity, created an iconic performance that’s hard to leave go.  Nolan succeeds in creating a more youthful, and energetic — if every bit as amusingly obtuse — Henry Higgins.  Not only that, Nolan’s strong singing voice brings out the full emotion dwelling in the great songs that chart the remarkable romance of Henry and Eliza — a huge bonus since Harrison wasn’t a singer.

As the love-lorn Freddy, Eynsford-Hill fills the theater with his beautiful voice singing “On The Street Where You Live.”  Carol Shelley as Henry Higgins mother  —  aristocrat through and through, and wise realist — has an arresting and charming stage presence.

The versatile, multi-level set enables some very effect interplay between what’s taking place front and center and what’s imagined.  When Henry Higgins, back  in his own sitting room, describes Hungarian rival in the science of phonetics, Zoltan Karpathy,  horning in on Eliza at the ball, Ryan Fitzgerald, zooming in from above as Karpathy does a gymnastic histrionic rendition of how he did it that’s as funny as anything in the show –and that’s saying a lot!

The only false note in this production comes at the very end, where the play has been revised to fit a contemporary feminist mode.  It’s a real let-down, as I felt, and heard on all sides as I left the theater.  A revision of this sort was totally unnecessary —  My Fair Lady is already feminist! And it has an ending that emerges organically from the vivid characters and the development of their relationship.  The show is much about making fun of the obtuse chauvinism of Higgins and Pickering and, when all is said and done, feisty and accomplished Eliza is the hero of My Fair Lady.

For the rest, this production of My Fair Lady is a gift of wit, joy, and great art.  Pure and simple, don’t miss it!

Oh Yes Yes Yes. I saw this production and feel i n love with My Fair Lady ~ all over again.

There’s real joy here. We’d add that the choreography in the Get Me To The Church On Time was terrific. Throughout, though, we see Freddy sitting as background — We were both letdown by those last minutes when it looks as though Eliza might go off with him. Much better to use Shaw’s ending or Lerner and Loewe’s.