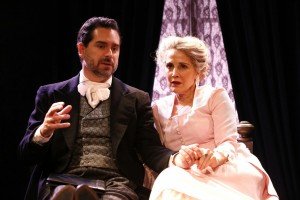 In the name of “crystallization,” Bergman’s paring down of Ibsen’s compelling play with its early feminist theme sticks to the plot but gives us fewer ways to know the characters.  It puts major, inner change on fast forward — making for an unconvincing drama.

In trimming down the play, Bergman omits the servants and the three children.  We’re told once that the children are with the nanny but never see Nora with her children, so when, in leaving Thorwald, she abandons her children, any conflict she may have is totally distant.  And how do these people eat?  She doesn’t cook or clean, a small mending job seems beyond her, and no servants appear either:  there’s no sense of a functioning household, although the nature of this doll’s house – and doll’s household — is of central importance.

In eliminating the nanny, Anne-Marie, Bergman has omitted a character with thematic importance in Ibsen’s play.  Anne-Marie had cared for Nora as a child and now tends Nora’s children and, for this employment, had given up her own, illegitimate  daughter to the care of others. Ann-Marie’s story is important enough for Nora to call it a “tragedy.”

Anne-Marie’s story is a thought provoking counterpoint to Nora’s. own story  As a woman of the lower class, under duress of poverty and the stigma of an illegitimate child, Anne-Marie gave up her daughter in order to take on the position of caring for children better placed in society.  Nora gives hers up in order to fulfill her thrust toward freedom and self actualization.  Is one kind of duress more powerful than the other?  More worthy?  More easy to accept?

In another inflection of the theme of motherhood, Nora’s childless friend Christine joins the widowed Nils Krogstad so that his children will have a mother and she will have a purpose in caring for others:  elimination of the character of Anne-Marie severs one leg from this tripod of meanings.

Torvald looses much of his sexist pomposity in Bergman’s version, making him less obnoxious, and more attractive, and more like a man who could pay attention.  Yes, he let Nora down but, as Christine knows, nobody’s perfect including her marginally criminal Krogstad.  But that has no effect on Nora.

Bergman sets the final confrontation between Torvald and Nora in the marital bedroom , a good idea but it’s here awkwardly staged.  Under the onslaught of Nora’s defiant speech – she’s dressed to leave, he’s nude in a super obvious  visualization of his new vulnerability —  this mature man  “covers up his nakedness” like a sinful Adam, wrapping himself in a blanket.  And since he seems like a man who could perhaps learn, Nora’s adamant decision harder than ever to accept.

The upshot is, he looks like a jerk and she seems cuckoo.

Events unfold so fast  in this trimmed version that Nora’s lengthy speech to Torvald at the end, in which she explains that how she must free herself in order to come to know herself, seems ideological — she sounds like she just completed a course on feminism —  rather than being an emanation of her developing character.

Nora, Torvald, Christine and Krogstad are almost always on stage, moving back and to the fore as their scenes are foreground, giving a good sense of the tight link between past and present.  Jean Lichty brings out the flighty responsiveness and also the womanly strength of Nora – she reminded me of Jennifer Jones as Madame Bovary.  Todd Gearhart manages to convey Torvald’s sense of male entitlement with humor and wit. 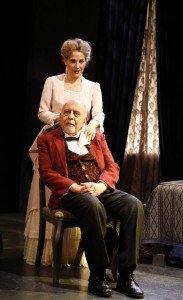 Larry Bull is appropriately menacing as Nils Krogstad, who turns gently tender when he recognizes another possibility with Christine Linde, played by Andrea Cirie.  The role of the mortally ill Dr. Rank is shortened in Bergman’s version but George Morfogen provides so rich and touching and totally believable a characterization of the smitten but dignified old man he fascinates and looms large.  I’ve seen him in many roles and never better.   Federick L. and Lise-Lone Marker’s translation  from Swedish finds the fine theatrical balance between generalized modern English and the special way people who know each other well, as all of these characters do, use language to express their connectedness.

I read a synopsis of the Ibsen play and agree that very significant portions hit the cutting room floor and made this more of a polemic than a drama. Ibsen’s Nora was much more believable than the current one. This is not the fault of the actress who was stupendous but the fault of the playwright and the director