When Hot L Baltimore premiered in 1973 at Circle Repertory Theater in Greenwich Village, it quickly became an award-winning landmark, bringing heightened awareness of New York City’s burgeoning off-Broadway theater scene, and endowing it with a newly recognized distinction.  If you’ve never seen it, the current production by T. Schreiber Studio is an excellent chance to get to know this legendary play.  What an evocative title!

It conjures up the run-down hotel in a southern city, with that missing “E” burnt out of its neon sign — hence the title — plus a hotel’s mix of characters who find refuge it what was once a ritzy place.  And hot (when it isn’t cold, the heating system’s unreliable), but also hot sexy — three of the hotel’s paying guests are prostitutes (it’s OK here to bring your Johns upstairs, and they do). 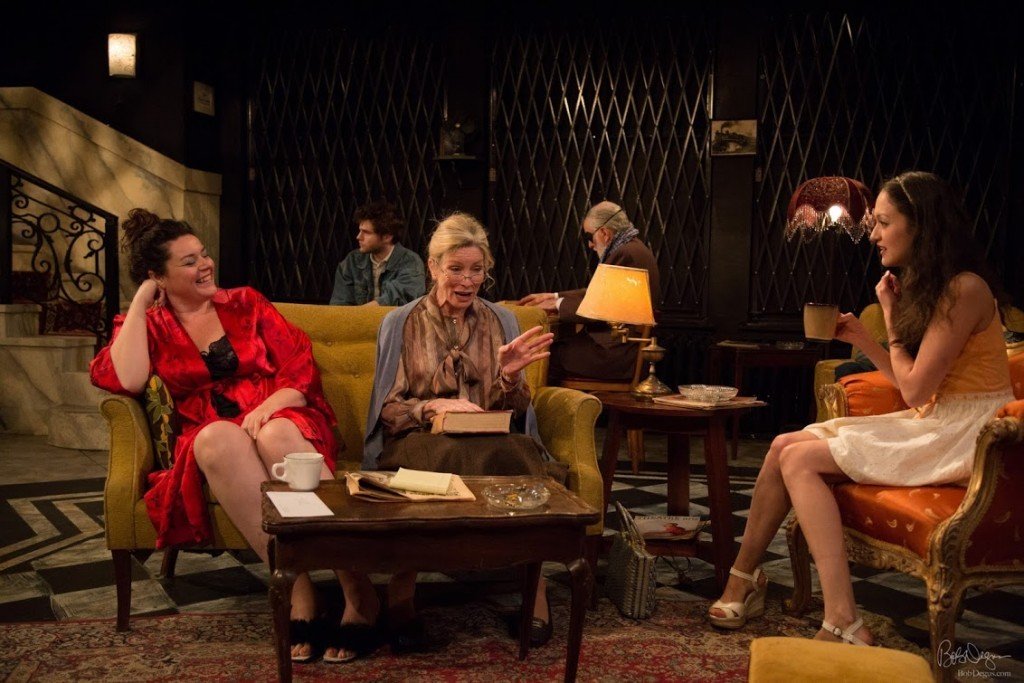 More atmosphere than narrative, the play moves through the conversations and interactions of the vividly delineated characters as they circulate through the shabby lobby with its seedy lounge chairs and elaborate chandeliers of an earlier, prosperous era.  A shadow of disaster touches everyone – notices have been sent out that the hotel will soon be demolished, but the characters, such as Millie, the refined southern lady  who sees ghosts, subtly played by Anna Holbrook, seem less ruffled by that then you’d expect for people who’ve dug in here as home. 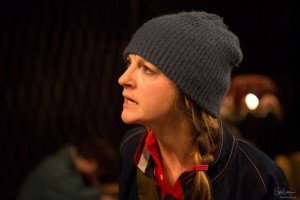 The nearest thing to a conventional plot is the quest of Jackie, a tough walkin’ talkin’ 1970’s tom-boy, played by Lisa Sobin in an outstanding, convincing and totally naturalistic performance – it’s hard to think she isn’t Jackie when the play is over.  Fiercely protective of her retarded (or autistic) brother, Jamie, she’ll do anything to get her hands on a car that will take the two of them to Utah and the “farm land” that Jackie purchased sight unseen from an ad on the radio.

Girl, the 19-year old prostitute played with the scripted irritating energy by Alexandra Hellquist, spills the tragic news that Jackie and Jamie have bought into a desert (Geography was Girl’s “best subject”). Recalling Hickey in Eugene O’Neil’s The Iceman Cometh  (reviewed here below),  Girl is fast talking, over-helpful and impossible to escape and, like O’Neil’s salesman of death, she destroys the pipe dream that kept Jackie and Jamie hoping.

Otherwise, though, the tenor ofHot L Baltimore is more Saroyan than O’Neil.  The mood seems an emanation of the author’s loving optimism toward his quirky characters, like that permeating the bar Saroyan created in The Time Of Your Life (reviewed here below), in contrast with the weight O’Neil cast on Harry Hope’s bar in Iceman.  April, a wise cracking, plumply comfortable and warm-of-heart prostitute, is like a den mother.  She’s richly played by Stephanie Seward, and with perfect comic timing. 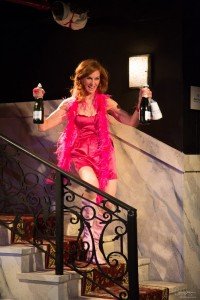 As Suzy, the coarse prostitute played all-out by Jill Bianchini says, “We’re family here,” and like families they denizens of Hot L Baltimore provide support, tolerate individual foibles, occasionally break out into rank conflicts, and save one another from disaster – when they can.

As an ensemble play, Hot L Baltimore with fourteen characters, several things happening at once, and some loose ends is a challenging and ambitious project.  We are fortunate that  T. Schreiber Studio has given us a fine staging of this complex, resonant, play.

Like the hotel itself, the characters maintain a touch of the gleam of their earlier selves, the glamour of innocence.  The overarching allegory that links the status of the hotel with the lives of the characters is the key strength of the play.  It’s not what it once was or seemed to be but its chandeliers, with their multi-facets, still burn bright.  And at the end, there seems to be a reprieve from the wrecking ball.  The play leaves us with hope ahead for more enjoyment, or just for the more that’s life for most, if not all, of the characters.

Hot E l Baltimore is Baltimore Street revisited. There are lots of things going on – sometimes too many – and there are many issues left unresolved – but oh well this is Baltimore Street. An interesting play and probably not as important now as more than four decades ago when it opened in the garage at Sheridan square – but still worth seeing.