Most of these six plays are sketches, some are better than others, and some bring you closer to Williams than others – which isn’t always the same thing.

The Resemblance Between A Violin Case And A Coffin by Beth Henley is about an over-close brother and sister, Tom and Roe, whose hot-house relationship with its submerged sexuality is upended when Roe, who gets her first period on stage complete with blood running down her leg (i.e., she’s reaching sexual maturity), develops an intense crush on a new boy in town, a violinist with whom she’s slated to play a recital.  It’s fun to recognize Williams’ dramatic themes – frail people living in dream worlds and thwarted, immature love. The playwright seems uncertain about what’s really causing his character’s, particularly Roe’s, troubles, and the role imagination plays in his character’s lives.

Tent Worms by Elizabeth Egloff is a distasteful play that didn’t need to exist about failed, nutty people on their annual vacation in Cape Cod – a writer who’s not writing but is going to dangerous excess to kill off tent worms and his editor wife who’s falling apart from the strain. 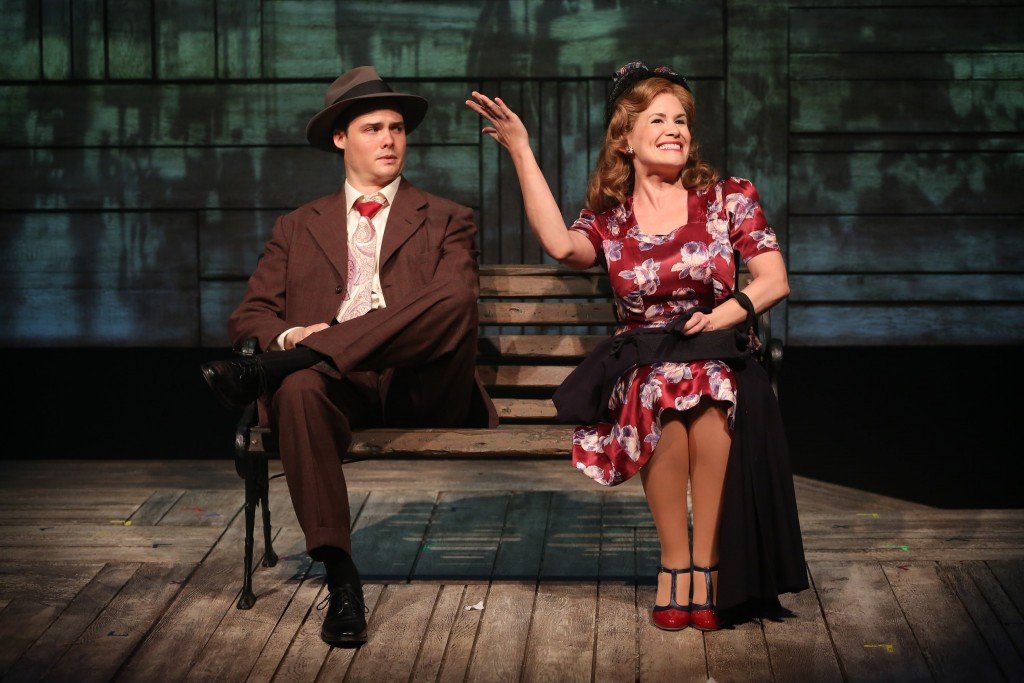 Mickey Theis and Megan Bartle in You Lied To Me About Centralia. Photo Carol Rosegg

In the most arresting play, John Guare’s You Lied To Me About Centralia, a woman, Betty, recounts to her fiancé, Jim, her fruitless attempt to get some money from her wealthy relative so as to buy a house she wants for their married life, the house representing the conventional aspects of marriage. Jim in turn describes his experience while she was out-of-town — a visit to the home of an odd, unpopular (probably gay) co-worker and the co-worker’s fantasy-ridden sister who gave Jim as he left a fragment of a glass animal (the original story’s title is Portrait of a Girl in Glass).  Betty barely understands what he’s trying to express about the encounter, and once she makes sure that the sister isn’t a rival and their marriage is still on, she doesn’t much care.  Jim, inevitably absorbed back into the conventional world, will carry a melancholy memory he’ll never fully understand.  The evocative theme, the sense of nostalgia, the writing (mostly monolog) and the acting, particularly that of Megan Bartle as Betty, the practical woman whose common sense feels burdensome to Jim, brings us closest to Williams, though this play is narrated rather than dramatized – think, in contrast, of The Glass Menagerie. 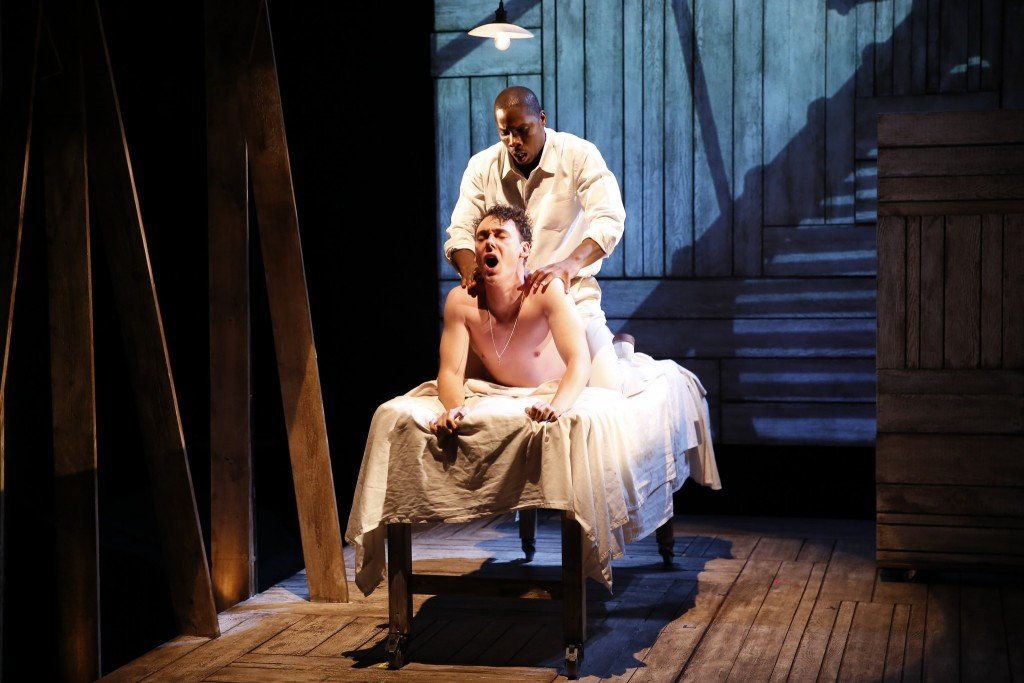 In Desire Quenched By Touch (adapted from the story Desire and the Black Masseur), Marcus Gardley tells a story that seems too weird, not that it couldn’t happen – anything can happen in the real world — but theatrically it comes across as forced and implausible.  In New Orleans, a Black masseur, Grand, a gentlemanly, polite man, is being questioned by a detective, Bacon, about a missing person, a young white man who, it’s known, frequented Grand’s massage parlor.  As the story advances, we learn more and more about the young man’s masochistic sexuality and the way he forces (or to does he have to force?) Grand to comply, until … well, I could have done without the ending, and so could the play.  It was well resolved before its gruesome tag end. 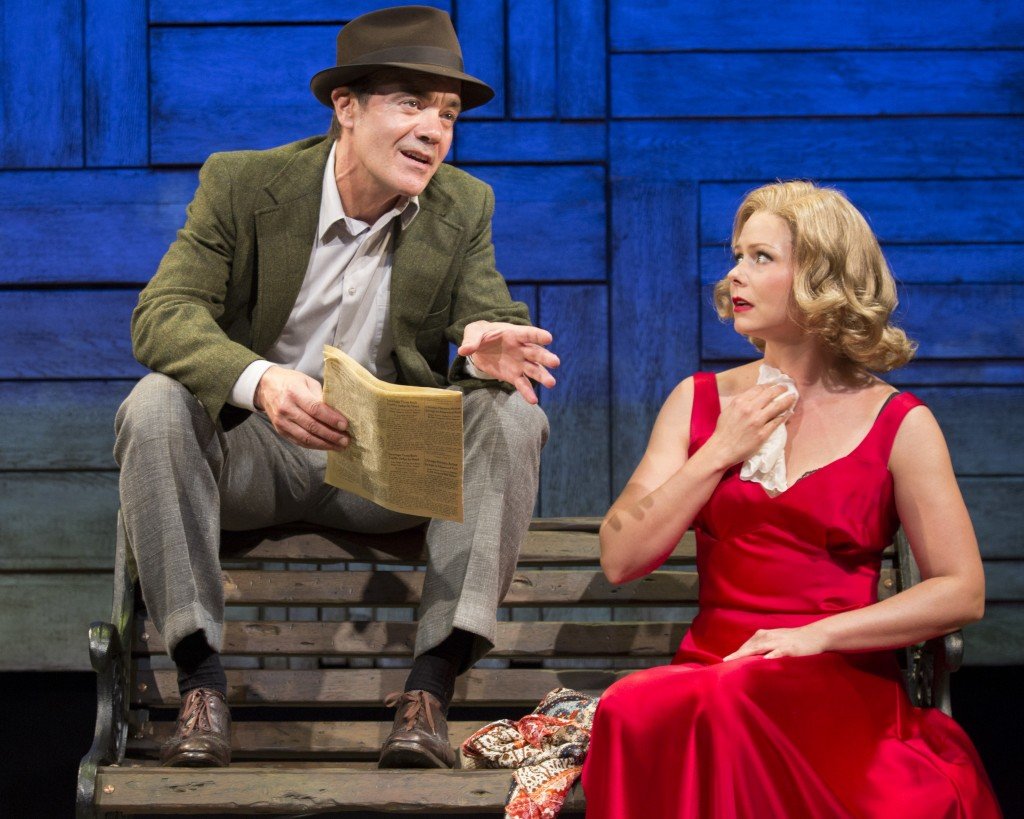 In David Grimm’s  Oriflamme, a sales girl, Anna, has bought herself a clinging, red evening gown and, after walking out of the store wearing it, in daytime, climbs to an isolated high point in the park where she enters a dangerous flirtation with a tough guy, Rodney.  He’s checking out the racing form but is alert for sexual adventure when Anna appears in the slinky red dress.  Amused by Anna’s high-falutin talk, disbelieving her talk of being “pure,” he’s ready to take advantage of her obvious emotional fragility.  You watch Oriflamme thinking of Streetcar Named Desire so it’s worth saying that Liv Rooth could do a good job as Blanche in Streetcar.

The final play, The Field Of Blue Children by Rebecca Gilman, has the audience leaving happy.  A young poet, Dylan, and a sorority girl, Layley, meet in a poetry class she signed up for because she had a sense of not having the words to express things she feels inside.  Their mutual attraction leads to a scene of hilarious sexual farce, marvelously played by Liv Rooth as Layley and John Skelley as Dylan:  tucked in under her gown, he performs oral sex on her while she’s standing up in the park, with her rattling off a patter of every day thoughts punctuated with exclamations as things heat up, using commonplace words and sentences to manage, and ultimately express (with a Joycean “yes”) the intensity of her pleasure. It’s plenty to make Dylan fall in love with her, but will she yield to the call of the poet?  Or end up with her conventional boyfriend?  If you look for it, you’ll find, as in Oriflamme, the unconventional (male) in an underdog battle with convention (female), but the Williams theme was drowned out by the titillating hilarity – and everybody loved it!

So one leaves laughing … but with a question:   Why adapt short stories of a great, prolific playwright into plays?  Tennessee Williams’ many one-act plays , reflecting themes in his major works, are often produced, for example, the three wonderful one-act plays — 27 Wagons Full of Cotton, Hello From Bertha, and This Property is Condemned — played together under the title Something Wild recently reviewed here. Echoes of Williams’ rich characters and fascinating conflicts draw you in to some of the plays in DESIRE, but at times the evening flagged.  And none of these plays matches the quality and force of Williams’ own short plays.  For gosh sakes, if Williams wanted these stories as plays, he would have written the plays – and he did.

DESIRE is directed by Michael Wilson, and produced by The Acting Company.  It plays at 59E59 Theaters in midtown Manhattan through October 10, 2015. 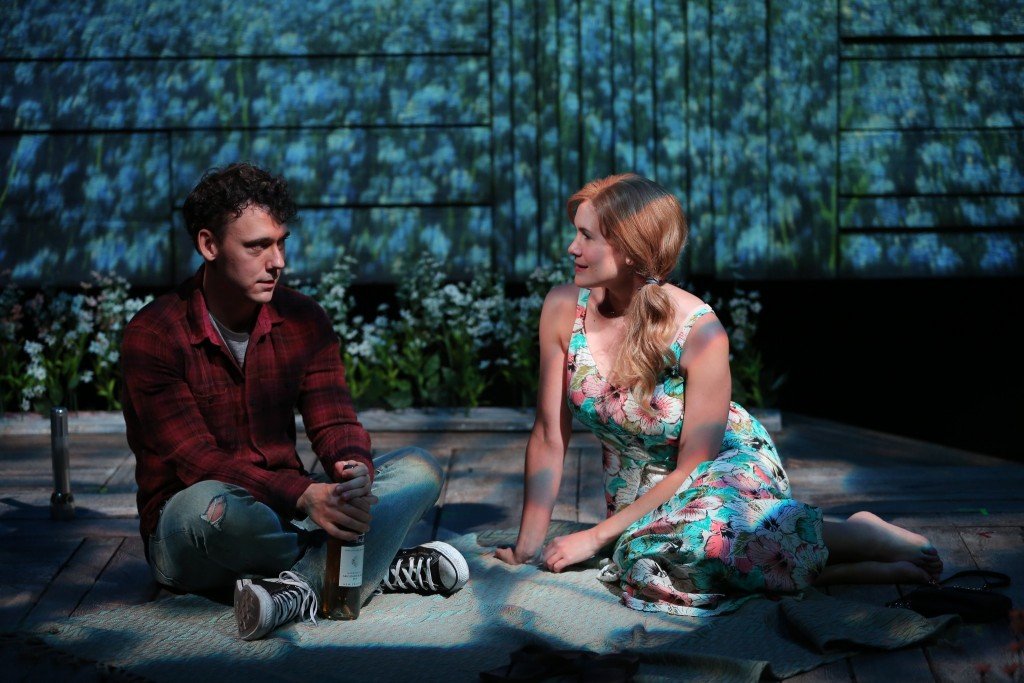 These sketches of plays really sound interesting – I hope that I can get to see them for I’m a great admirer of Tennessee Williams. Thank you for all the detail in the references.