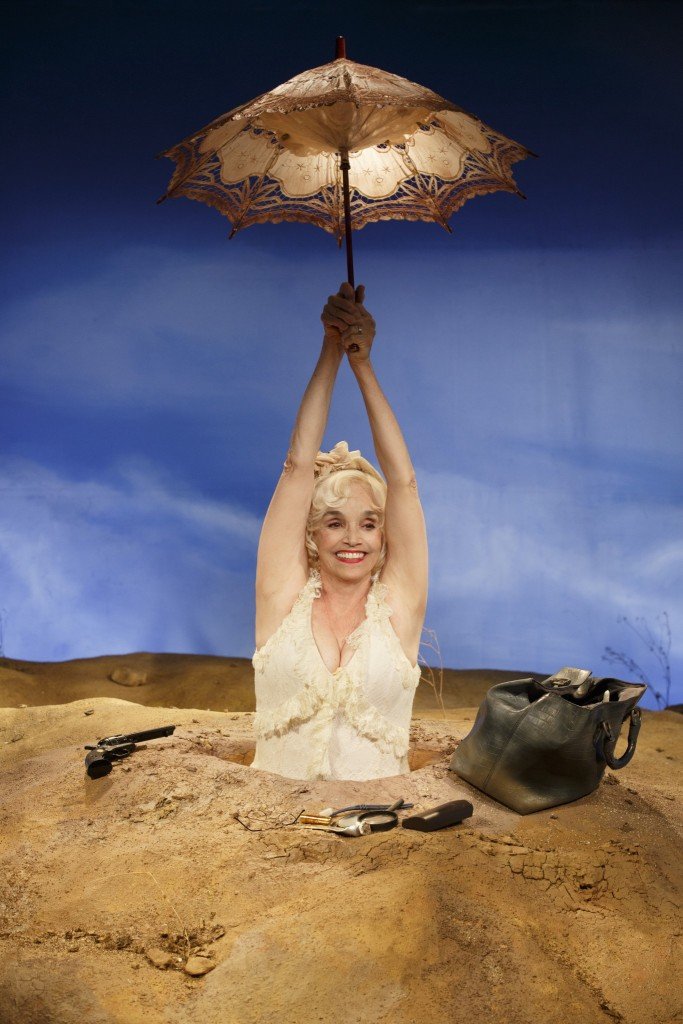 Making the best of it … Brooke Adams as Winnie. Photo Joan Marcus.

Brooke Adams’ Winnie is as great a tour de force as I’ve ever seen in theater.  As she speaks, what’s everyday for most of us becomes, for this poetically, physically, allegorically limited woman, heroic.   Adams is “on” most of the play, it’s a near monolog, but Tony Shalhoub as Willie balances her greatness, reduced in old age to strain against his set of physical limitations to save her.  Brooke Adams and Tony Shalhoub in Happy Days are breathtaking.

Here’s how it goes:  In a surreal world, the sun blazes down on a low, desert-like hill where we see Winnie, her lower half buried in a hole and the upper above ground, like a marble bust only this upper half is a real, colorful, vivacious woman.  Not young, though, she’s a blowzy blond with bleached hair and a frilly decollete, but even in old age you can see her beauty and sex appeal.

Improbably, half dug in to the earth as she is, she begins her day brightly, pulling from her purse, her toothbrush and other items and getting her day going.  It’s worth seeing this play if only to see Brooke Adams as Winnie brush her teeth thoroughly, missing no underneath places and including the tongue …. “as if it matters” is the operative thought.

Pinning on her hat, filing her nails, she warms herself up with a free form chat about the past and comments on the present.  She’s glad to be alive – it’s a happy day!  And when, as the hot day advances, her positive view wears thin, she always finds something to declare a mercy.  Willie’s on the other side of the rock, reading the paper but, stuck as she is, she can’t see him.  Oh, if only he’d come over here to live a little while.  But at least he’s here, “it’s a mercy.”

Willie, barely seen and of few words, blows his nose formidably – with not much happening, it’s a real event.  An old man, he goes off on a kinky postcard.  He hands the postcard over to Winnie. “What are they doing?” she asks.  But she shrugs, accepts, makes excuses for him …. they’ve been together for a long time.

As Act II opens, Winnie’s now buried to her neck.  This is quite a shocking image.  The personal items — tooth brush, nail file, a gun — are near but out of reach because, after all, her hands are buried with the rest of her. “It’s a mercy” comes out almost strangled.  With all of Beckett’s wit and Winnie’s valiance, still, the drastic reduction of possibilities is looking beyond bearing.  Willie emerges from his side of the rock, gallant in a top had and tuxedo though with the limited movement of a six-month old child:  in a stunningly choreographed crippled dance of determination  — another reason in itself to see this production – he strains toward what’s lying around on the hill top, out of Winnie’s reach, that will save them both.  She dug in, he at a crawl, Winnie and Willie are near the point where gravity takes over.

Like the valiant Mr. and Mrs. Antrobus in Thornton Wilder’s The Skin Of Our Teeth, Winnie and Willie are real people with powerful allegorical presence.  Winnie and Willie are all human beings facing the intractable limitations of old age, though not all human beings share their triumph of love  That’s one “message” of the play – love can help.  Another is, act as if it matters.

Happy Days is romantic, funny, touching, and profound and this production, directed by Andrei Belgrader, with Brooke Adams and Tony Shalhoub is one for the ages.

Happy Days plays at the Flea Theater in Manhattan’s Tribeca district through July 18, 2015.  For more information and tickets, www.theflea.org 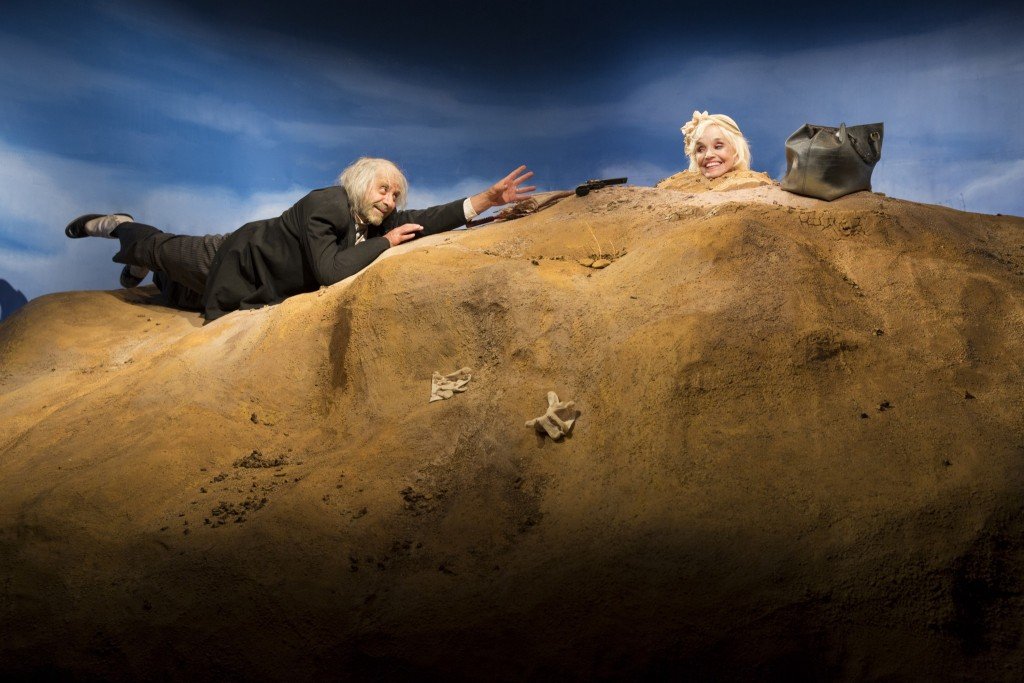 Awards | Lisa Ramirez Wins Award for Her Play To The Bone — Great News!

There are so many levels of implied discourse in this very wonderful and deeply disturbing play. One of which is the loss of purposes which come to too many with advanced aging – would brushing ones teeth make a Happy Day for a 20 year old? Or is not appreciated at that stage in the life cycle? A prototype for the last act, which may or may not have been in Becket’s experience when the play was written in 1960 when there were still thousands of paralyzed polio patients confined in iron lungs. These patients could not visualize their own… Read more »

Your point about the iron lung and Winnie — that really seems like a convincing link. I wonder if anybody else every thought of that. It seems to me like a real contribution.