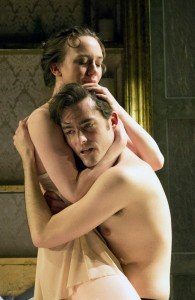 ‘Tis Pity She’s A Whore is a brilliant and uncompromising play about forbidden sexual love. Probably first performed between 1629 and 1633 and not often since, it’s often seemed too hot to handle — one can see why.  Taking  conflict in romantic love to the extreme, ‘Tis Pity studies through the unfolding of drama what happens if the lovers are subjected to an ultimate obstacle – incest.

Giovanni, an attractive young man in all ways, thoughtful, a reader, has recently returned home to Parma from the University in Bologna and is wildly in love with his sister, Annabella, who returns his passion.  Nude and ecstatic, they secretly consummate their forbidden love in a bed scene that recalls Romeo and Juliet’s night together after their surreptitious marriage – but while it’s society that keeps the lovers apart in Romeo and Juliet, in ‘Tis Pity She’s A Whore, it’s biology.  Somehow that seems like a kind of digging deeper.

Since the love affair is secret, attractive and well-to-do Annabella is besieged by other suitors.  One, Grimaldi is a pretentious soldier, and Bergetto is a none-too-bright fop – his scenes are hilarious, but he’s clearly not a true contender.  More in play is a wealthy nobleman, the intelligent and determined Soranzo who, though he appears eligible, has abandoned his previous lover, Hippolita. 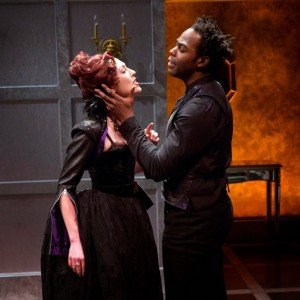 Hippolita, enraged by Soranzo’s deceit, and the death of her husband that she believes followed from it, plots to kill Soranzo in revenge.  Her husband, though, is alive and on the scene in disguise, is also looking for revenge against Soranzo and enlists Grimaldi to murder him.  Grimaldi, though, kills innocent Bergetto in error and the local sanctimonious Cardinal, reminding us of the hypocrisy English Protestants of the time attributed to the Catholic church, banishes Grimaldi to Rome in punishment. 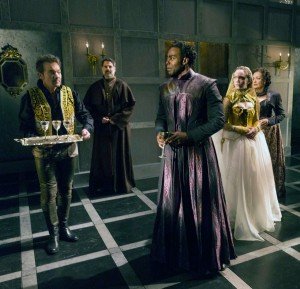 Annabella, by now pregnant by her brother and with two of her three suitors gone, in desperation marries the remaining suitor, Soranzo.  His love turns murderous when he discovers she’s pregnant by another man.   Extracting the name of her lover from Annabella’s tutoress (with dire consequences for the poor woman), he readies himself to kill Giovanni, but not before Giovanni has, well … Othello may come to mind.  But Ford doesn’t leave off with I kiss thee and I kill thee.  Some may find the brutality and gore that marks the ending sensationalism:  I thought it was expressive.

Matthew Amendt is outstanding as Giovanni, an intellectual young man totally overwhelmed by his passion – mostly Romeo but we see the Hamlet in him.  He’s inspiring as he speaks the powerfully lyrical poetry of love, and persuasive in rage, in all ways a vigorous, commanding stage presence.

Amelia Pedlow is a fine Annabella who transforms from girl to woman before our eyes, though it doesn’t do her any good.   Among the supporting characters in this superbly acted play, I enjoyed particularly the full characterization Ryan Garbayo brings to the role of Bergetto – foppish, but he really falls in love. Derek Smith is fascinating as Vasquez, Soranzo’s realistic and manipulative servant: he’d thought he’d seen everything – until the events of  ‘Tis Pity.   The same goes for the audience.

The black and white geometry of David M. Barber’s set is a stunning backdrop  for the emotional intensity – the vibrant color – of the play.  This set is a vivid parable of the raw war between intellect and passion of ‘Tis Pity.  The haunting music, jarring but appealing, is composed by Adam Wernick.

The many Shakespearian echoes are a gauge powerful awareness of Shakespeare’s plays in the world of theater fifteen or so years after his death but ‘Tis Pity She’s A Whore  is a deeply original work, a moving drama and a profound psychological exploration the isolating madness of romantic love. Without absolving Giovanni and Annabella, ‘Tis Pity She’s A Whore thrusts them into a world of shallow moralistic judgments that seem trivial and irrelevant in light of their profound emotional experience.

And what about that title?  To understand the point, you have to hear the great last lines.

But that’s fine — nobody could leave ‘Tis Pity She’s A Whore early!

‘Tis Pity She’s A Whore, a Red Bull Theater production, plays at the Duke On 42nd Street on Manhattan’s West Side through May 16th, 2015.

Seeing this play for the first time was an unforgettable theater experience. The title is well known but until you see and hear the play one does not appreciate the cynicism and hypocrisy which these lines convey. All the play’s wondrous words were all the more powerful as they were so well and clearly spoken by the excellent actors. This production is a must and will always be remembered.

I agree — I feel really LUCKY to have seen it! Yvonne