This is a light comedy about an English physician, Dr. John Floyer, and his wife who are in China in the early 18th century.  There really was a Dr. John Floyer at this time who, like Floyer in this play, was interested in measuring the rate of the pulse, although the real Dr. Floyer never went to China.  What he knew about Chinese medicine came through missionary reports.

In this period Europeans and Chinese knew very little about each other and The Subtle Body rests on comic confusions arising as Dr. Floyer and the Chinese physician, Dr. Zhang, try to understand each other’s medical practices through veils of prejudice and misinterpretation. European practices are seen as “barbarian.” Dr. Floyer and his wife Charlotte also habitually misunderstand each other as he, characterized as a prissy medical research nerd, talks about measurements and practicalities which she, hopefully, interprets as planning for sex. 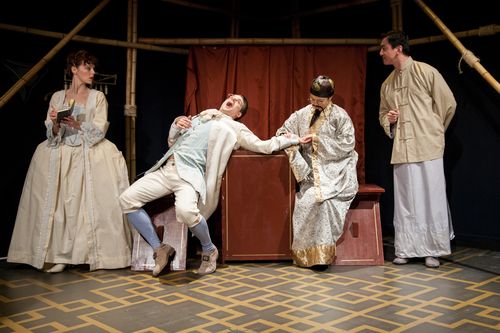 The comic situations are less than original, though a few moments are rescued by the physical antics and sharp timing of Michael Zlabinger who plays Dr. Foyer, Stephanie Wright Thompson as Charlotte, and Ya Han Chang in the role of Dr. Zhang. Things become a little more interesting near the end of the play as a new character emerges: Yang’s Chinese wife, subtly played by Ya Han Chang in a new guise, as she and Charlotte engage in an intriguing familial situation.

It troubles me that The Subtle Body is so unfair to the real Dr. Floyer , a great 17th-18th century physician who in the play is shown as an inept, unromantic, out of touch buffoon. This is an off-target characterization of a man whose observations and discoveries continue to benefit us all. We don’t expect works of art about real people from the past to be wholly and completely accurate — we grant authors broad poetic license. But this play has so little to do with Dr. John Floyer that you wonder why the author bothered to bring him in at all … unless it’s because dead white males are fair game — especially dead white European males.

In teaching the world the use of a watch to measure the pulse (two volumes, over 1000 pages), Dr. Foyer pioneered the application of accurate measurement to clinical medicine — an achievement reduced to a mention on a translation board at the very end of the play. He also provided the first detailed description of emphysema, and wrote the first book on geriatric medicine but don’t look for anything admirable about Foyer in the play … he’s invariably the butt of a joke. How misleading!

The Subtle Body plays at 59E59 Theaters in midtown Manhattan (yes, that’s the address) through March 1, 2015.

What an interesting idea — to relate the early Chinese doctor in the play to recent beliefs about the great abilities of the “barefoot doctors.” Thank you1

I also found this play truly misinformative about one of the most significant physicians. The characterization of Chinese medicine is also equally distorted. For Dr. Zang to make the astounding diagnoses is totally wrong. Is the author perhaps still believing in the efficacy of the “Barefoot Doctors”? Although the play was well acted, and some of the dialogue really good, I cannot recommend this work, for it is essentially a gross distortion of historical reality.