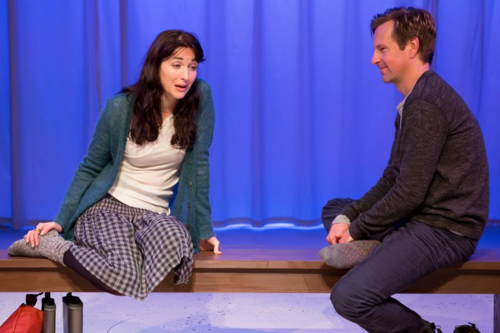 Their flirtation rumbles along through conversation, punctuated by a couple of dramatic incidents, one involving Jesse’s child and another a big hurricane, dramatized with multi-colored lighting effects.  There are two possible endings but a lack of suspense.

Nina’s articulateness and answer-for-everything personality is well conveyed by Danielle Slavick — her responses and emphases in gestures are sharp and fun to watch for awhile though by the end of the play they seemed repetitive.  There’s no chemistry felt between her and Stephen Barker Turner  in the role of Jesse, though, and in any case it’s hard to know what she sees in him.

The play seems to “hope” in a sense that people will respond to it through recognition of current situations and buzz words — ecological problems, stay-at-home-dads (and alleged lowered testosterone levels, Science Times sorts of things), women who make more money than men,  pollution of seafood, vegans, inter-religious relationships, meditation. The romance  seems no more than a synthetic framework for voicing these familiar  contemporary issues.

I See You plays at The Flea Theater in Manhattan’s Tribeca district through December 21, 2014.

Broadway Review | You Can’t Take It With You by Moss Hart and George S. Kaufman | With James Earl Jones and Rose Byrne | Directed by Scott Ellis | Longacre Theatre

This play was a mild polemic of the anxieties and tribulations of today’s society but not really a drama. The characters were thin although Danielle Slavick did a splendid job with her material – she was almost a femme fatale.