… not your Little House On The Prairie … 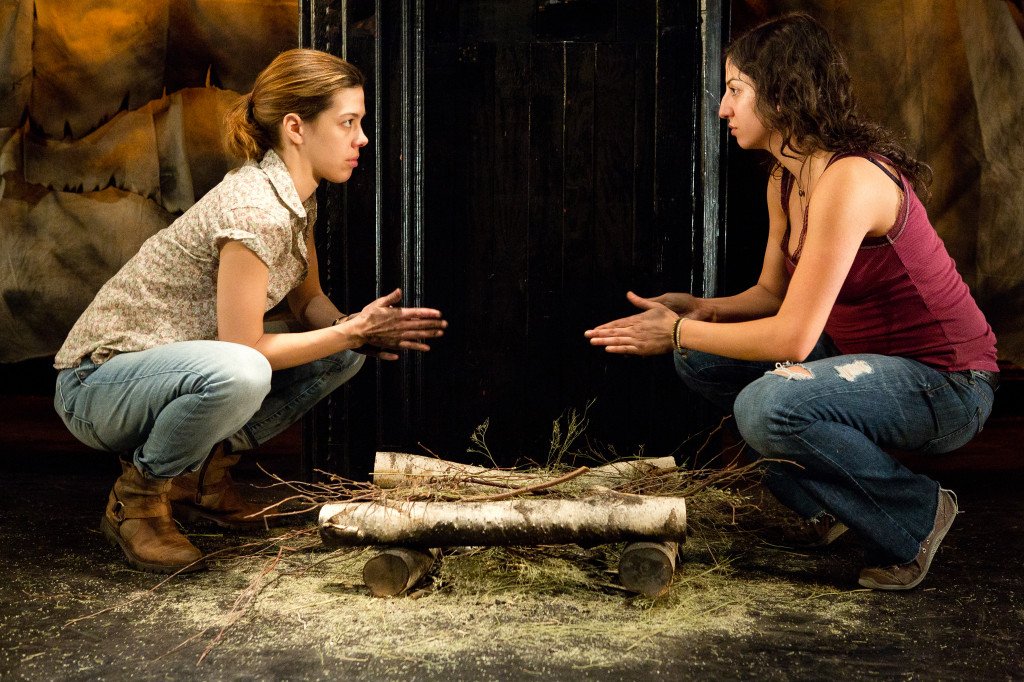 Two sisters, Sarah (Folk-Sullivan), a morbidly passive introvert, and Hannah (Khoshnoudi), more outgoing and looking for a leap to freedom, are played by two fine actresses who subtly and vividly capture their psychological contrasts through complementary monologs and some physical action.   I’d like to see them in a more satisfying play.

In intriguing staging, which works well because of the dramatic strength Katherine Folk-Sullivan brings to her voice, Sarah in her first monolog is seen as a backlit shadow flickeringly behind a curtain.  She’s trapped in her rural Colorado home, edgy, seething with resentment, stuck doing chores with no help from her mother.  Hannah, we find, is more in the world — she has a job in town — and is more determined to get away.  The sisters share, though, a keen dislike of their mother’s pet, a sheep named Vicky that the mother insists on keeping in the house, the remaining one of 30 or 40 sheep the family had when Dad was there and the family prospered.

Vicky the sheep, though not actually enacted — nobody plays Vicky — through pantomime and description is part of the action, but the mother is less visualized.

To which sister will the mother give ownership of the fine truck that Dad — dead or just absent — left behind years ago?  Each wants to get her hands on those keys to freedom, but assertive Hannah hatches a scheme to take hold of them for herself, a plan that involves impregnating Vicky, an event grossly and unpleasantly described (signs of things to come).  It brings to mind that Barbara Kingsolver in her novel Prodigal Summer makes the undeniably earthy task of impregnating goats hilarious and touching.  It depends on temperament, I guess.

The mother’s birthday catalyzes the violent eruption of repressed resentments and sibling competition, including the sisters’ hostility to that third cog in the machine of sibling rivalry, their mother’s favorite, Vicky the sheep.  And what happens isn’t pretty.

Will Hannah, who has the keys to the truck, get away?

And how, in current narratives of dysfunctional families — one thinks of Tracy Letts’ August:  Osage County, play and film — did the big open spaces of the American West, symbol of freedom, take on the character of a trap?

My Daughter Keeps Our Hammer, sharing this theme of “let me out of here,” calls to mind as well the new play by Eric Dufault, The Year Of The Rooster, (my previous review) also focused on a dysfunctional family in a claustrophobic house, in the Oklahoma plains, with a lazy, narcissistic mother, an inhibited son in need of a break-out and, of all coincidences, an animal inappropriately kept indoors who does not fare well, a heroic fighting cock (here it’s the mother who finds the animal a major irritant).  In The Year Of The Rooster, we understand the debilitating conflicts and tensions and share the son’s struggle to transcend them.

In My Daughter Keeps Our Hammer, reasons are as opaque as the title (there’s no hammer, just a meat tenderizer — does that count?).  We don’t know why the mother exploits her daughters, or what happened to the father, and the playwright’s talent for description is in the service of unsavory sadistic sensationalism.

My Daughter Keeps Our Hammer plays at the Flea Theater in Manhattan’s Tribeca through . Extended through February 22, 2014.s.

I, too, saw this play and feel that as a reviewer you are too kind. I found that the sadism expressed towards the end of this play was not necessary and certainly did not add to this as theater. I wonder if somebody at the Flea has a somewhat sadistic bent — as experienced in another play some time ago entitled Job.