“My ancestors fought the Indians along the Mohawk River before they signed up with George Washington,” says Russell, father of the family. “Your mother’s great great grandfather helped plan and design the Erie Canal.” This is an amusing, beautifully observed and perfectly acted play about an upper class “WASP” family — Gurney’s favorite territory — on the cusp of social change in the aftermath of World War II.  It’s set in 1954 at a summer lake house near Buffalo, NY.

To cut to the quick, there are moments when Peter Scolari as Russell — Yale, money, connections, family — is so imperturbable based on his sense of certainty about his family’s entitlement and at the same time so natural and vulnerable to the challenging immediacies, so totally believable, that I’d like to go back just to see him do it again. 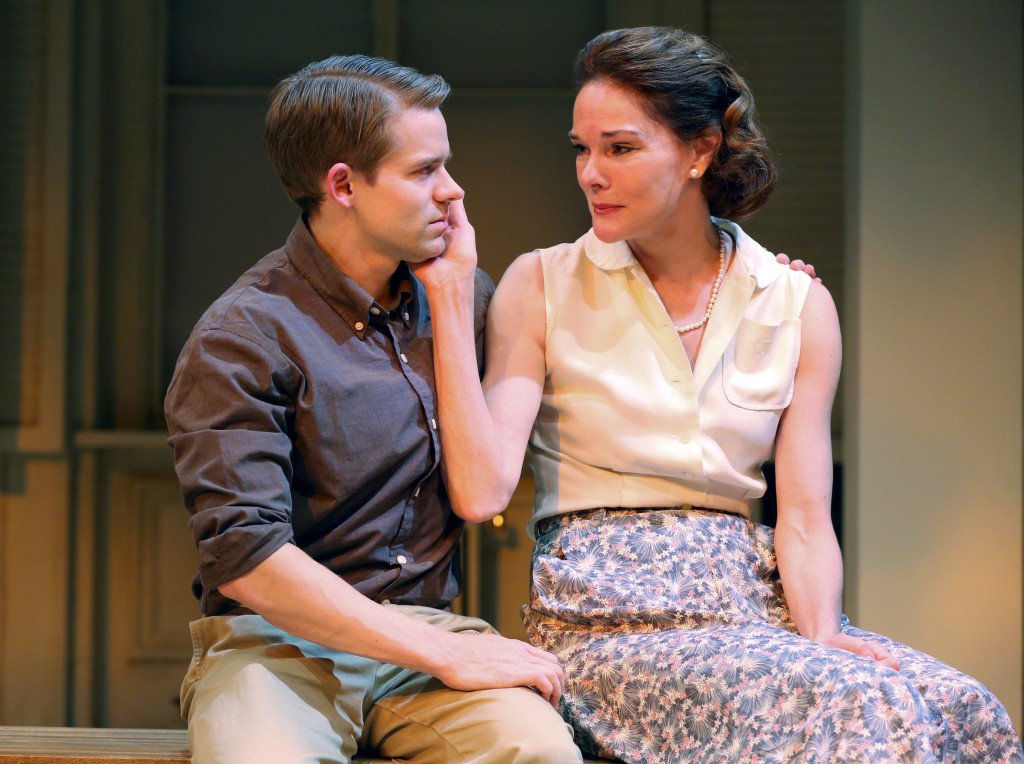 Carolyn McCormick is equally tone perfect as Russell’s entrancing wife, Claire, a woman born to do all the right things and doing most of them right — raising her two, now college aged, kids with focus and intelligence, bringing home everyone’s favorite goodies in big paper bags like the mother of the Bobbsey twins, heading up what must be every charity in Buffalo, but with her own vulnerability and underlying, passion, harnessed — though not eliminated — by “good breeding.”

The challenges that threaten the smooth skein of Russell’s privileged view of himself and family come thick and fast:  his son, Nick (Andrew Keenan-Bolgar), is in love  with a Jewish girl Betsy, (Molly Nordin) and his daughter Peggy (Ismenia Mendes) is in love with an Italian.  Oh those kids!  And, although she’s sticking to their own cast and class, his wife may be having an affair: Mr. Baldwin is, like Claire, a tennis player.  Russell’s sport is sailing.

A scene where Russell, on a small sailboat with his daughter, persuades her — as they repeatedly tack and and duck under a swinging boom — to take a vacation from the Italian Marco by offering her a trip abroad (to Italy!) is so good the audience applauded spontaneously in mid-act.

Fitting the “WASP” stereotype to a T, Russell often sounds arrogant and narrow minded.  He’s fast to cast aspersions on other ethnic groups, warning his daughter about her beloved Marco, for instance, by telling her that all Italians “become gangsters or politicians.”  But faced with the reality of his daughter’s deep emotions, and his understanding of true character, he turns tack.  After all, he did once have a Jewish girlfriend, though they never thought seriously of marrying (“I had my English roots to keep me in line, while she fell back on the Old Testament.”)  And Claire sees a virtue in “hybrid vigor” all along.  This is a very benign, Norman Rockwellian vision of social entrenchment. 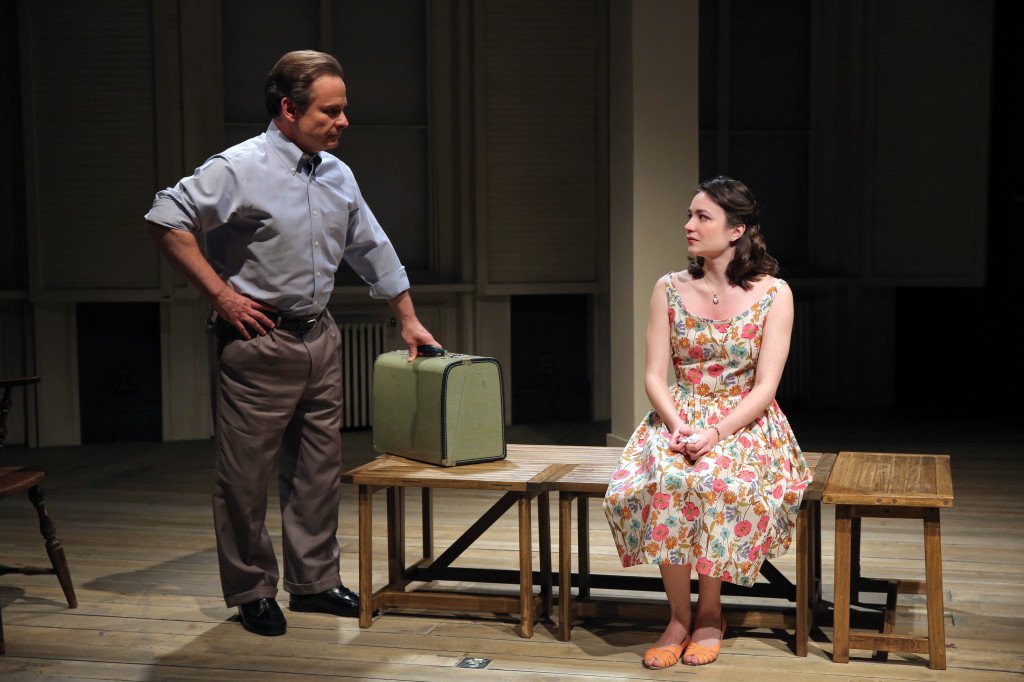 They’re forced to change, and they were never really that prejudiced anyhow — just enough for Gurney’s wit to offer one delicious laugh after another.

Popular songs create not only a nostalgic aura, as in Woody Allen, but are part of the interplay between surface and depth that’s at the heart of this play.  In a particularly moving moment, a brilliant moment, really, Russell moves to accompany his wife to the kitchen but she, thinking of someone else, lightly holds him off.  “Someone’s in the kitchen with Dinah …. “ he sings softly.  Betsy, the Jewish girlfriend’s not the only one into “hidden meanings” — so’s Gurney.  A message of this play is that “People can know and not know,” and at the very least, that’s something we can work with. 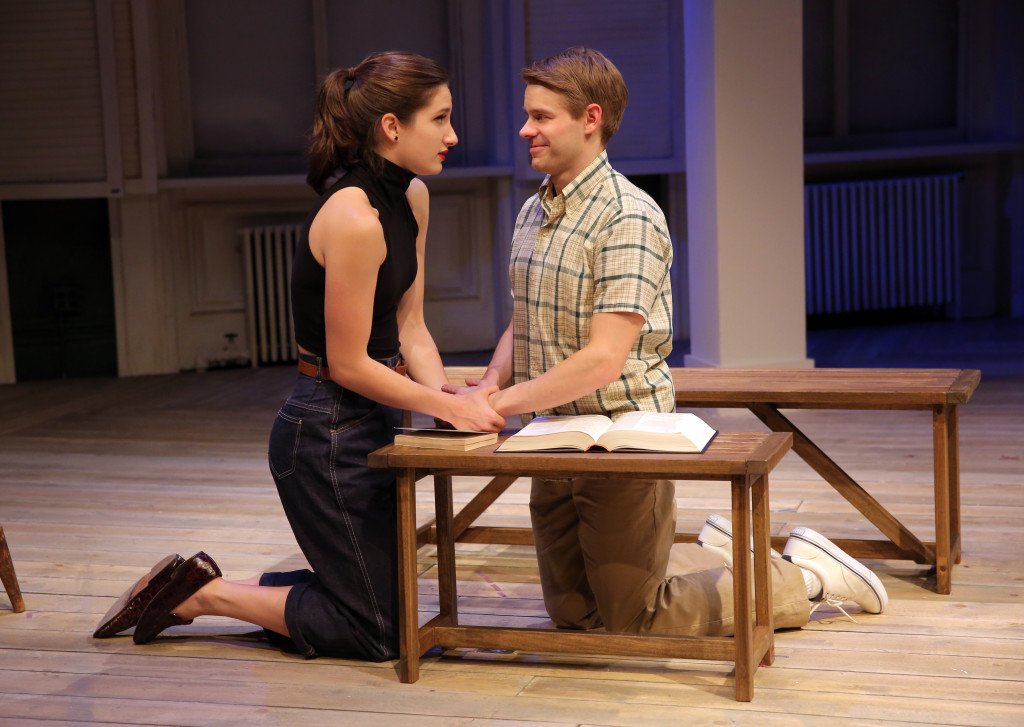 There are some implausibilities in Family Furniture, particularly in the denouement.  These are easily overlooked because the characters of this beautifully cast play and the repartee, and the nostalgic, seductive  sense of a moment of American wholeness provide an evening of total delight.

Family Furniture plays at The Flea Theater in Manhattan’s Tribeca through December 22, 2013.

Review | The Republic, Or, My Dinner With Socrates | Adapted and Directed by Viot Hořejš | Czechoslovak – American Marionette Theatre | LaMaMa in Association with Goh Productions

What a wonderful review – I too really enjoyed this, and the way in which the characters were built as very real human beings not stereotypes. One of the items that I enjoyed was the mention of the sailing boat class call the Snipe – I had raced these at one time in my life. I heartily recommend this play to all – but I wonder if the twenty something or thirty something theatergoer will really enjoy as those of us who are somewhere past 40? Thank you Flea Theater and Gerney for one of the most delightful evenings consider… Read more »