Set in ancient Rome as its appealing title suggests (that title being one of the best things it has going for it)  A Funny Thing Happened On The Way To The Forum is a zany comedy with music.  A slave, Pseudolus, makes the deal to acquire for his master, Hero, the beautiful Philia, in return for which Hero will set him free.  Philia is held in the house of the pimp, Marcus Lycus, who purchased her on behalf of the Great General, Miles Gloriosus whose arrival is imminent.   With Hero’s parents out of town, Pseudolus sets to work keeping Philia away from Miles Gloriosus and nabbing her for Hero, the slave’s on-the-spot inventiveness conjuring various ruses involving potions, hideouts and disguises leading to humorous false hopes and a romp of mistaken identities.

This show is so wacky and so silly and so camp that its success depends on a great comic star in the central role of Pseudolus.  The three performers who have played Pseudolus on Broadway, Zero Mostel, Phil Silvers and Nathan Lane all won Tony’s for Best Actor in a Musical  — no accident, because that’s the level of performance it takes. Bay Street’s production doesn’t quite get that level of magnetism and force from the center from Peter Scolari as Pseudolus, and so much of the time the play veers toward just silly.

It doesn’t help that the songs are bland — Stephen Sondheim’s first Broadway show — and the rampant, coarse sexism gives the show a dated feeling that the “it’s all in good fun” spirit doesn’t erase.

Still, there are some good laughs, funny site gags, clever word play and, among steady competence, a couple of outstanding performances that keep you watching and hoping which is a good thing because the second act is a lot more fun than the first.  This production also benefits from a wonderful, colorful, tone perfect set of three houses on a Roman street by Michael Schweikardt, and several talented performers, including Scolari who, if not inspired, has good comic timing, energy and agility.

Nathaniel Hackmann is perfect in the role of Miles Gloriosus, the physically impressive, tough guy Roman general.  Broad-stanced and pompous, he opens up his stunning operatic voice, exciting to hear, in the song “Bring Me My Bride.”  He’s an excellent comic actor, too, and his recoveries from the play’s mix and match befuddlements are great fun.  Hackmann is the only performer, as far as I could see, who isn’t wired with a microphone — what a relief — it’s a pleasure to hear a natural voice after scenes of miked singing, dialogue, and much screaming (I guess that last is intended as “antic comic energy” but there sure is a lot of it).

Jackie Hoffman is equally irresistible as the loud-mouthed and over-bearing Domina, Hero’s mother and wife to Senex who can’t stand her, well played by Conrad John Schuck.  What comic flexibility in her face — mask-like and expressive at the same time!  Think Carol Burnett — Jackie Hoffman is as good or better!  One of the more effective interludes in the play is when this shrewish woman nobody likes is briefly overcome with tenderness toward her husband — which she quickly vanquishes in her song “That Dirty Old Man.” 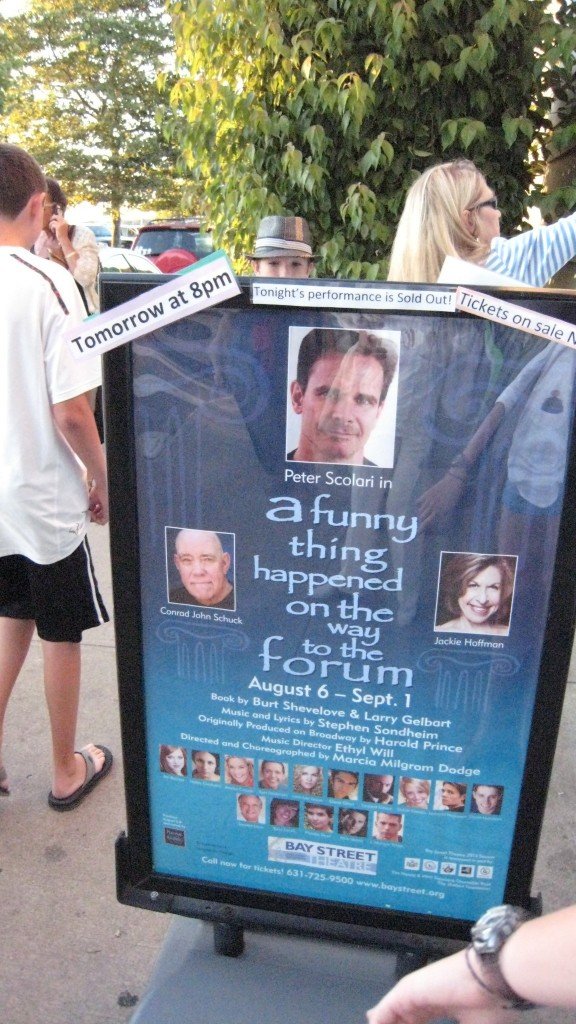 Tom Deckman brings a lot of comic variety to his role of Hysterium, the over-anxious slave in the Senex family and a good foil to the manipulative Pseudolus.  Among the lightly clad girls girls girls who dwell in the house of Marcus Lycus and parade periodically around the stage with uninhibited gyrations, Gymnasia, played by Terry Lavell is for statuesque height and gender ambiguity — well, nobody in the audience could take eyes off Gymnasia.

A Funny Thing Happened On The Way To The Forum  plays at the beautiful Bay Street Theatre on the Wharf in Sag Harbor, Long Island, through September 1, 2013.

… “toned down burlesque” — that REALLY hits the nail on the head!
THANKS!

I agree with you – for me the first act dragged on, although there were some good parts to it, but the second act really made the whole evening worthwhile. The three men who played the three soldiers/eunuchs were simply wonderful – both their acrobatics and their total body language added to the evening. Gymnasia was the very high point of the evening! I think most people will find this on the whole a modestly enjoyable entertainment – a somewhat toned down burlesque.