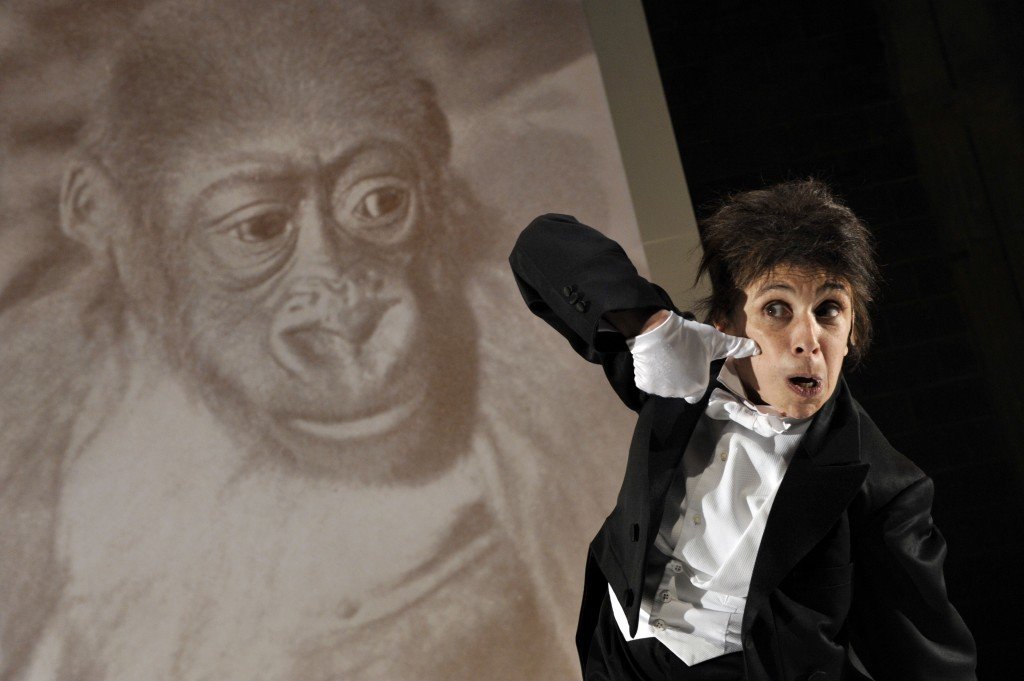 Kafka’s Monkey is original, creative and one of the great theater experiences.  It brings together a great author, a talented playwright, and a brilliant actor so, after the fact, one might say “how could it be otherwise.”  Still it’s totally unexpected.   After all, a play consisting of an invited speech delivered by an African chimpanzee to an august Academy is … well, unlooked for.

A captured chimpanzee, to make the best of the violent situation which robbed him of his freedom, has through diligent observation and imitation adopted the skills, manners and characteristics of a human being.  He’s here tonight, five years since his capture and arrival in England, to present an invited address to a lofty, probably scientific, Academy audience — and yes, we are that audience.  His know-how and referential world are completely human, his British English perfect.   Under his white tie and tails, though, and in his movements, we can see that his bodily transformation to human is less complete:  he has a chimpanzee’s long arms, broad chest, and swinging gate.   His name is Red Peter — and therein hangs a tale.

Kathryn Hunter’s portrayal of two natures in a single being, and her delivery of his speech in which he narrates the details of his capture, his gruesome shipboard journey, and his brilliant “humanizing” adaptation is among the most memorable performances in theater.  A petite woman acts the role of a chimpanzee who’s acting the role of man.  Think about that.  She creates the character and his world.  In calm, discursive moments, Red Peter is most thoroughly the man — his right palm pressed to the small of his back in an elegant, upper class gesture.   But when the emotion of his narrative builds, his chimpanzee physicality presses forward as he takes positions that are contorted for a human, natural for a chimp, or — with a ladder prop — leaps across branches and hangs precipitously among the trees.

Hunter makes her dancer’s strength and flexibility into the very essence of a chimp.  She conveys a Chaplinesque poignancy in conveying the life events and psychic travels of the dislocated, ingenious primate, thrust from Eden.  As the adaptor Colin Teevan notes in the program, “… using his own brutal experience of the ‘world of me’ as a mirror, he deftly inverts the situation to make his speech a reflection upon humanity.”  Humans come out pretty loathsome but the earth is stuck with them.  We’re stuck with ourselves.

Like Metamorphosis and others of Kafka’s animal stories, A Report to an Academy, has received as many interpretations as there are interpreters.  Just as the chimp survives by using intelligence and self-discipline to adapt to the more powerful humans at a sacrifice of aspects of his true self,  so humans have survived in the face of all-powerful nature by using intelligence and self-discipline at the expense of their natural instincts;  and, colonial peoples have survived in relation to their colonial masters in parallel ways; and Jews (since Kafka was Jewish) have survived and adapted similarly in the context of a dominant Christian culture, and so on.

The many interpretations are most all “right” and able to co-exist, because the story is a parable of power relationships.  Its resonant layers of meaning, its philosophical, political and psychic range, and its strength of characterization, beautifully transmitted by the Colin Treevan, underlie this compelling theater experience.

This is for sure:  during the narrative, the large audience was silent and intensely focused — except for moments of laughter, and actor-audience interaction.  With all its seriousness, Kafka’s Monkey is a comedy, or much like a comedy, and true to comedies, it ends in marriage — of a most surprising,  and inevitable, kind.

This is the New York premier of the London production by the Young Vic.  It’s a privilege to see Kafka’s Monkey and it’s here for a short run so I’d say — get to it!

Kafka’s Monkey plays at the Baryshnikov Arts Center on West 37th Street in Manhattan through April 17.

Hi, I would like to read the script of this version 🙂

I reviewed it awhile back, in 2023 — I don’t know the subsequent history of this show.

I’m glad you brought out some of the ideas of the play. I have the impression that people (and some reviewers) are so astonished and excited by her performance, and that incredible transformation — and rightfully so, it’s wonderful — that they get distracted from thinking about the many vast issues and ideas the play takes up. All in all a truly remarkable theater experience. Thanks for writing!

Thank you for this incisive review of one of the most memorable and important theater experiences anyone can have. Kathryn Hunter’s transformation into the chimpanzee being a human being is one of the most remarkable and profound stage performances I can remember. The greatness of Ms. Hunter’s acting/dancing does not diminish the very powerful questions raised. What is civilization? Who really are we? Do we really adapt? The only fault I can find with his production is that it will only be available to New York audiences for a limited amount of time. That’s a pity for it is really… Read more »