Review | The Vandal by Hamish Linklater | Directed by Jim Simpson | Flea Theater (returning March 22-31, another chance to see it!)

ak bleak bleak — a bold way to start a play, but it works wonderfully.  Strangers, a woman and a boy, on a cold, road at night, next to a cemetery, waiting for a bus, but the vivid characters bring it to warm, pulsating life — which is exactly the point. 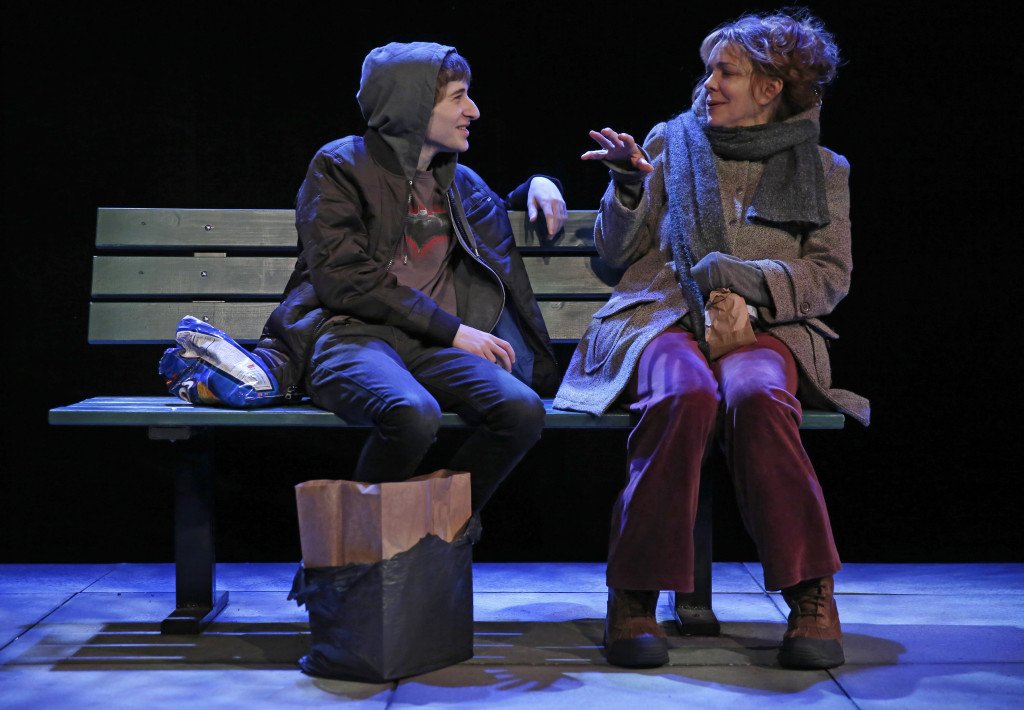 Noah Robbins as the boy and Deirdre O’Connell as the Woman. Photo Joan Marcus

Through snow dusted tombstones, a path runs in diminishing perspective to the distance: read infinity.  The bus is late.  The woman sinks into herself, her coat hanging crooked, too thin for this cold night.  Things couldn’t be worse.  She has some ominous connection with the nearby hospital.  She’s unresponsive to the fast-talking teen-ager who works to engage her with everything from philosophical riffs to brash seduction.

When, grudgingly, she takes his $20 bill to buy him (he’s under age) beer and Doritos we meet the third person in the play, the convenience store owner who turns out to be the boy’s father though, oddly, he hasn’t seen his son in a long time.

There are two exceptionally fine scenes in this show.  One, is the boy’s monologue born from musing on the orange Dorito powder that sticks to one’s fingers and that takes off, zooming like a comet from far to near and back again, from microcosm to macrocosm, inside to outside, being and nothingness — it’s a virtuoso piece in writing and delivery, so fast and canny I’d like to hear it again.

The other is the scene between the man and the woman in the convenience store, replete with the familiar and the uncanny, a merchant’s know-how in the face of stolen credit cards and the human connections that can override things done by the rules. 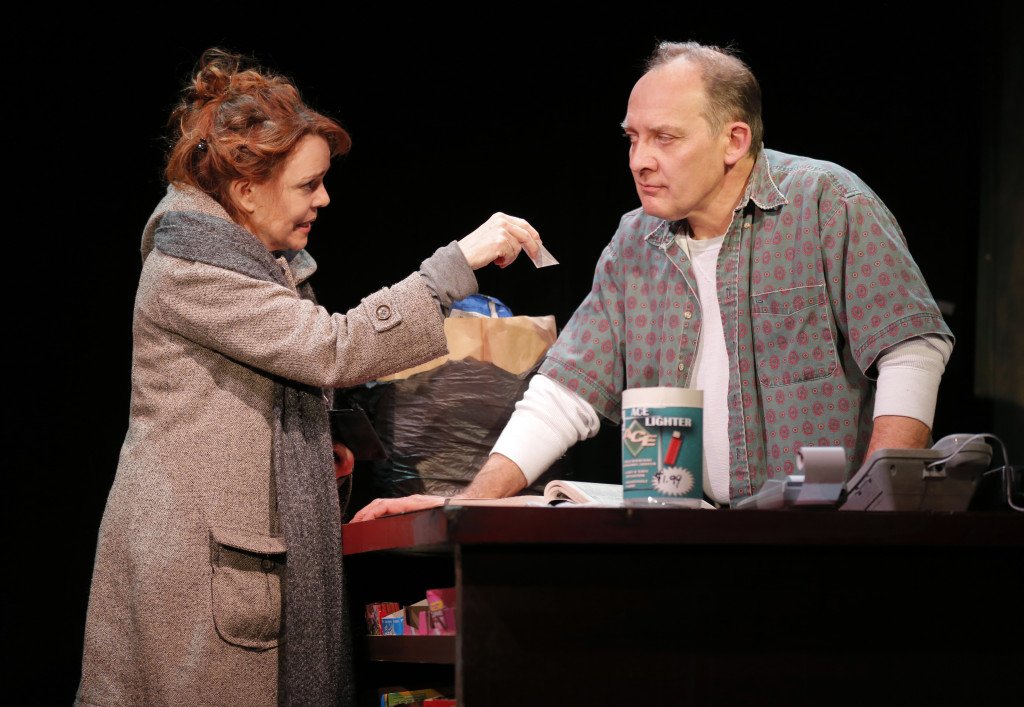 Deirdre O’Connell as the Woman and Zach Grenier as the Man. Photo Joan Marcus

We’re in good hands with this convenience store owner.  One enjoys the
strong capability and masculinity, combined with burred-over vulnerability Zach Grenier brings to the role, though Grenier’s a touch too cosmopolitan for this rural corner of upstate New York.  Deirdre O’Connell is touching as the woman who’s been through so much she’s almost — but not completely — drained.  The unhesitating speed with which Noah Robbins pours out the boy’s cosmic fast talk makes you feel he knows everything, which, through his strange circumstance, he almost does.

The outcome of this short play, involving the man and the woman, is pat and, when one comes right down to it, although the boy is the most interesting and surprising character, what happens doesn’t depend on him.  I felt that this loose cannon of a character was compensating for the fact that what actually happens in the play is not unusual or striking.  Yet, there’s a governing intelligence throughout that, though the play has some of the thinness of a practice one-acter, gives it a serious resonance.  The intelligence of the language, the overall dramatic aura, those wonderful scenes, and the fine acting are compelling.  The evocative set by David M. Barber fulfills the contrasts of realism and fantasy, intimate and cosmic, around which the play winds.

What will this young playwright do next?  Having seen The Vandal  — and having loved Linklater’s spectacular performance in David Ives’ School for Lies at Classic Repertory Theatre — I’ll be on the lookout for his next play, whether he writes it or acts in it!

I see what you mean about Beckett. Interesting …
Thanks! Yvonne

As I watched this play and listened carefully to the excellent monologues and dialogues I was strongly reminded of Beckett. This playwright was not only refreshing, but also may have the talent to create works which will be on the same level of intensity as those of Beckett.

Your observations are very perceptive and touch upon many of the aspects of this very interesting one-act play. What I found so very satisfying were the various dialogs and monologues of the players. One of the most exceptional, amongst many, is the scene between the woman and the store owner when the woman metamorphosis from a withdrawn almost semi catatonic state into a highly explosive verbal description of three agonizing years of the death of her husband. The playwright has a wonderful command of language and the actors really fulfill his promise. I too am looking forward to major works… Read more »