Heresy is topical, very funny, and totally enjoyable modern parable filled with references to today’s politics and based, roughly, on the life of Christ.  Some of the characters have Biblical names, like Mary for the mother of Chris, her idealistic, purist son currently in jail.  But Gurney’s a wonderfully surprising playwright so you can’t guess from that what to expect. 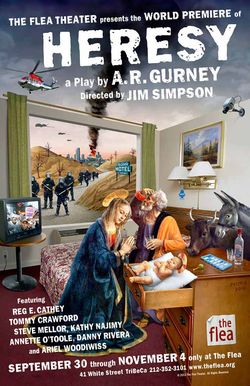 We’re in the office of Pontius, a government VIP whose preferred term of address is The Decider.  Mary and her husband Joseph, old time friends of Pontius from the roaring sixties (they call him Ponti, a nickname he feels is now beyond his dignity) are trying to get their now powerful friend to get their dreamy, off-beat son out of jail.  All the shenanigans are taken down on the computer by Mark (Tommy Crawford), an orderly intern (meaning : [1] he gives orders and [2] isn’t paid).  Matthew, Luke and John are nowhere in sight. 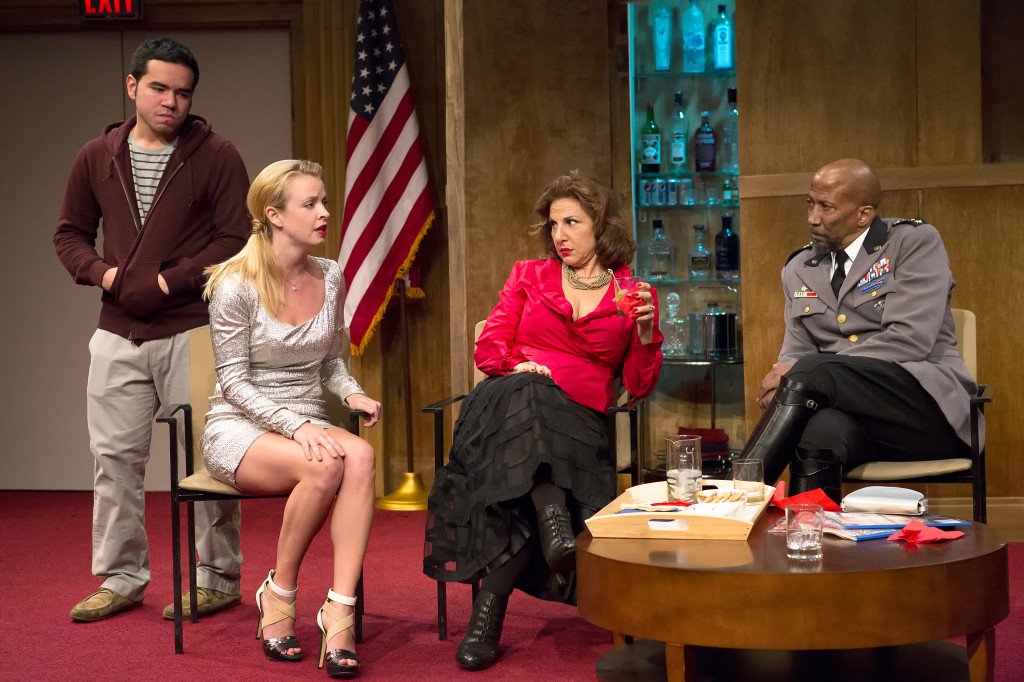 There’s a Kafkaesque search to find out just where in the vast and enhanced National Security bureaucracy Chris is being held.

Eventually he’s located and with the help of a gorgeous Venus named Lena (short for Magdalena) is rescued and — although we never set eyes on him — we can assume he’ll be OK for the short term: when it comes to ultimates, Gurney leaves things pretty open-ended. 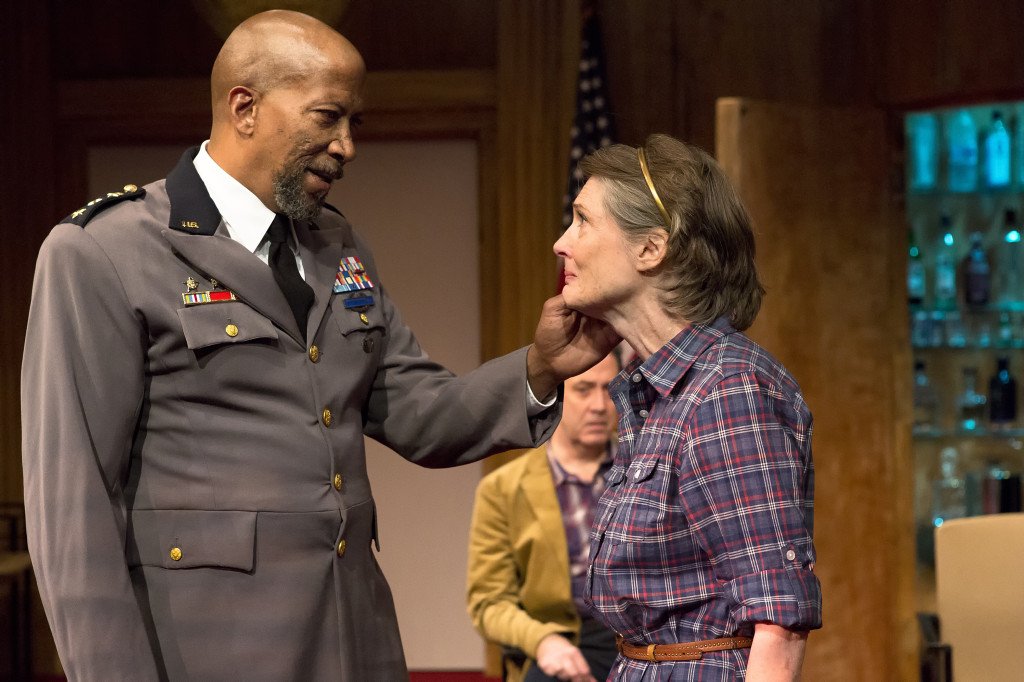 All the actors, briskly paced by director Simpson, draw great satisfying laughs from Gurneys witty lines and ridiculous situations — played seriously as they have to be to be funny.  I particularly loved Kathy Najimy as The Decider’s dotty but not stupid wife — an enthused fulfiller of the great patriotic mandate to shop.  The expressions that cross her face reflect her thoughts with the accuracy and breadth of the great comic actors and she has the voice to go with it.  The most originally observed character is Mary, whom Annette O’Toole brings to vivid life as a skinny, intense remnant of  60’s  idealism (we see where her son gets it), ready to jaw with anybody.  Ariel Woodiwiss as Lena is seductive and cannily able to grasp what really matters to her man.  Reg E. Cathey as Pontius ponders with great authority as the not-so-decisive Decider.

There are a lot of laughs, yes.  But in one sequence the characters, speaking out of their individual viewpoints and personalities, tell what each of them would do for the sensitive, volatile Chris when he’s freed from prison, each having a different idea.  Gurney turns this, on the dime, into an inspiring moment — as in, seriously inspiring.  How he does it — I’d best leave it to you to find out when you see the show.  I was deeply moved. 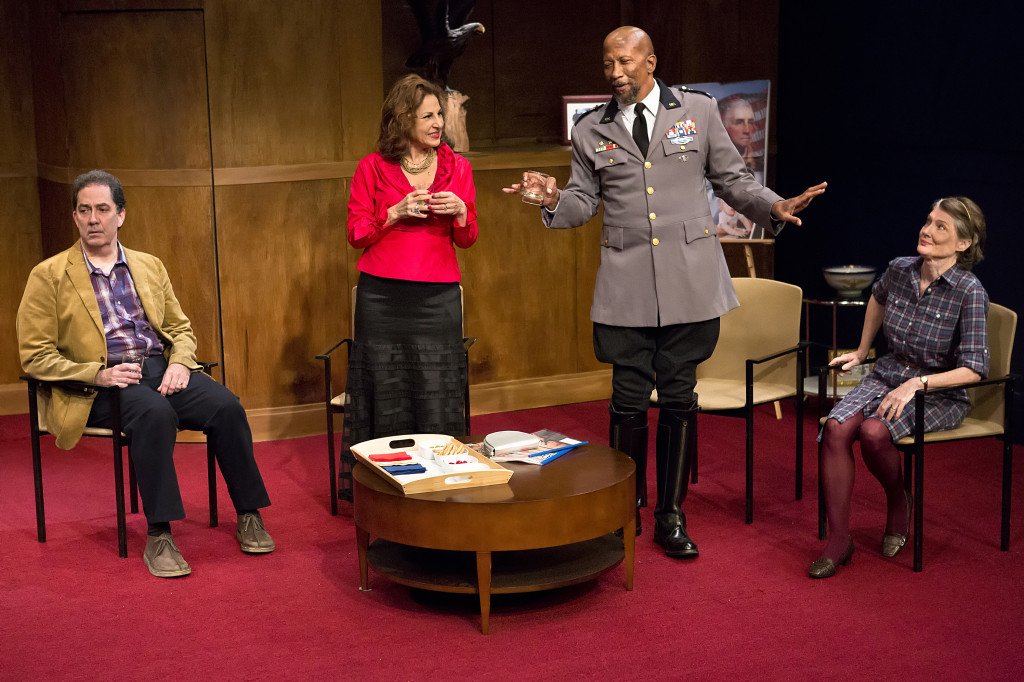 Pontius wears a truly scary pair of black, knee-high boots.  Mary’s plaid drab button-down-the-front dress worn with purpley-fuschia tights characterizes not only the role but the 60’s epoch (Super-Earnest-Skip-The-Tie-Dye Type):  in motion, this is a geniusy costume worn by a terrific actress.  Phyllis’ claret red gown (it’s a little different from the photos) is absolutely Phyllis.

Heresy is a very refreshing play!

Heresy plays at the Flea Theater in NYC’s Tribeca through November 4th.

Glad you enjoyed it — I sure did, too. Thanks for writing. Yvonne

How delightful to see a play which is topical, has meaning, is not afraid to mock the establishment and is written in such a wonderful manner. The players are also superb – each one fits their part, and makes the whole evening come alive. This is one of the most enjoyable evenings and memorable evenings that I have had in theater some time. It is refreshing to see that there are some voices out there that are willing to look at our present rainment – the Emperor’s new cloths!