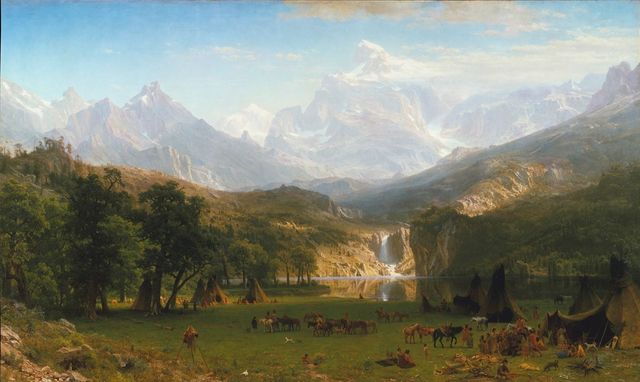 The MMA’s New American Wing is a feast of paintings.  There are so many, and they are so fine and varied, and worth seeing for different reasons.  The overall effect is to give a sense of the strength of the American painting tradition, placing it on a par with the European traditions.  That’s clearly what the designers of the new wing intended, and they succeeded.  And why, evidently, the galleries are “a contemporary interpretation of 19th-century Beaux-Arts galleries,” according to a Museum description.  The general sense is familiar great.  It engenders a sense of pride in the accomplishments of American painting in the circumscribed period the Wing covers, from the 18th Century to 1920.

In light of all the innovation current in museums throughout the world, the fundamentally conventional character of the New American Wing is surprising and even disappointing.  The designers went against the stream in this.  At the same time, though, while wondering, “wasn’t there another way to do it?”, I was delighted at their accomplishment in solving a difficult problem — weaving together chronological organization with thematically focused galleries.  The decision in exhibitions to go with “chronology” or “thematic” often seems either-or (and can be bitterly fought over).  Here the designers effectively integrate the two, and it works. 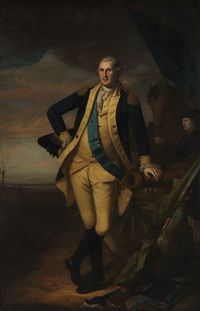 It’s wonderful to see favorite people of the past — and for me that’s George Washington — seeming as if alive as in this painting by Charles Willson Peale (apologies — the painting is much brighter than the photo. Naturally portraits are almost always designed to magnify whomever’s portrayed.  Charles Willson Peale’s low point of view in this very large 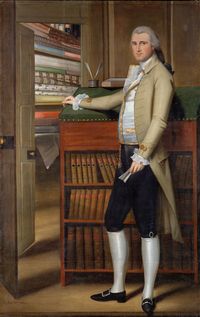 portrait (all dimensions given in captions below) makes this tall man seem exceedingly tall, exceedingly solid, and his individuality of great importance.  How grand, and how expressive of the democratic spirit of the new republic, that the fabric seller,  Elijah Boardman, painted near in time by Ralph Earl on a canvas of approximately equal size conveys a comparable magnitude and substance.  Boardman is advertising his fabrics — some, in this moment of warm feeling between France and the United States, look quite French.

The great icon of American patriotism, the huge painting by Emanuel Leutz of Washington Crossing the Delaware of 1851, has come out of the shadows of a long, dim wall and is now the centerpiece of a double-sized and well lit gallery, and a spectacular gilded frame has been constructed for it based on vintage photographs. 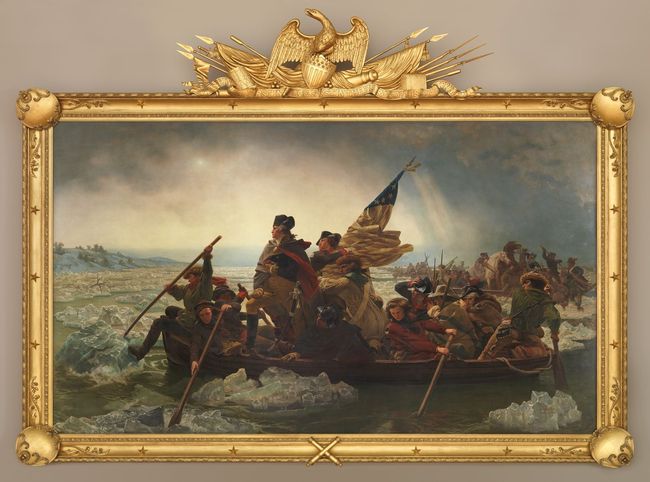 The painting commemorates a key event in the American Revolution:  December 26, 1776, in harsh weather, Washington and his men crossed the Delaware River, surprising and capturing approximately 1,000 Hessians based at Trenton, N. J. who’d let down their guard following Christmas revels.  This victory, following upon darker days, raised Revolutionary morale and stirred a new belief in the possibility of the American cause, encouraging the new recruits Washington needed for the army.

Leutz sacrificed historical accuracy in the service of the inspiring image.  The Stars and Stripes flag, for example, hadn’t been designed at the time of the crossing but by 1864 had become a stirring national symbol, while the original Grand Union Flag of 1776 by then would have been largely unfamiliar.

While the crossing took place in the dead of night, with rain, sleet and snow, Leutz gives James Monroe, right behind Washington, almost equal billing.  He carries the flag — literally and figuratively.  Like Washington, Monroe was a future President, and his Monroe Doctrine of 1823 asserted the national policy of no further intervention by European powers in the Americas, extending the principles of the American Revolution.

The boats are painted smaller and the river wider than they were, heightening the drama, and horses were not brought over in small boats.  Yet, the fight against great odds, the hazard of the event, the intelligence of the complex plan, the courage to carry it out, and the momentous meaning of the victory are the truths that Leutz conveyed.  It’s hard to want it any other way — or at least this image is so embedded in our national awareness, it’s hard to imagine it differently.

In the painting’s former, dimmer setting, I’d never noticed Washington’s watch fob, seen below his stomach, at the bend of his leg.  Watches were very valuable and symbols of status, and a watch fob is a favored male attribute, as in the portrait above of Isaiah Berlin, and is visible in several portraits of Washington (though not in the Peale above).  In place of the usual metallic chain, here Washington’s watch fob is represented by two round balls, where his leg bends out from his torso, below the belly (shadowed — check it out in the museum). This is so unusual, I wondered if these two rosy balls are intended to suggest “balls” in the anatomic sense, and characterizing — along with the stance, facial expression and weaponry — Washington’s masculine vigor.  And it may carry an even more specific symbolic purpose — as my companion suggested — to connote specifically Washington as Father of his Country.   I think so.

Washington Crossing the Delaware is flanked by two important works, of our great Hudson River School, equally monumental, and artistically surpassing Leutze’s painting, Frederick Church’s Heart of the Andes  and Albert Bierstadt’s Rocky Mountains (illus at top):  the historic sense of the gallery is heightened by the fact that these three paintings were displayed together, much as they are here, in the Metropolitan Sanitary Fair of 1864. 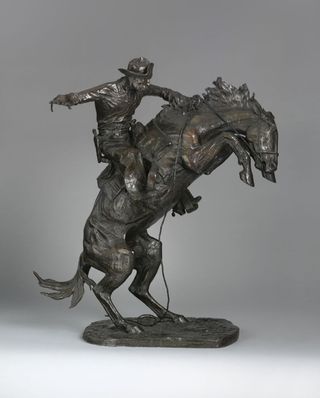 Entitling one of twenty-seven galleries “The West 1860-1920” marginalizes a good part of our country and highlights the Americans-doing-it-like-the-Europeans bias of the New American Wing.  On the other hand, it’s interesting, though not unusual, to see Frederic Remington’s Bronze sculpture Broncho Buster adjacent to Remington paintings like On the Southern Plains.  While focused on paintings, sculptures are interspersed, pertinently, among the galleries of the New American Wing, though sculptures are mainly on exhibit elsewhere in the museum.

In the fundamentally conventional organization of the New American Wing, Barbara Weinberg, curator of this section created a stimulating shake-up.  Thomas Eakins’ brooding portrait of his brother-in-law, The Thinker:  Portrait of Louis N. Kenton, is hung, unexpectedly, in the gallery of “Portraiture in the Grand Manner” among proud, patrician portraits such as Sargent’s Madame X (below R; click to compare Eakins and Sargent).  Eakins’ single standing figure, darkly dressed on the tall canvas coordinates with the “grand manner” portraits in form, but in spirit it’s entirely different.  It fits in, and it doesn’t.  The unexpected inclusion of Eakins’ portrait with the “grand manner” portraits stimulates new thoughts. 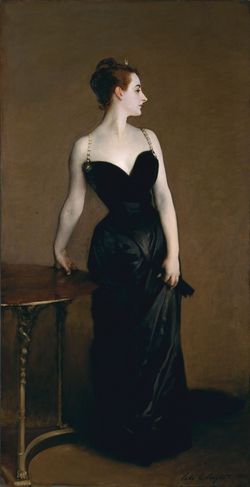 Eakins’ large portrait in its newly-thought out position is climactic, given that the next gallery, if one is following the chronological arrangement, brings us to the latest works, the Ashcan School (1900-1920), not a strength of this museum — there are some good paintings, e.g., but no George Bellows.  The American Impressionists nearby, of the same period, fare better.

Sculptures are exhibited elsewhere … art of Native Americans is elsewhere … Modern art is elsewhere — don’t expect to find Jackson Pollock in the New American Wing!   There are no seventeenth-century paintings, although these galleries include an extensive collection American silver from 1660 to 1800 (including of course Paul Revere), Late Colonial furniture, and a fully re-created and furnished entrance hall from a the pre-Revolutionary Van Rensselaer Manor House.  Few women artists are represented, and little “outsider art,” partly because, by definition, the medium is mainly painting.  There’s no consistency in the decisions underlying these arrangements — it’s a matter of taste, past practices, the “feel of things,” and the history of the museum’s acquisitions, and in that sense, “The New American Wing” is something of a misnomer — buyer beware. 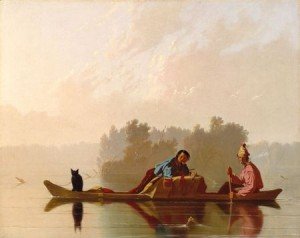 For information on visiting the Museum.

Film Note | The Iron Lady | With Meryl Streep as Margaret Thatcher, Jim Broadbent as Denis Thatcher, Alexandra Roach as the Young Margaret and Harry Lloyd as the Young Denis

This exhibition is a very real addition to the cultural life of us all. One fully realizes that such an exhibition has to make decisions as to what is shown, how it is shown and what is emphasized. I enjoyed walking through the painting. I do not think that the craft, e.g., silver and furniture, really added to this. Again, in all respect to the curators, I would have preferred to see more of the graphic and sculptural arts then the crafts. If they were to show crafts, why not show this more in depth and that would be a… Read more »