I never saw anything funnier than Enter Laughing. The situations are hilarious, the songs are witty, and the cast is out of sight perfect.  If you enjoy laughing, really, you have to see this.   It has  only one “message”:  the life-affirming power of pure fun.

Set in the 1930’s and based on Carl Reiner’s semi-autobiographical novel, Enter Laughing tells the story of David Kolowitz, a boy from the Bronx who aspires to be an actor against the wishes of his over-protective parents who are plotting his career as a pharmacist, “almost a doctor”.  Kolowitz, who’s given to fantasizing success and seeing his name in lights, is played by Josh Grisetti , a major talent and — it’s easy to see from this show — a star in the making:  he sings, he dances, he acts, and he is so funny.  David in the play, however, not only lacks talent but generally hasn’t a clue, yet somehow bumbles through to an onstage debut, bounding from stage fright to worldly pronouncements in the voice of Ronald Coleman.

He gets to kiss the girl, too, the show-girl gorgeous Kate Schindle playing Angela Marlowe, who delivers the tongue-in-cheek torch song, “The Man I Can Love,” with the absolute seriousness of true comedy from atop a piano, her feet entangled with the keys — one of many show stoppers. She has a liberated, to say nothing of open minded, view of the man she can love.

Richard Kind, surely one of the funniest men alive today (the others being Josh Grisetti and Geoffrey Rush) plays the theater impresario Harrison Marlowe, Angela’s father, with a combination of takes, timing, dead pan, and rational/nutty thought processes that’s delicious.  He’s fascinating — I could watch him forever.  I’d urge you to see this show if only to hear how he answers the phone as David’s butler when Greta Garbo calls (“The Butler’s Song”).

The singing and dancing of the two old guys in the play, David’s boss in the machine shop and his father, in their dual number, “Hot Cha Cha”, is  another — touching — show stopper.

And so it goes … hilarity after hilarity … witty song after song … and just when you’re feeling a little sorry it’s over too soon, Grisetti comes up with one more gift — his bow — so you can Leave Laughing. 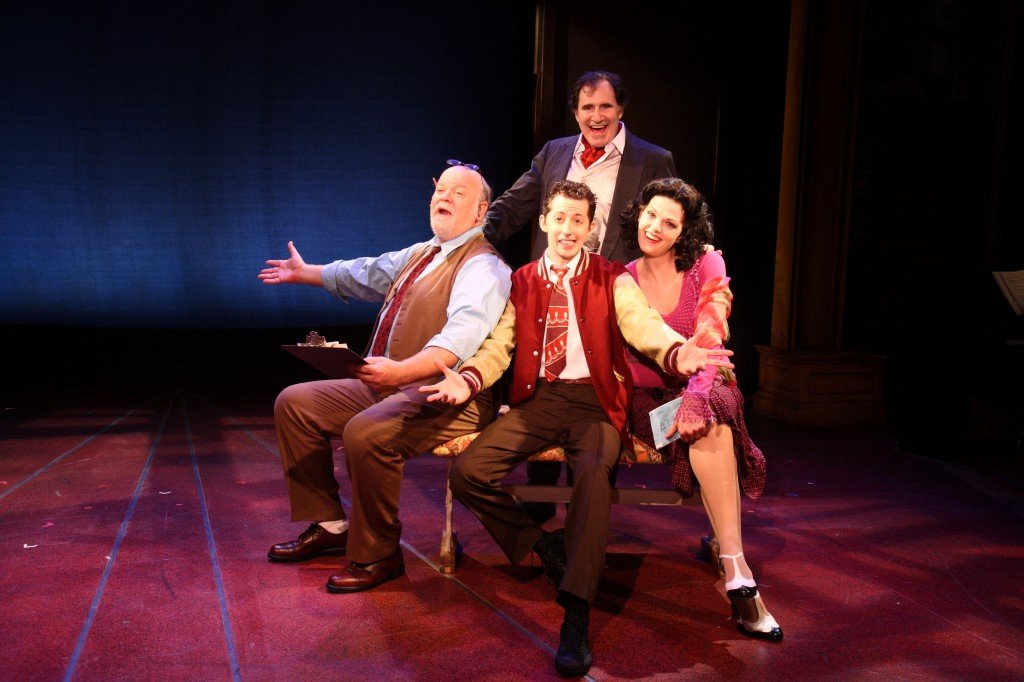 Indeed – really enjoyable, funny, lots of laughs, and a wondrous performance. Perhaps the greatest thrill of the evening was to watch so many excellent performers put together such a seamless and wonderful evening of theater. I agree wholeheartedly with you – this is a must-see.