Unnatural Acts is a strong and thought provoking play based on a true and tragic event:  the purge of a group of gay men at Harvard University in 1920.  The catalyst was the suicide of Cyril Wilson, assumed to be gay, which led Harvard to get rid of the group of homosexuals associated with him, evidently to avoid scandal.

One by one, ten students and one instructor suspected of being part of Wilson’s cadre of homosexual friends were interrogated by a “Secret Court” of high level administrators which determined their “guilt” as homosexuals, or their “innocence.”  Most were found “guilty” and were expelled.  We learn, by the end of the play, of the blight the investigation and expulsion cast on almost all of their lives.

It’s a fascinating and very clever theatrical choice that the only characters we see in the play are the eleven directly affected men.  The Harvard disciplinary board is a dark presence, its activities illuminated only by the monologs of the accused young men called in to testify and responding to questions.  All focus is on the men themselves, their lives, personalities, purposes, sexual drives (though oddly, nobody seems in love), interactions, and the effect on these of the punitive purge.

At the start of the play, the eleven react variously to Wilson’s suicide.  Some close friends feel grief and attend his funeral, acting as pallbearers, while others who knew him casually are more distant.  As the play advances, though, the noose tightens equally around all of them.  That’s a powerful structure.

Early on there’s a wild party in the suite of Earnest Roberts that I think everyone who sees the play is bound to remember for a long time.  It’s very well staged.  There’s drinking, music, lovemaking, and banter while Roberts, “the 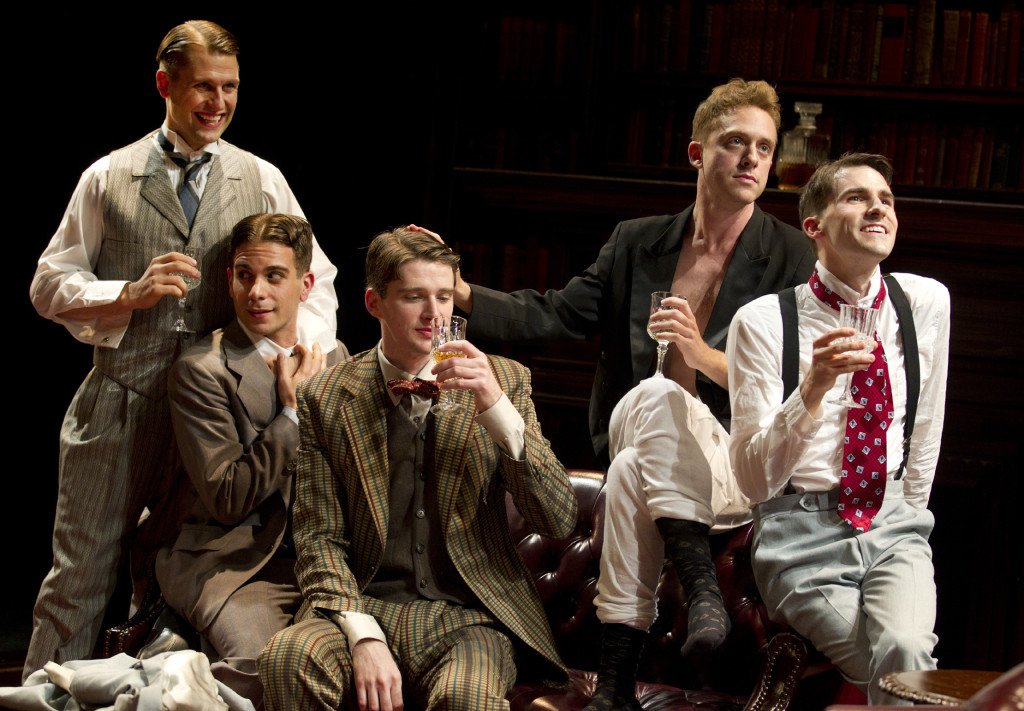 The party’s warming up …  from Unnatural Acts.  Photo:  Classic Stage

ringleader,” makes witty proclamations from tabletops, wearing a gorgeous sequined flapper dress.  The process that will crush most of them is well underway but they don’t understand that yet, partly because these men, mainly sons of privilege, have a sense of invulnerability.

But soon enough they’re all roped in.   Being a congressman’s son won’t get you out of this one.

Under interrogation, some are damned for telling the truth and others damned for lying.  One egregious liar who’s gay is exonerated and one truth-teller who’s straight receives a relatively mild one-year suspension (and may be the only one who goes on to live a long time and have the kind of fulfilled career that Harvard men look forward to).

The disciplinary board appears to have tried sincerely to separate those who were “guilty” from those who were “innocent” — as those words applied to gays in 1920.  But “sincerity” is irrelevant — the play drives home that secret deliberative bodies are inherently cruel and unjust, and that intolerance set in motion against a class of people judged to be different from oneself is cruel and unjust.

Why did Harvard do it?  Since the disciplinary board is a kind of composite character in the play, I missed knowing what motivated them.  Was it blind prejudice?  Avoidance of scandal?  Or?  The investigation begins right after Wilson’s death and Harvard already had a reputation as the most “faggoty” school: this suggests the administration had been looking the other way with regard to gay activities until Wilson’s suicide raised the fear of scandal, but that’s a guess.  Those eleven men would have been guessing about that, too, and talking it over.

Tony Speciale conceived the play and shepherded it through a process of collaborative creation with the cast, and it’s presented as an ensemble piece.  The actors are for the most part very good, though some characters could use greater differentiation — that’s an awful lot of young men in suits to keep track of (though it’s easy to remember the nude track star and Roberts in a dress!).  That nobody’s in love, however, is unlikely.  A focus on a deep love among these individuals would heighten the play’s impact.  The direction, with dramatic switches from a bright to a dark stage, is tense and clear.

This is really an example of many cooks who didn’t spoil the broth, but arrived at a sturdy, unified drama that tells an important story.

This sounds like a very important play which uses homophobia as an example of the intolerance of deviance – no different than the McCarthy hearings or the inquisition – all carried out by the ‘establishment’.