Hildegard Von Bingen was a remarkable woman of the 12th Century, administrator, author, artist, physician, musician and composer, and councilor to leaders of state.  The film stresses two personality traits — her determination and emotional volatility — at the expense of her strong, thoughtful intellect.  It also seems odd that, as visual art, the film makes no use of her vibrant manuscript paintings.

We see the blinding light that often strikes her inner field of sight (it’s thought she had migraine) that partly forms her Visions.  These Visions — personal and untestable — along with her stubborn rebelliousness, create conflict with many in the Church hierarchy, in particular the nasty Abbot of her first convent.  She often seems quixotic in taking on — even egging on — the powerful, particularly remarkable in that she bears the inferior status of a medieval woman.  Yet, while she confronts near impossible odds in support of her Visions — or just what she wants — she wins some big battles.

Her portraits as a Visionary have come down to us in painted manuscripts.  For example, by clicking on this link to her portrait in the Liber Scivias,  you can see Hildegard receiving a fiery Vision and writing about it, with her scribe in attendance, ca. 1145.  You can notice in this picture that Hildegard and her male scribe share an intellectual world — their heads are in the same space — but their bodies are carefully kept in clearly demarcated separate spaces.  The clarity with which he is shown listening but not writing indicates the illustration may have sought to counter rumors that the scribe, not Hildegard, was responsible for her books.

The movie gives some clues to her success but falls short of conveying how it all could happen.  It’s best at showing her stubbornness and passionate emotionality, but considering the obstacles, how was that enough to get her what she wanted?  When the Magistra of her first convent dies, the Abbot appoints her the new Magistra.  Why on earth — when he’s perennially distrustful of her rebelliousness?  True to form, she immediately counters him by insisting the nuns elect their next Magistra.  Then, when she wins their vote, the nuns encircle her with joyous, loving hugs.  What did she do to earn their love or confidence?  We don’t know.  As for her influence at the state level, once she visits the grandee of the day but the advice she gives is homily, and nothing really happens.

The film over spends its energy on “romance.”  Hildegard severed her nuns from her monastery-convent to found a new one solely for women, Rupertburg:  instead of conveying a prescient and productive act (born out by history), the film motivates this vastly difficult task by a love affair between a monk and a nun.  Even more important, too much of the film is devoted to Hildegard’s passionate, physically unfulfilled love for Richardis, the daughter of an aristocratic family who comes to Rupertsburg as a teenager and then, for the sake of her family’s ambition, leaves to become an Abbess elsewhere.  Barbara Sukowa is magnificent in conveying the love-sick, desperate Hildegard but this tacit love affair with its anguish of separation goes on for too long and dissipates the arc of Hildegard’s success.

Vision brings the medieval world to life physically and spiritually — that’s a good reason for seeing it.  The sense of authenticity is very satisfying.  The Romanesque monasteries and convents with their hand-wrought stone columns and arches, horrific but fascinating paintings and lush gardens hold great appeal.  Narrow minded ideas, hatreds and vengeance cohabit with spiritual passion;  religious enterprises are fueled by politics and ambition.  Vision is beautifully produced and gives us some insight into Hildegard von Bingen but one is left wishing it went further to illuminate the source in her personality of her prodigious accomplishments and their impact on Europe of the 12th Century.  Hildegard’s influence continues:  below is a detail of an illustration from an artist’s book by a contemporary artist that takes its inspiration from Hildegard von Bingen. 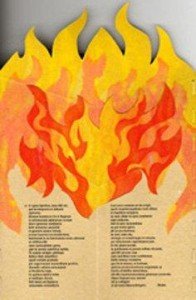 It’s amazing how much people could infer about physiology, science in general, without having miscroscopes, telescopes and all the other devices which let’s us “see” things that weren’t known then.

The life and contributions of Hildegard von Bigen are both numerous and substantial. The film touches briefly, usually indirectly, on many of the most important of these such as her medical writings, statesmanship, and organizational ability. At one point the film uses the 11th-century knowledge of conception in a mocking fashion. Yes indeed 1000 years later this does not somewhat unreal, but in its time it was the accepted cannon. Also as noted in the review are paintings as seen in her manuscripts were really not exhibited. However, this being said, it is to be applauded that the film was… Read more »