There’s an archipelago in the English Channel, nearer to France than to Britain, that England felt it could not defend during World War II and so it fell under German occupation.  Gabriel takes place in February, 1943 on one of the small, occupied islands, populated by natives, the German occupiers, and slave laborers the Germans imported from Eastern Europe to construct fortifications. We never see the slave laborers but their presence is felt in the looming, bunker-like backdrop with its slit-eye.

Jeanne Becquet is trying to keep her hearth and home together in the face of food shortages and the ever-threatening arbitrary violence of the Nazis who, in this small scale slice of large scale totalitarian life, are their own law. As the poetic but ideologically Nazi German officer, Von Pfunz tells Estelle, Jeanne’s willful daughter who believes she can’t be killed because she’s a child, “My dear, there’s something you have not yet comprehended about war.”

Von Pfunz is powerfully attracted to Jeanne, letting her — and her daughter who’s up to nasty quixotic pranks in the cause of freedom — off the hook. Yet he’s always the Nazi, revealed in full horror in his purloined diary and in the final choice he throws Jeanne. She berates him while flirting with him, hating him and what he stands for while leading him on to protect her family — and at the same time she’s genuinely drawn to him — one thinks of Salvador Dali’s sense of the sex appeal of fascism.

In contrast to the complexities of Von Pfunz, Jeanne and Estelle, Margaret Lake, an older woman who helps out around the house, is there mainly, I think, to broaden the view of the occupation beyond those in Jeanne’s family. And Lilian Becquet, the wife of Jeanne’s son who’s presumed dead in action, is totally good — although she does have one serious imperfection in Jeanne’s eyes as well as Von Pfunz’s: she’s a Jew. That aside, she’s rather angelic.

And speaking of angels, Gabriel, a man handsome enough, and ambiguous enough to be an angel is washed up on the island’s shore and brought home by Lillian and Estelle where he lies unconscious in Jeanne’s home while Lillian and Estelle fall in love with him, each in her own way. He awakes, but is amnesiac. Who is Gabriel?

Since Gabriel speaks fluent German, Von Pfunz believes he may be “one of ours,” a missing German SS leader. But he speaks English equally fluently and so may be a recently downed British airman.   German or British, discovered between life and death, he seems both of this world and of some other, Gabriel the angelic messenger who links heaven and earth — at least we hope he’s from the heavenly realm, but it could be otherwise.

Buffini, a daring and almost shockingly inventive playwright, derives suspenseful plot turns from these characters thrust into a dangerously close situation. Will Von Pfunz discover that the Becquet’s are harboring a fugitive? And will that work to or against their advantage? What still worse trouble will the volatile Estelle get her family into? And to what extent and for how long will Pfunz’s attraction to Jeanne save this family from itself?

Like Buffini’s play Dinner  (the recent production in Sag Harbor reviewed here), Gabriel is presented as realistic but drenched with symbols, some clearly recognizable as Christian and others more ambiguous.  In Dinner, the young man who arrives at the party, an outsider and object of fascination and love, is (among other things) a Christ figure, and here, too, the young man thrown up on the beach, again an outsider and object of fascination and love, has the name of an angel. The language of the play is filled with images of flickering light: is Gabriel a starry messenger or a fugitive from the flames of hell? Since the young girl’s name — Estelle –means star, does that throw the balance toward hope?

I won’t reveal whether or not Gabriel saves the day but he uses the same device to do it as in Dinner — something found around the kitchen that can easily do double duty as a weapon. Dinner is, if anything, bolder in its wild inventiveness and symbolic power, but Gabriel holds the special interest of revealing a situation of World War II not well known. This is a near-to-flawless production of a fascinating play by a highly original and intriguing playwright.

Gabriel plays at the Linda Gross Theater of the Atlantic Theater Company in NYC’s Chelsea through June 20th. 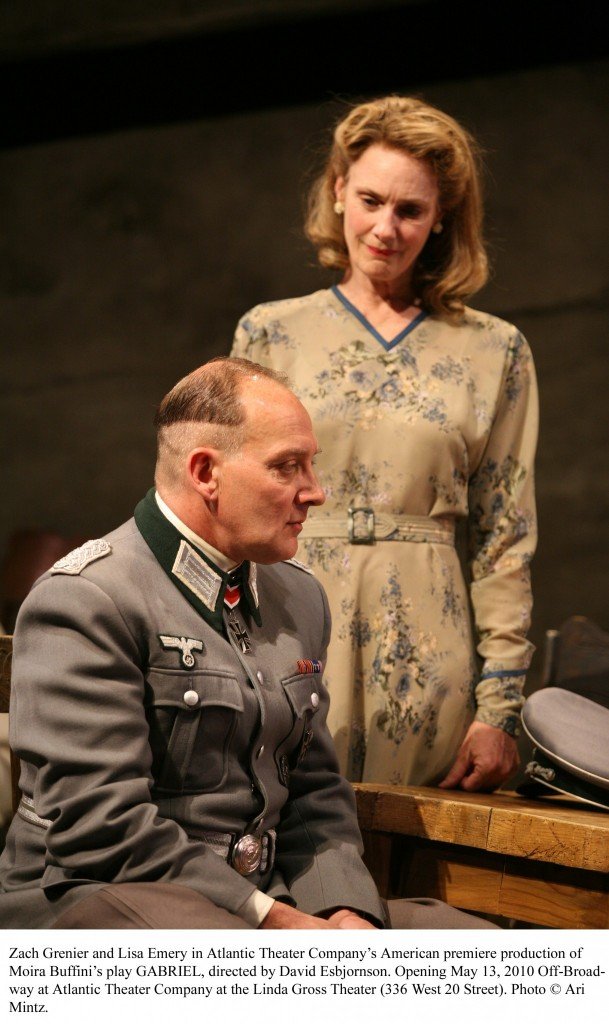 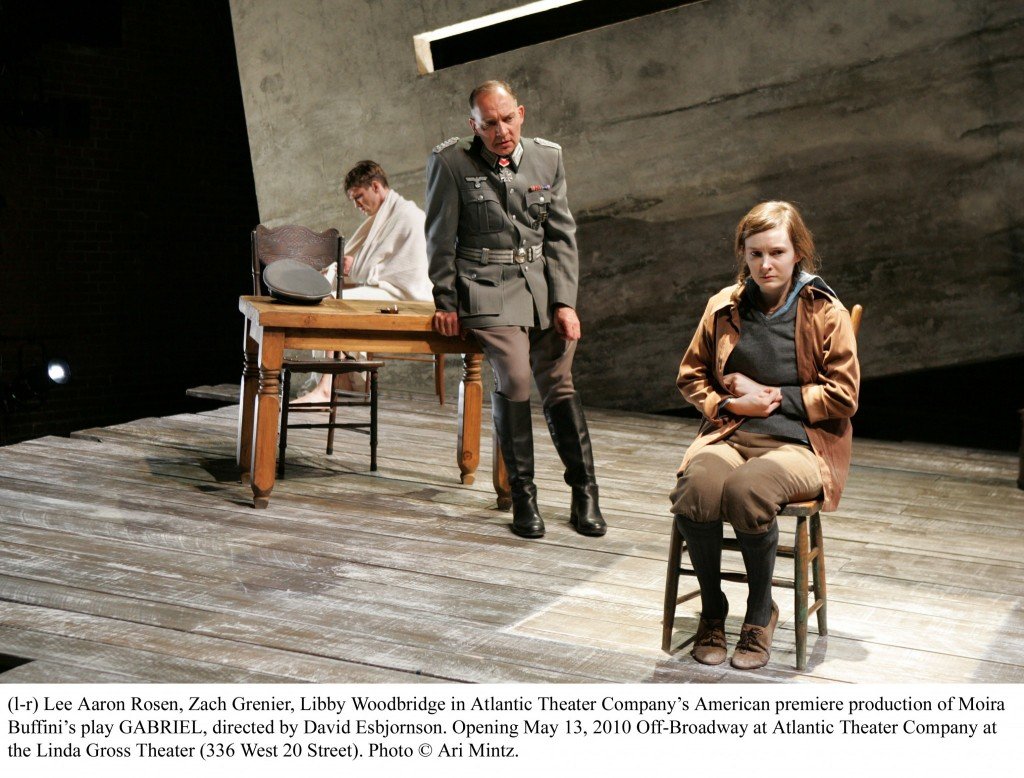 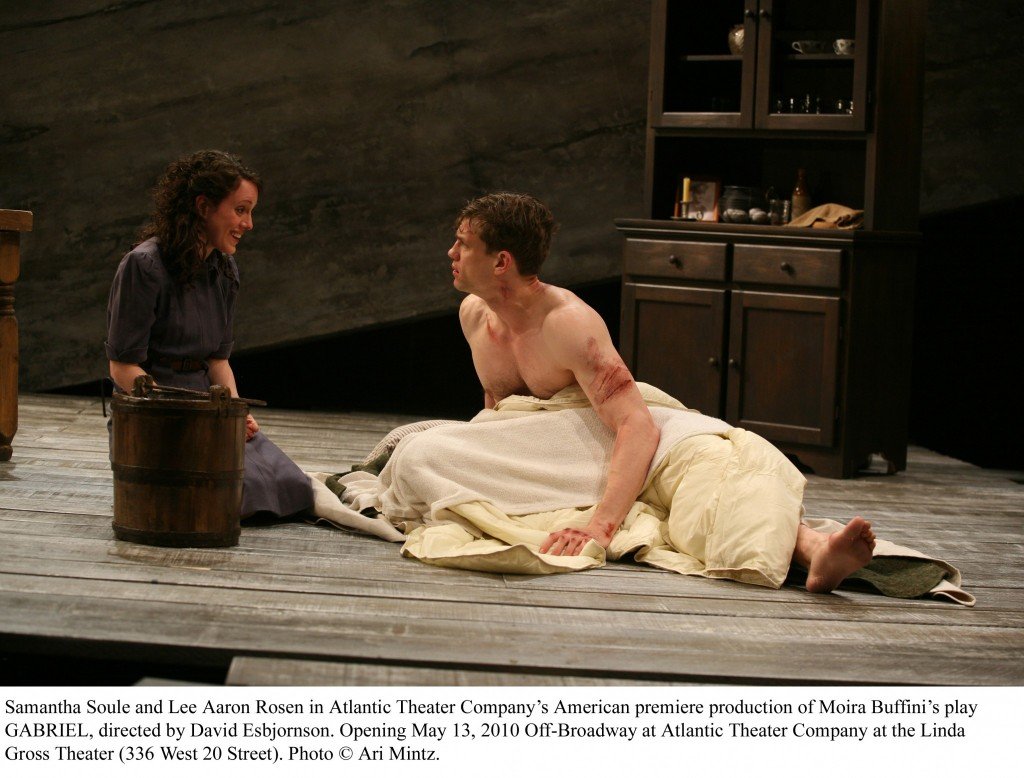 Review | The Habit of Art by Alan Bennett | Directed by Nicholas Hytner | Starring Richard Griffiths and Elex Jennings | Simulcast of the Play Presented by the National Theatre, London

A very good evening of theater – there is suspense, good characterization of people and excellent acting. Ms. Buffini brings back to our awareness though the images from von Pfunz’s poems the horrors of WWII which are too soon forgotten. The play is both history and metaphor. I was glad to have seen it.