The Flea is presenting six plays by six authors, each with some reference to the recession.  The actors are drawn from The Flea’s “Bats,” the young, capable and energetic actors of their resident company — you find yourself hoping for a good show at least as much for them as for yourself, but it doesn’t happen.  For most of the plays, the link to the recession is so synthetic it doesn’t matter.  The plays don’t matter much either, which is too bad for what must have seemed like a good idea.

Classic Kitchen Timer by Adam Rapp is based around a kill or be killed bargain.  A character out of work is offered $25,000 to murder a baby or herself be murdered.  If someone “in the audience” prevents her from killing the baby in a set time, she’ll killed by whoever interferes, which occurs, leading to the bargain being reset for him — kill the baby and make a lot of money or be killed, and so on …   The situation is so bizarre that it doesn’t illuminate the lives of those out of work because of the recession (or for any other reason).

Fucked shows Itamar Moses’ keen ear for the dialog of contemporary relationships as in his enjoyable Love Stories at The Flea, reviewed here February 2009.  There are similar amusing moments in this one, but nothing really happens:  the girl leaves but that’s a foregone conclusion, and it’s also obvious from the start that the guy doesn’t care.  A phone conversation reveals that the guy’s dad has lost money in commodities but that doesn’t figure in the play and so seems squeezed in to fit the recession theme.

In New York Living, Thomas Bradshaw returns to his loveless couples breaking up and recoupling — what difference does it make who as long as there’s a live body and some sex?  In his recently produced The Bereaved, reviewed in September, this theme had a political purpose — it was the engine that drove a revolutionary parable.  Here, the “issues” between the couples are childishly prurient with much ado about erections, and the mechanical breakups and recouplings have no purpose at all, like the plot of Cosi Fan Tutte without the music.  Needing a place to live figures but — boom or bust — that’s always true for young actors in New York City.

Severed by Erin Courtney is a conversation between two people on a bench in which the young man, in a fine suit, is out of work but optimistic, and the young woman, who seems briefly attracted to him, leaves for her job with preschoolers wearing as she does for work a huge over-the-head bulbous eunuch’s mask.

In Recess by Sheila Callaghan, insane people mill around an open area as in a classic Bedlam.  One lies dead and another’s dead by the end from compulsive exercise and anorexia, while a couple plays footsies, men fight, and the group eats a meager meal while imagining better fare.  So many people appear nude in Recess that by the end it’s totally clear that there’s a difference between male and female anatomies but then that’s not news.  Recess, the program says, takes place in an “apocalyptic near future when the bottom has indeed fallen out” but you wouldn’t know if you hadn’t read it.

Unum by Will Eno, about the mighty and not-so-mighty dollar, develops slowly and stiffly and with empty pauses between episodes, until finally it reaches a truly affecting passage when a mother with Alzheimer’s is moved to a care facility because of the squeeze on living space.

Two performances stand out among many good ones.  In Classic Kitchen Timer, Nick Maccarone is wry and balletic as a Host, really a Master of Ceremonies in the style of Joel Grey in Cabaret  (though the role seems pointless in connection with the play).  Jessica Pohly in Fucked has a terrific comic delivery while conveying genuine feeling, like Carol Burnett.

The Great Recession plays at The Flea Theater in NYC’s Tribeca through December 30. 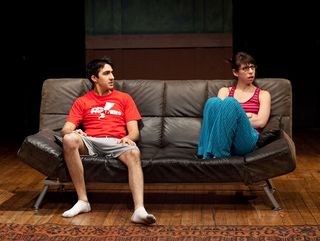 Dorien Makhloghi and Jessica Pohly in Fucked by Itamar Moses
Photo: Courtesy of The Flea Theater

I agree – the young talent deserves and needs much better material. It is also very disappointing that the Flea, which has given us so much excellent theater in the past, has seen fit to invest in these six very sketchy skits. However,” Hope springs eternal in the human breast”!