What a lark!  What delicious wit!  What a pleasure to see the Pearl’s production of Shaw’s Misalliance!  It would be hard to have a better time.
All the events of Misalliancetake place one summer day in the conservatory of the Tarletons’ English country mansion.  John Tarleton has made a fortune in underwear, “rags-to-riches” you might say, yet in this play written in 1909 one of his guests is a British Lord, along with the Lord’s son who wants to marry Tarleton’s daughter, Hypatia.  Thus one of the themes of the play is about the new melding among the classes in England, as the upper class gets poorer and the upper middle class gets richer and buys them out.

The name, Hypatia, is a clue to another theme, women’s struggle for independence and the opportunity to engage in meaningful activities in the world at large — to have a career.  Hypatia is a feminist exemplar from the ancient world, a philosopher, astronomer, mathematician, inventory, administrator and lecturer in Alexandria, Egypt, tragically murdered as a heretic and for not knowing her place as a woman.  We find out quickly Hypatia Tarleton is longing for some unformulated adventure to fall from the sky and free her from her penned-in existence.  Unlike the earlier Hypatia, though, she doesn’t dress mannishly like a scholar:  she’s delicate, pretty, and aware of her feminine allure so romance — as well as ideas — are in the air.  She selects her husband — not the other way around — so in that, at least, she’s one of Shaw’s “new women.”

And who has named her “Hypatia,” her father, of course, who can’t help making money but is also a great reader, drenched in the world of ideas, and ready to suggest at the drop of a hat which author you’d best read to solve whatever your current dilemma might be … until in a critical moment in his own life it occurs to him what he should read, in one of the most amusing lines in all theater.  To think of how Shaw leads up to that moment is thrilling!  John Tarleton, big, blustering, rich, sensuous, realistic and idealistic is a great character, and holds the play together — one doesn’t want to lose him, and Dan Daily plays the part to a T.  The moment the play was over I wanted to see it again — to spend more time with John Tarleton, and see what author to fit what life issue he would come up with next.

The physically weak but brainy aristocrat’s son, Bentley Summerhays, is played off against the no nonsense, fist ready Johnny Tarleton … but Johnny has his sensitivities, too.  No character is two-dimensional.  Of the women, Mrs. Tarleton comes closest to seeming like an old-fashioned, nurturing, well-domesticized wife but she goes along with that radical new idea — an open marriage!  The advent of three newcomers — two of whom actually do fall from the sky in what is surely the first plan crash in theater sets the plot in motion.  Joey Percival and Lina Szczepanowska (what fun Shaw — and the characters — have with pronouncing that name) bring various and inventive new love interest, Lina an archetypal tough career women in boots with a sexy Eastern European accent.   The Man who enters this garden of earthly delights near the end of Act I, the product of one of John Tarleton’s flings with the women in his factory, does his part as the representative of the embittered lower classes, but he’s tenderly co-opted by Mrs. Tarleton, for all his anarchist fury.  In Misalliance, the manufacturing Middle Class is winner-take-all.

The play has a few loose ends but why complain in the face of Shaw’s wonderful stream of characters and wit … or was I co-opted by wit?  I don’t care — it’s a total delight! 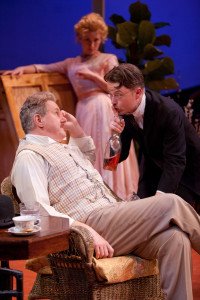 Thank you for telling me about Hypatia – it really adds to the enjoyment this wonderful play superbly acted. Shaw does not waste a line and there are many levels of humor which really deal with substantial social conditions – but you laugh all the way. This is a must see.