Wide Awake Hearts lets us swim around the entangled love affairs of a set of four attractive people making a movie. 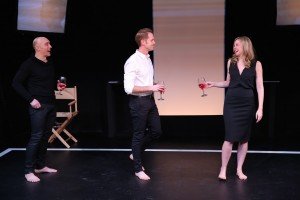 We’re in the affluent home of a hip movie writer, A, and his actress wife, B, who’ll star in his next movie.  All characters are named with the first letters of the alphabet in order of appearance.  Why? Perhaps because in pairing off as lovers, they mix and match as readily as letters make words. The entry of another man, C, and, eventually, another woman, D, into their living room cause recrimination, anger revelation, and a lot of screaming, something like Who’s Afraid Of Virginia Wolfe, although the characterizations are less rich than in Albee’s play.