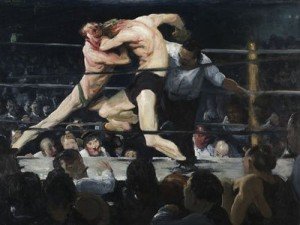 As I began to walk through the George Bellows exhibition, I felt this is the greatest American painter ever!  That’s how powerful the early paintings are.  In front of those large and powerful canvases such as Stag at Sharkey’s, it took awhile to even start thinking of his powerful competition among American painters … including Thomas Eakins who had a great influence on him.