If you want to see a top-notch production of  one of the best American musicals, see Cabaret at the North Fork Community Theatre.  The songs, the musical splendor, the theatrical extravaganza and the powerful story are wonderfully realized in this production, and with an orchestra of eight fine players – you don’t always get live music like that on Broadway.

We’re in 1931 and the waning years of the Weimar Republic in Germany, a time of great creativity,  cultural daring and the freedom to fulfill it – as at the Kit Kat Klub in cosmopolitan Berlin.  There, it seems anything goes – an attitude, a spirit, a world view embodied in the insinuating, fascinating, sexually ambiguous Emcee of the Kit Kat Klub who oversees the events and holds the show together.

A young American would-be writer from Harrisburg, Pennsylvania, Cliff Bradshaw, gets a quick immersion in let-loose eroticism thanks to the British expatriate singer-dancer Sally Bowles. She’s thrown out of her job at the Kit Kat Klub – but thank heavens not before starring in the show’s dazzling, irresistible opening number, “Wilkommen”!

Needing a place to stay, she moves right in on the astonished Bradshaw, providing a quick introduction to the relatively naïve American on:  unmarried people living together, sex as a way to make a living, abortion, and … romance.

Their elderly, wise-to the-world landlady, Fräulein Schneider, a survivor in an eternally tough world, sings the tough-minded song, “So What?”  Sheer Brecht. So what anything.  So while she seems proper, it’s in character that she, too, is having an affair, with Herr Schulz, a successful fruit-seller widower who plies her not with roses but – even better — with Italian oranges.  Romance, it turns out, is for older people, too.  A theme of this show is that romance is for everybody – mix and match, boys and girls, boys and boys, girls and girls, threesomes, not to mention me and my gorilla.  I wonder if Woody Allen had Cabaret in mind when he wrote Whatever Works.

With all that, it’s not a big surprise that buxom Fräulein Kost in her Japanese silk dressing gown has a series of sailors visiting her at Fräulein Schneider’s rooming house. It’s all a bit over the top for the American from Harrisburg, Pennsylvania but not for long — he adapts quickly.

Why then does he leave Berlin?  Because he can’t adapt to the Nazis.

As the Weimar Republic fades, the Nazis rise to power.  The signs are there.  Swastikas appear on arm bands.  The song “Tomorrow Belongs To Me” is sung in a sweet soprano by a Young Boy, wearing a brown shirt, on his way to being a Hitler Youth.  Thugs break the window of Her Schultz’s store.  We only learn toward the end that Herr Schultz is Jewish because it hadn’t mattered before but now it does. Backing out of their marriage engagement– and before you get a chance to judge her — Fräulein Schneider sings, “What Would You Do?”  Well, what would you do?

Brianna Kinnier as Sally Bowles takes over the stage with her dancing and singing in the first rousing number, “Wilkommen.”  She sings that marvelous music while kicking up her flexible legs, from the floor the chair tops!  She’s joined by an excellent chorus, of singer-dancers, professionally trained, and wittily individualized:  Chelsea Chizever, the show’s talented choreographer, dances gorgeously in the role of Texas, Tamara Flanell, David Lopez, Katrina Lovett, Julia Pulick, Lisa Rasmussen, Haley Unger and Ryan Slatniski.   Chizever’s  choreography throughout is original, varied, creative, and captures the spirit of the times.

Justin Harris is astonishing as Emcee.  He seems always there – as the cabaret of life is always there, and he delivers his alluring songs, alone or ensemble,  “Wildommen,” “Two Ladies,” “It Couldn’t Please Me More,” “I Don’t Care Much,” with a worldly-wise irony that makes you want more.  “If You Could See Her” is a number that has to be seen to be believed – what a creative moment that was for the writers of this show.  Harris’s rendition of “Money,” with the ensemble, designed aptly and wittily circular by choreographer Chizever, is a show stopper.

Linda Aydinian puts across the songs of Fräulein Schneider with a warm intelligence and  a rough but tender pathos.  While no one sings the role with the sardonic catch in the voice Lotte Lenya brought to it in the original 1966 production (heard on YouTube), Linda Aydinian is terrific in her own way.

Michael P. Horn is touching as Fräulein Schneider’s lover, Herr Schultz, a man you can depend on to solve problems, but now we have to worry about him.  He’s got the Nazis to deal with — like Ernst Ludwig, whom Colin Palmer plays as a rapacious wolf in the clothing of urbane civility.  It looks like those are problems even Herr Schultz won’t solve.

Nick Mozlenski as Cliff Bradshaw sings well in the duet with Sally, “”Perfectly Marvelous.”  Jennifer Eager is a humorous and practical Fräulein Kost.

John Hudson as Max, the Kit Kat Klub’s owner, is a convincing brute who uses politics as an excuse to dole out the beatings.  Tom Del Prete brings intriguing delicacy to the Dancing Gorilla.  As the Young Boy, Joseph Podlas’s pure voice heralds an ugly future in “Tomorrow Belongs To Me.”  Matt Eager is a persuasive bureaucrat as the Customs Officer/Official.

John Kander’s witty, powerful music for Cabaret, with lyrics by Fred Ebb, is rendered by the strong orchestra directed by George Moravek, who plays the piano, and with Bob Blank on the guitar, banjo and ukulele, Crystal Crespo on the trombone, Ben Eager on the violin, Will Green on the drums, Ryan Nowak on the tenor and alto saxophone, Colin Van Tuyl on the trumpet, and Marie Varela on the alto and soprano saxophone and flute.

Cabaret is inspired by and derives much of its magic from The Threepenny Opera, with book and lyrics by Bertolt Brecht and music by Kurt Weill.  It’s based on the play I Am A Camera by John Van Druten that draws upon stories by Christopher Isherwood.  Thank you, North Fork Community Theatre, for this outstanding production of an important American musical. 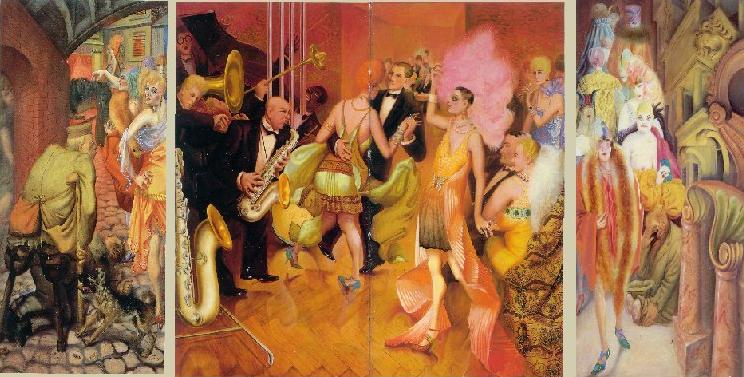 The North Fork Community Theater Is to be greatly commended for doing such a wonderful production of this could be difficult musical to perform. All characters came through with the pathos and cynicism and the turbulent times also rang true. What an excellent lesson with those who were born after 1945. Women also think the orchestra – cool musical skills were much appreciated.