A symposium — a drinking party with dinner in the offing, only here the participants are not Socrates and the male literati of the “golden age” of ancient Athens, as in Plato’s dramatic dialogue.  This symposium is of 20th-century writers and — quite an update! — they’re all women:  Gertrude Stein, Alice B. Toklas, Agatha Christie, Lillian Hellman and Dorothy Parker, along with Muriel Gardiner, well known for saving many Jews during World War II, and Bernadette, a young house maid.  The time is early in the war, and the gathering at the Stein-Toklas household in the French mountains. 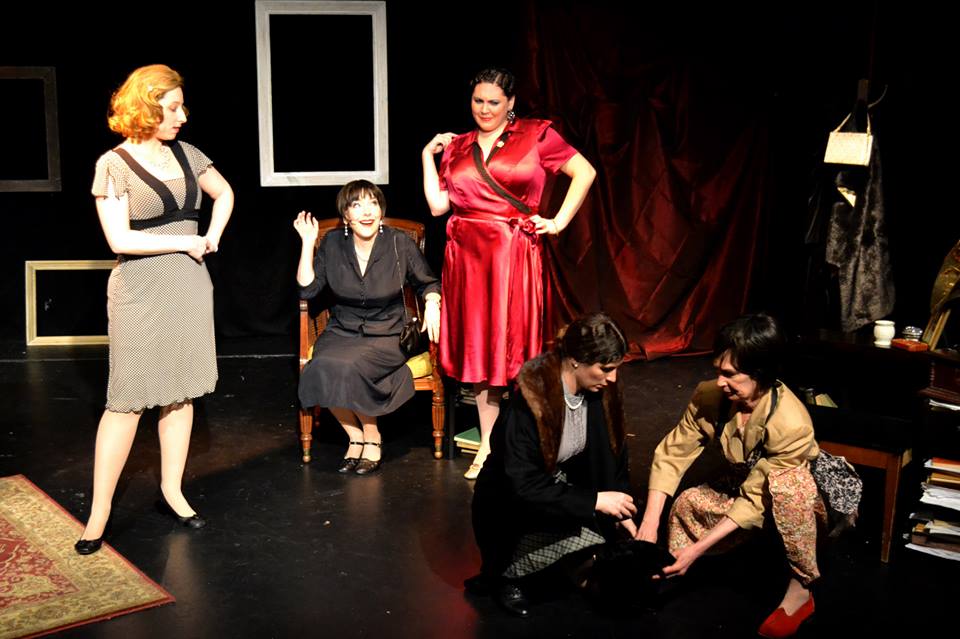 As Alice and Gertrude await their author guests, Stein speaks of them so sardonically that you wonder why she invited them, but of course, that’s the woman we fast come to know, full of contradictions.

The first arrival is not a writer (though she later became one):  she’s Muriel Gardiner, in France to raise money for false passports to enable Jews to escape from Germany.  Intending to sleep at the train station, she’s persuaded to stay (a Platonic trope).  Soon Lillian Hellman, Dorothy Parker and then dramatically Agatha Christie arrive, and tongues are loosened by plenty of scotch, poured on request by the somber Bernadette.  Although nobody formally sets the theme for the evening’s conversation in the way Plato made famous, there is one: self-revelation.  And as in Plato, it helps that the liquor flows freely.

The authors set themselves to figuring out what the circumspect Muriel Gardiner is doing here, and it emerges that she’s undercover as a spy and freedom worker.  What a fascinating choice McCasland makes:  the first identity revealed is the one that’s most apparently hidden (though I thought she was too loose-tongued for a spy, she spilled the beans too easily).  We learn not only her purpose but, as she speaks, of her passionate devotion to her cause, powerfully conveyed by Kristen Gehling, and of her personal life and sacrifices. 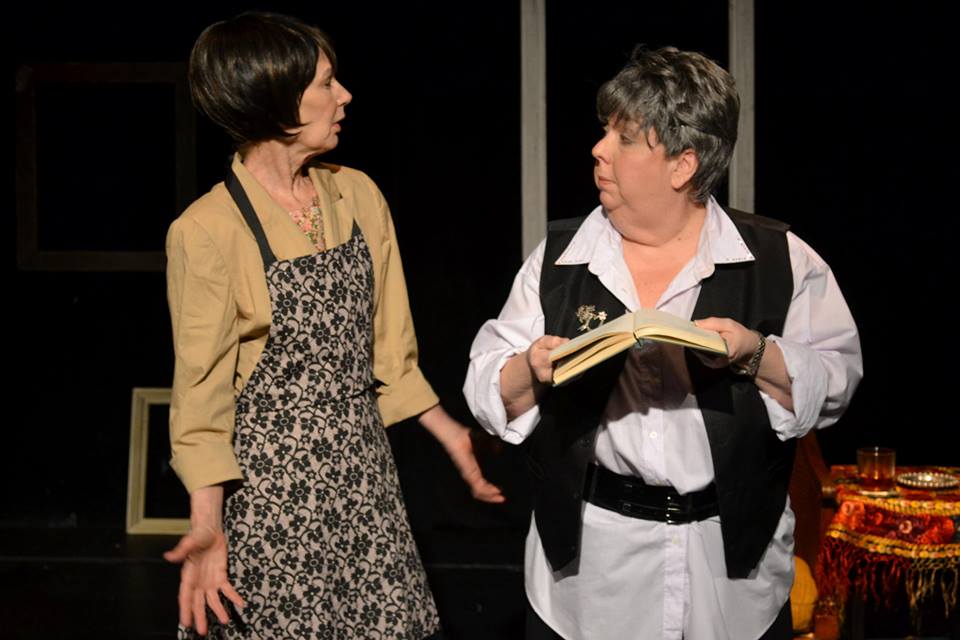 McCasland’s outstanding ability to write in the diverse voices of others reaches a climax in the revelatory monologue spoken — uttered, stormed forth — by Gertrude Stein in which this paragon of toughness wails and, yes, complains:  Why am I not normal?”, a plaint that goes way beyond her being gay.

She’s homely, ugly, odd looking, a character, she doesn’t talk like other people, she doesn’t think like them, she doesn’t write in a “regular” way, she’s not normal.  And in case you think for one moment that could be an easy path, she lets you know for sure: it isn’t.  That monologue, as played by Maggie Wirth, is a theatrical high point. 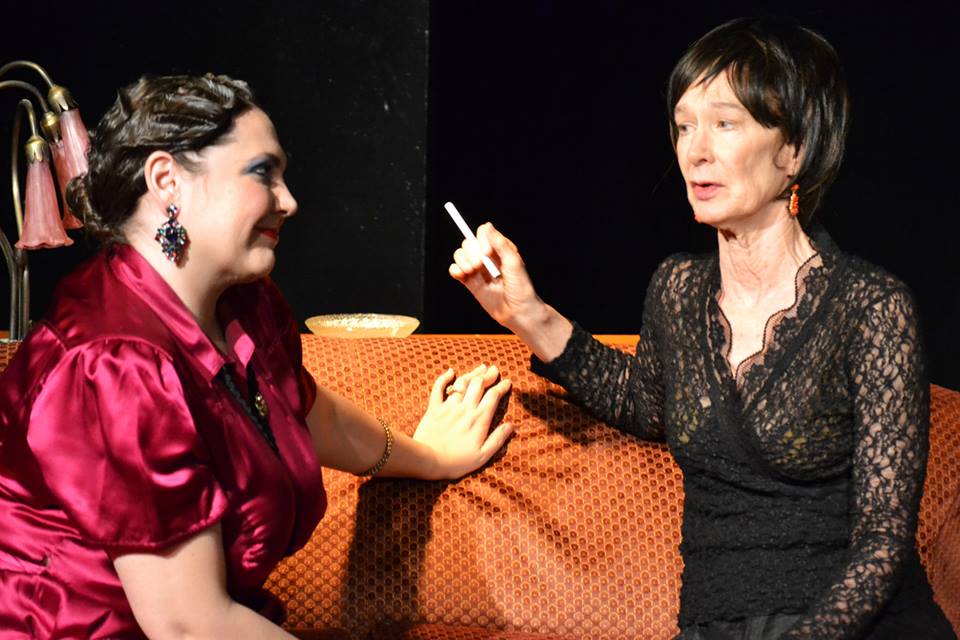 Alice B. Toklas’ devotion to Gertrude Stein, her femininity, her dependence and rooted strength are so charmingly expressed by Penny Lynn White I’d see the play the play over just to see her do it again.  She’s enchanting, and, with the playwright’s help, makes Toklas make sense.

Little Wars is a play of telling rather than showing, dependent on McCasland’s writing rather than plotting.  By the end, we’ve heard each woman’s story and some of these are stronger than others.  Dorothy Parker, played with touching irony by Dorothy Weems, enlivens her miseries with touches of the dry wit that rings throughout Parker’s writing: there are several good Parkeresque lines — I’d have liked even more.

Kim Rogers is so exciting as an actress and has such superb stage presence that, though what Agatha Christie had to say seemed less original than some, I loved every minute of her revelation of man troubles anyhow, watching how Rogers did it.

Bernadette’s story is grim, and told with suppressed fury by Morgan Detogne, though the account itself while of extreme, awful events, was too easily anticipated in its outlines.

Long after the war, Hellman’s writerly veracity was challenged on television by another writer, Mary McCarthy, with Hellman responding with a lawsuit. A key issue was Hellman’s claim that she had met Muriel Gardiner (Gardiner herself said she had not known Hellman) and further that Hellman had stolen Gardiner’s personal story of rescuing Jews and acting as an anti-Nazi spy in her own writing to her own advantage.

Although the matter seems at best moot, for some reason McCasland has come down in defense of Hellman, and the view that the two met is a raison d’etre for this play. Given his sympathy for Hellman, it’s surprising that his portrayal of her is thin, rescued in this production by Kimberly Faye Greenberg’s humorous impersonation of Hellman’s look, style and mannerisms.  The character isn’t given much content but Greenberg has her puffing away on the ever-present cigarette with convincing arrogance.  While the other guests open their purses generously to Muriel’s cause, Hellman is the holdout, saying “it wouldn’t matter,” a weak reason for a strong woman, and out of character, nor do we understand why she changes her mind and makes a generous contribution.

Little Wars fulfills a nostalgic fantasy — like Plato’s Symposium.  Well known bright lights from the past gather and we’re there, too — catching their jokes, clueing in on their interactions, and deepening our understanding of what makes them tick.  Fly-on-the-wall style, we’re among the great, brilliant, and witty.  Thanks to McCasland’s talented writing and ability to create a world, and to flawless casting, they come alive for us.  We’re there to learn from them, and love them.  There are future plans for developing Little Wars — I’m eagerly looking forward to more.

Thanks for writing — I sure agree, you really get the feeling the author “knew” Gertrude Stein, and had the words to say what he kneew.

Your relating this to Plato increases the enjoyment of what was a marvelous evening of theater. I too have trouble and understanding why the Hellman story appears to be whitewashed in view of the history. That being said, the first act was really tremendous, the second act was a little bit of a letdown – but this is still a work in progress. Even with these very slight reservations – this is one to see. The portrayal of Gertrude Stein both physically, emotionally, and in words was to me one of the many high points of this very excellent production.