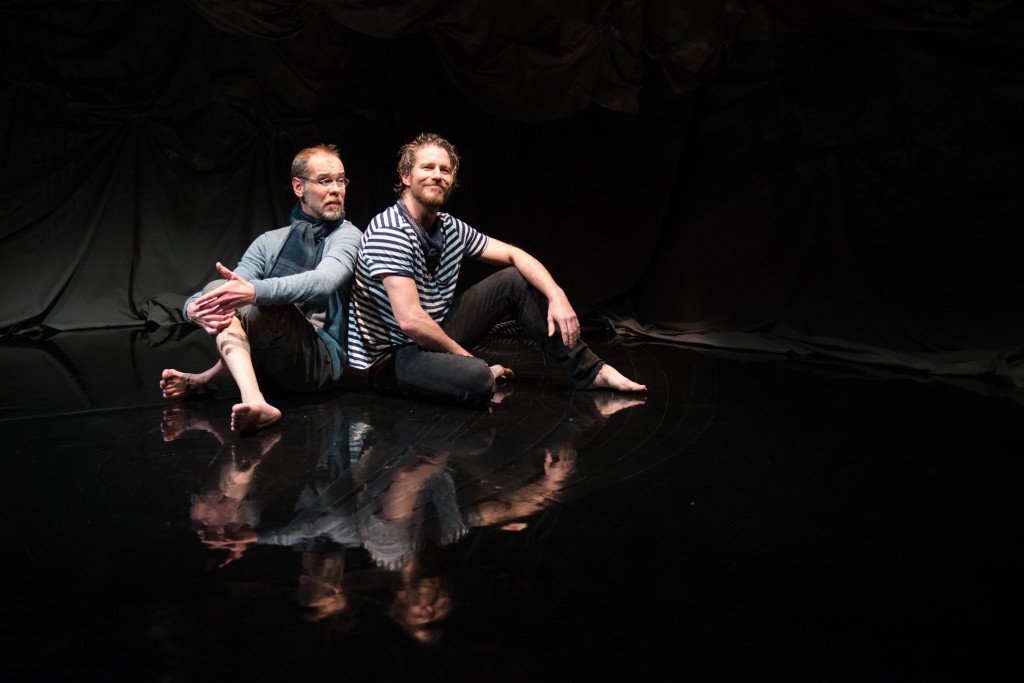 This intense, gripping short play is superbly acted and perfectly produced.  It’s about what happens to two men, The One (Tierney) and The Other (Butelli) as they un-moor a small boat and sail out past the lighthouse to the sea.

They are a study in contrasts, and of the power equations between lover and beloved.  The One, in his striped sailor’s shirt, is youthful, handsome, brawny, with athletic ease.  This is his boat, and he knows his way around the water.  The Other, in his soft cardigan, is older, bespectacled, bony, awkward: when he’s ordered to tie the boat to land, it’s clear he’s never tied a sailor’s knot, let alone jumped off or on a boat before.  But he does it, and makes it, though with some bruises.

And then there’s their difference in words.  The One, emerging from sex he didn’t want but “just did”, searches for words to express his psychic angst: he isn’t “here,” he can’t bear noise, he can’t, in fact, bear much of anything. The Other, down-to-earth, loving,  questions, trying to understand.  The Other is skinny, but he’s the one with the healthy appetite, whether for sex or food.

The backdrop is swathed in fabric that looks like silk, in shades of gray to white and the floor is shiny wet-black:  clouds, sky and sea.  (I saw a face staring down formed of the wrinkles of the fabric but I don’t know if that was intended, though I hope it was.)  Although we don’t at first know where we’re headed, a sense of foreboding builds with every word and action.  The One knows where he’s headed, though  —  beyond the rocks to the open sea.  And he carries us, along with The Other, with a siren’s skill and purpose.

A single  prop is multi-purpose — a thick, black, twisted rope.  It’s used to tie and untie the boat and — through mime and sense memory that’s close to magic — turns into a bottle pouring wine, meat to dig one’s teeth into, and a tiller steering against heavy waves.  Like The Other, the rope does what it has to do, even when it’s a stretch.

The play is written as a scenically and emotionally descriptive poem;  the dialog moves like two musical  instruments in a sonata.  The One, driven by angst to metaphor, initiates the themes, and The Other, trying to understand his affectless friend, responds, puzzling over the fluid imagery.  Beyond words — and a particularly compelling aspect of the play –the personalities and power dynamics between lover and beloved are conveyed through action — who ties up the boat?  who sacrifices his common sense?   who takes the tiller?   Who wins?

The ecstatic conclusion perhaps over glorifies romantic depression.  Still, deeply human and psychologically true, I Am The Wind is satisfying as a study of two specific human beings.  It also has the spare clarity of a parable and in its play of youth and age, boldness and apprehension, land and sea, floating and sinking, is open to broad interpretations, like shapes in the clouds.  Its hold-your-breath suspense carries you to an ending that is moving and cathartic.

This play – a visual poem – started out much too slowly and it was not the last portion of this that this viewer became engaged. Certainly from the beginning there was the sense of tragedy – who was going to die? The relationship between the two characters, to me, was very ambiguous from the beginning and the conclusion itself was also left with some possible ambiguity. It was an interesting piece but not to me exciting. The acting was superb, the use of the one prop – the rope – was intriguing and done quite effectively by these two… Read more »