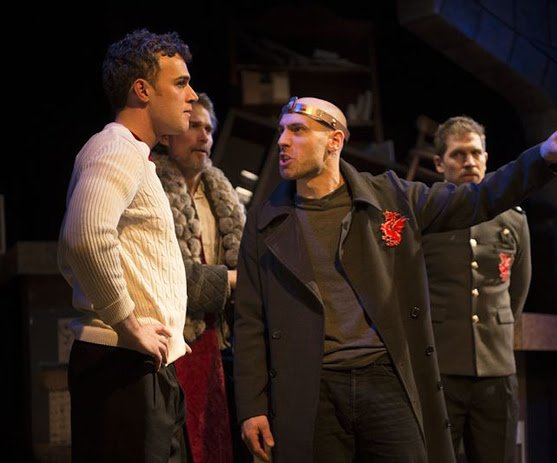 Taking as its starting point that “Nobody really likes Shakespeare,” this play, adapted from Arthur Phillips’ book, The Tragedy of Arthur, is annoyingly arrogant, along with its failed humor and confused and banal “plot.”  As a Shakespeare sendup this might have worked as a ten-minute skit, but not as a three-hour play.

Here’s the idea:  Shakespeare really wrote a play entitled The Tragedy of King Arthur, but it was lost to posterity.  Now, an often jailed forger of petty items such as store coupons has bequeathed to his son, who is in fact the prolific author Arthur Phillips — note that Arthur — the original folio … or is it a forgery?

Which is it? that is the question.  An incredibly valuable folio of a lost play by Shakespeare? or a fake?

In order to find out, the play is read through — semi-produced in a helter-skelter deconstructed way — by Arthur, his sister Dana, and various others.  But the answer is quite clear from Phillips’ first pseudo-Shakespearean line, heavy as lead.  Not for an instant could anyone think Shakespeare had anything to do with this play, yet the question remains “open” for three long acts.

Playwright George Bernard Shaw took on Shakespeare — but to prove his own mettle, he wrote plays like Shaw, not Shakespeare.

One gets the impression, though, that Arthur Phillips thinks he’s doing a pretty good job of writing Shakespeare (whom he doesn’t think much of anyhow, which may make it easier), since the overstressed pentameter (meant to be funny?) is filled with slack metaphors and the play throws in a bunch of Shakespearean tropes: sword play, soulful soliloquies, ducal rebellions against the anointed king, etc.  Meanwhile, the character of our modern day Arthur, Phillips, Hamlet-like, works out his relationship with his dead father who appears on stage from time to time, no surprise there.

Evidently Phillips finds repetition at the heart of Shakespeare because the play is very repetitive:  there’s not one spoof of Shakespearean sword play but three or four.  A messenger bears bad tidings and is promptly killed, a humorous (?) take on messengers in Shakespeare and on diplomatic immunity but if anybody found it funny the first time, they certainly didn’t laugh at the repeats.  Anyhow, after the intermission, there were fewer people left in the audience to laugh.

The set, a past-present deconstruction of an author’s study and castle parapet, is cute and — advertisement for myself style — features a prominent, illuminated blow-up of Phillips’ novel, The Egyptologist.  The actors, with one exception, are competent, including Jacques Roy as an energetic Arthur.  He made three (once is never enough here) very heavy, flat footed jumps from too high a perch that made me worry for his knees;  they didn’t illuminate the character or the action, though, but seem to have been done to wake up the audience.

Good News! Metropolitan Museum of Art in NYC will be open 7 days a week starting July 1, 2013

So glad to hear from you, Sir Francis… and so glad to get straightened out about who wrote all those great plays we thought were by Shakespeare! What a revelation!

Thanks so much for writing in!

If imitation is the sincerest from of flattery, I only wish that it was done better. But, as we witness this real Shakespeare play, truth will tell and the world will know that he, Shakespeare, was mediocre, banal , plagiarist of my great plays. In his Tragedy of King Arthur we find mere palimpsests of my Hamlet, Taming of the Shrew, all my history plays and much more although he seems to have omitted King Lear – probably too profound for him.