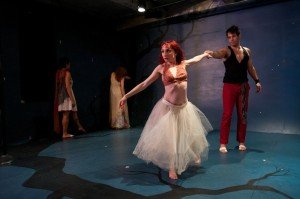 This is a vibrant, imaginative and creative play, formed in part from the myths of Echo and Narcissus and Orpheus and Eurydice.  It’s drenched in dance and music, and beautifully performed by an exceptionally talented ensemble.

It’s a play all about liminality and carries the vision of a gaze into the unconscious — a very bright and exuberant world.  Eurydice’s Dream spectacularly maintains a tension between consistency and narrative flow — narrative sense-making and the free form of inner life.  It’s tremendously impressive.

While truly an ensemble piece, the touchstone is the character of Eurydice, bitten by a viper on the day of her marriage to the musician Orpheus, and carried off to the underworld where Orpheus succeeds — with great difficulty as always! — in finding her, only to lose her to the lord of the Underworld by yielding to temptation — disobeying the injunction  not to look back as she follows him upward to the daylight.  One glance and she’s gone forever. 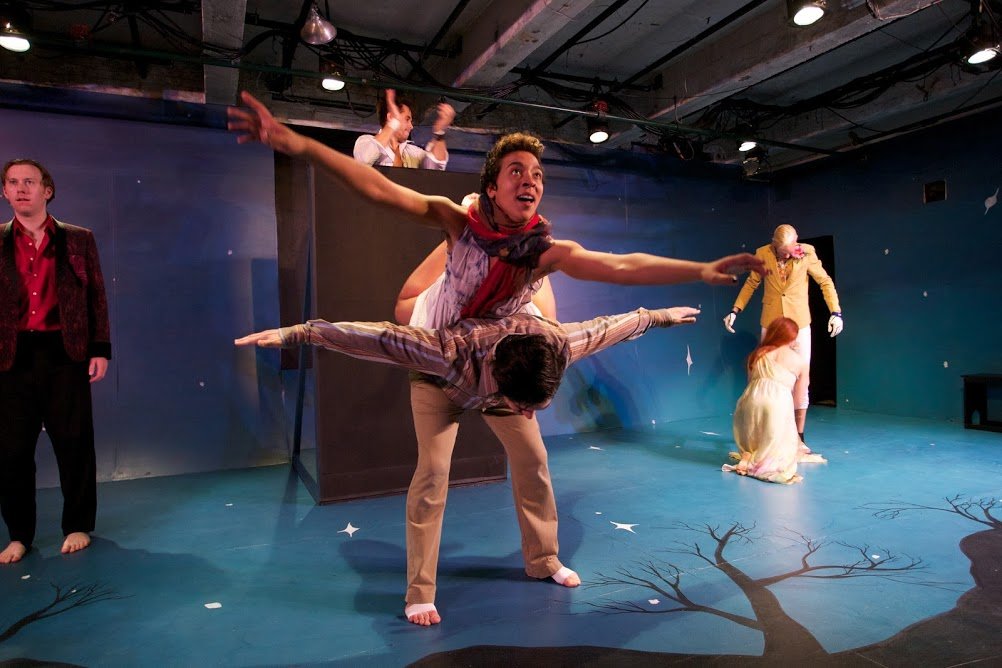 Woven in is the story of Narcissus, loved by the nymph Echo but too in love with his own beauty to respond to her fully, seeking instead –impossibly, fatally — to embrace his own lovely reflection in a stream.   Blended with the ancient myths are contemporary passionate embraces and equally elusive loves, fleeting glimpses of men loving men and women loving women, circling around the tantalizing and fragile affair of Amerika and a man native to the Central or South American country she’s visiting.

The stage is gorgeously painted cosmic blue interpenetrated with stars:  gravity loses its hold to the dark trees painted sideways on the floor.  The whole field of vision is active, like the screen of ones own inner life where episodes spin into central focus but the margins are dynamic and exciting.  There are no dead spaces in Eurydice’s Dream — wherever you look is alive, and worth considering.

Among the uniformly excellent performers, some are exceptionally individualized, and these provide a particularly arresting aspect for the whole production.  These intensely specific characters are one of the reasons that from beginning to end one never wants to stop looking — even blinking at Eurydice’s Dream seems a nuisance.  Central to all, Sonia Villani as Eurydice is a fine dancer, a focused, passionate actress, and a comedian with a tragic seriousness, particularly stunning in her episode as the rubber faced Sound Mimic in a circus side show.  She conveys a seamless combination of vulnerability and backbone that makes her Eurydice unforgettable.  I’d love to see her play Gelsomina, the young woman in La Strada (and would make a point of seeing her in any role she takes on.)

With terrific dancing, acting and singing, Marco De Ornella brings unabridged male power to the role of Orpheus, combined with an inventive freshness.  Jason Griffin’s remarkable ectomorphic beauty convinces and surprises as Narcissus.  His physical battle with an intractable surface representing the so-near and yet impossibly far image in the stream is powerfully rendered and beautifully choreographed.   Jessika D Williams brings a striking physical vitality to the role of Amerika and exceptionally focused, subtle facial expressions.

It’s to the choreographer’s credit that much happens at once in Eurydice’s Dream but one can take it all in — there are no conflicts about “where to look” as in a multi-ring circus, it’s all there for you as if it’s all a part of you.

I found the added story of the Glass Eye didn’t add anything, and here and there the text seemed to flatten out but, pretty much throughout, Eurydice’s Dream is tone perfect in its vision of impermanence and transition as fundamental features of love and life.  It’s filled with transformations and yet holds on to its story line.  Ovid, the famous teller of the classical myths in his Metamorphoses — transformations of form and being — would love it.

Eurydice’s Dream plays on Mondays, Fridays, Saturdays and most Sundays through April 22 at the Interart Theatre on West 52nd Street in Manhattan.  For more information and tickets check Blessed Unrest’s Facebook Page.

I, too, am always amazed by the persistence, the tenacity — the never-say-die character of the great myths!

Thanks for writing,
Yvonne

Your review really captures the spirit of this most intriguing and singular performance. It is always surprising to see how 3000-year-old myths still reflect the human condition. One must also add high praise to the performers and the wonderful way in which they portrayed so many meaningful scenes and such graceful and purposeful ways. It was a memorable evening, which will seldom be repeated.