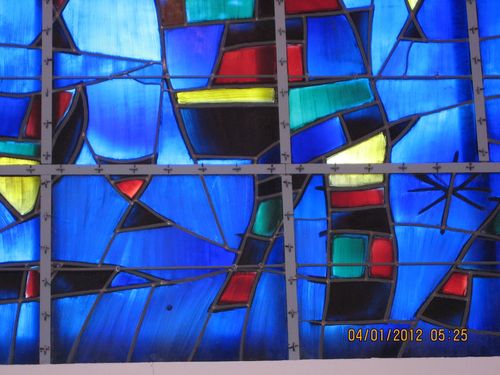 The wild flowers are yellow and purple and the hills are terraced with olives, and amidst it is what I will always think of as Miro-Land — the Fondation Maeght, founded by Marguerite and Aime Maeght in 1964 for modern art, which remains a uniquely private museum.  Unique also:  it’s open every day of the year “sans exception” — I love the spirit of that!  And the total dedication.

Great modern artists have outstanding works here, but the Spanish artist Joan Miro in particular is everywhere and it’s his inventive genius, his sense of surprise — his sheer joie de vivre that brings it all to life.   Not surprising, perhaps in that he was integral in the planning of the fondation, working with Marguerite and Aime Maeght, art dealers, art lovers, friends of art and artists and philanthropists, in the planning and development of the fondation which was inaugurated in 1964.

There’s some paradox in Miro’s art:  it’s often whimsical and his paintings characteristically include miniaturist units suggestive of the smallest things — microscopic views of one-celled life forms.  And yet none of the moderns is more fundamentally monumental.  A vast Miro tapestry, 20 x 35 feet, hung in the lobby of Number 2 World Trade Center:  its destruction was the greatest artistic loss that occurred in connection with the destruction of the towers.  (That’s my personal view, but I was interested recently to learn that it was also the most expensive loss.) 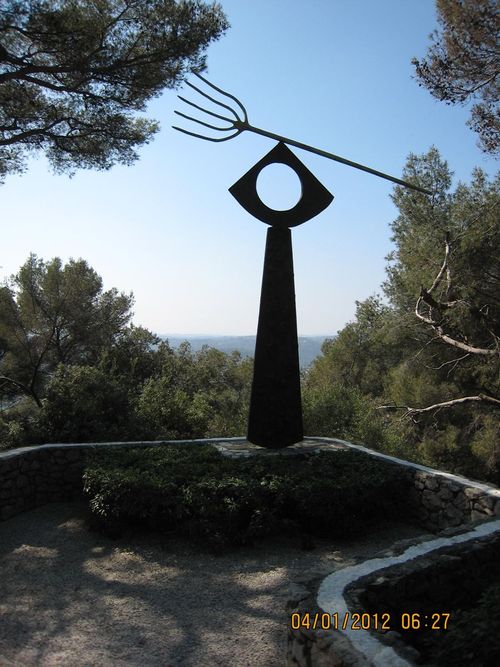 tapestry makes the point that though many think of him mainly as a painter, Miro worked in many media, small and large, sculpture in bronze, wood, and many kinds of stone, ceramics and stained glass, as well as tapestry. The first gallery I spent time in at the Fondation Maeght is the one dedicated to, taken over by and suffused with the colors of Miro’s large blue stained glass double window (illustration at very top).  Matisse’s Chapel in nearby Vence the day before disappointed (more on this to come): Miro’s double window in intense blues and jewel colors reaffirmed the joie de l’art. 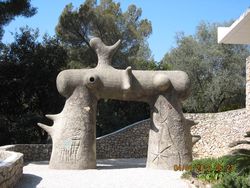 Outside is Miro’s Labyrinth, a garden where – beyond looking – one explores on foot and so becomes joined with Miro’s world of surreal transformations.  Free form wandering takes one through the polymorphic Gaudi-esque L’arc (left), made in concrete, and among enigmatic sculptures that seem to pulsate with life with a primal form and intensity, a fanciful ceramic wall spout filling a lusciously refreshing blue mosaic pool that sparkles with visitors’ tossed coins.  And 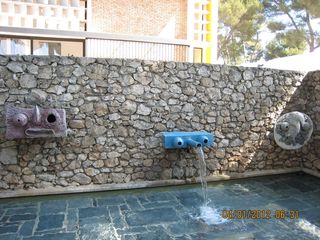 — beyond any whimsy — Miro’s La Fourche is a tall punctuation and another kind of thought: homage to the Spanish peasants, Miro’s countrymen, who raised their pitchforks as weapons against Franco during the Spanish Civil War.   In terms of immediate impact, it holds its own with Picasso’s Guernica, and indeed, Miro holds his own among the greatest modern artists ( and surpasses Matisse — at least in Provence!).  I came away feeling more than ever the strength and magnitude of his work.  How did I ever miss the Fondation Miro dedicated to his art in Barcelona?  I guess my head was too turned by Gaudi there.  Have to go back!

There’s much more to see here than Miro.  A stabile by Alexander Calder greets you.  A mosaic, Les Amoureux, by Marc Chagall and La Vie, 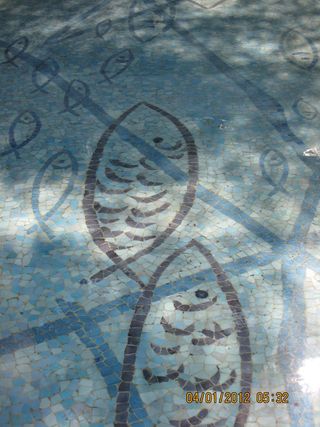 the largest easel painting Chagall ever made, although he made even larger murals, such as the two that define the façade of Lincoln Center for the Arts in New York City.  There’s a powerful Leger as large as the Chagall and outdoors Leger’s wall mosaic.  An entire court is given over to a battalion of figures by Giacometti.  A pool with fish is by Georges Braque (there’s a surprise).  The building (which I liked best for its interior spaces and the courts and gardens) is designed by the Spanish architect Lluis Sert, a Catalan like Miro. The Fondation Maeght has to be on the this I must see list for any lover of modern art. 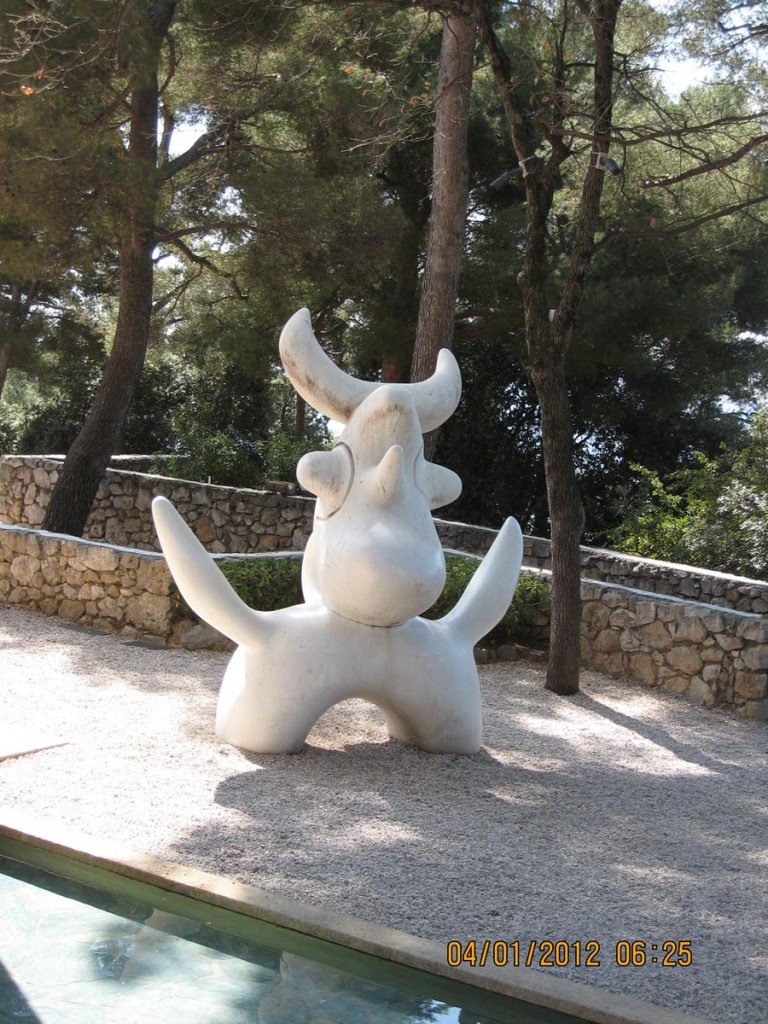 Hope you get the chance to return!

Thank you for adding so much more information concerning the exhibition at this, I must call it, a magical place. Your graphics are really very good. Hoping to hear more of your museum visits.

Thanks to you for writing in —

When I was in that area many, many years ago much of what you saw was not even there—so now more than ever I feel I would love to retrace my steps.
Thanks again for your letters.