La Strada shines like a gem.  The writing, acting, music, movement, mis en scene are perfect.  Based on Fellini’s great film of 1954, and now set in Spain, it tells the story of Gelsomina, one of the world’s extra persons, a slightly feeble-minded, dreamy young woman “with a cauliflower head”  who, in a poor family of too many women, is sold by her mother to Zampano, an itinerant “strong man” entertainer and together they set off on a bleak, Goyaesque road.

He bursts chains with his muscle and lung power;  she in her sad but appealing striped, droopy costume, passes the hat.  A few coins trickle 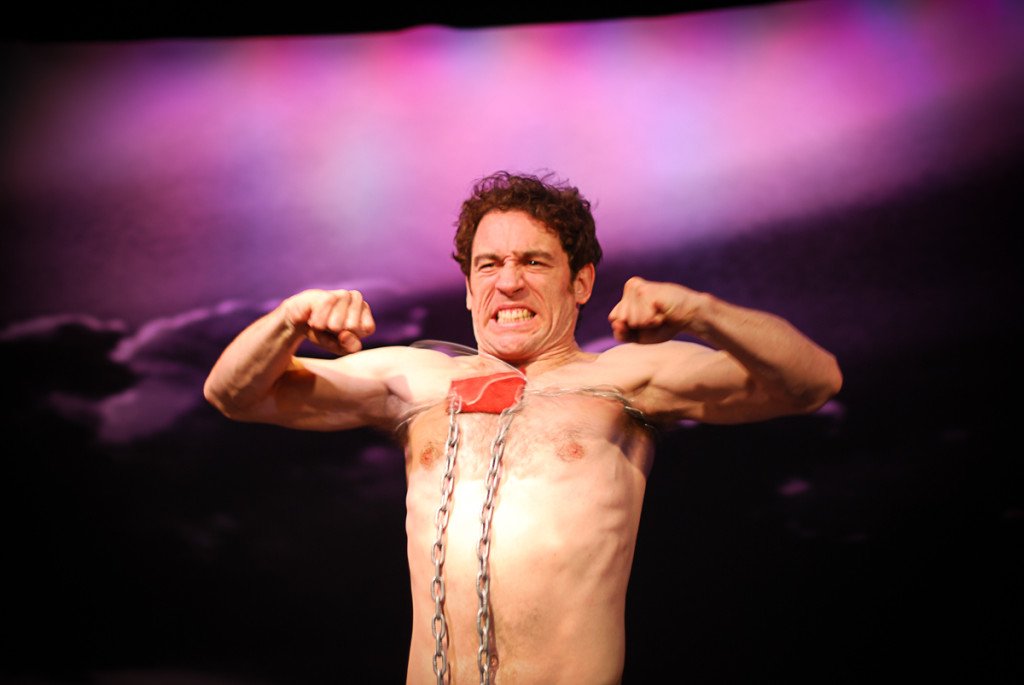 in.  They work comic bits in which she’s the butt of the joke.  The strong man is brutal in this way and others, and when things take that turn, he’s unfaithful to her.  She’s deeply attached to him in ways we don’t thoroughly understand.

Joining up with a circus, they meet an absolutely wondrous clown, light footed and charming in his movements, profound in his understanding.  Attracted to Gelsomina, he’s gentle, respectful, and filled with insight — everything Zampano is not.  The clown — with tender patience — teaches Gelsomina a beautiful song.  Two dwellers on the edges of society finding an end to loneliness, a purpose in each other — there’s the possibility of an idyllic ending, of heaven on earth.

But — oh, eternal triangle — what about Zampano?

The clown and the somewhat dimwitted girl, two poor and easily overlooked human beings, make as great a sacrifice on the altar of honor and love as exists in literature or life.  He gives her a remarkable and most self-sacrificing gift: he tells her that she alone, and nobody else, would stay with Zampano (Who is really the strong man?).  His gift is to let her understand she is needed.  The waif for whom life seemed meaningless, now has a purpose.  Existence is unified and so everything matters, even a tiny pebble.  Even Gelsomina.  Even Zampano. She and the clown reach — poetically and not fully verbalized — a noble and tragic understanding that she will stay with Zampano.  In time, as the tragedy works unsparingly through these three lives, the melody the clown taught Gelsomina hangs on the wind of someone else’s memory.

It’s a play with a narrow focus and a vast, truly universal, meaning.  It looks at three figures who are unimportant by societal reckoning, on the margins, and finds in their “small lives” the full range of human experience from from selfishness to self-sacrifice and from brutality to love.

This powerful and moving play is performed in Spanish with English super titles so available on the monitor you hardly notice you’re reading them.  Nanda Abella is touching and passionate as the soft, uncertain girl who discovers a tough center within herself.  Luis Carlos de La Lombana conveys the circus strong man’s all-out brutality with only a hint of vulnerability.  Israel Ruiz brings an unforgettable sense of depth to the role of the clown — one feels the clown knows all there is to know, conveyed with a dancer’s flexibility and irony of a great actor.

The set with swooping rhythms in the brownish tones of a landscape by Goya, makes the small stage seem big as the world and the road continuing, in harmony with the largeness of these “small” characters.

The music, songs by Luis Carlos de La Lombana and Caridad Martos, arranged by Jorge Merced, is poignant, enveloping, and beautifully played by Stephanie David on the violin and Jennifer Harder on the trumpet.

Review | Clowns Full-Tilt: A Musing on Aesthetics | Created and Directed by Kendall Cornell | In Collaboration with the Ensemble, Clowns Ex Machina | La MaMa

I think you’ve got it right about the fancifulness and sadness, and I think that’s a really interesting way to put it. If you’re not in NY, you might check out the movie version of La Strada, it goes back a long way but I saw it recently and I think it holds up beautifully. But great as Fellini was as a director/creator/film person, I really loved this play.

Wow. This sounds like the kind of sadness that I can relate to, oddly enough. I tend to not care for plays with biting social commentary unless it’s funny, so I can laugh at it. This is fanciful enough that I can enjoy it for itself. It didn’t surprise me at all how truly sincere this play turned out to be. Granted I read reviews by actual Mormons saying so, but I’d been watching South Park for years. I was in New York over the summer and was able to get Book of Mormon tickets at http://amazonticketsonline.com/The-Book-Of-Mormon and was not… Read more »