note:  to help you decide,  Ken Davenport, a producer of Broadway and Off-Broadway shows, sorts out his 10 to see in in his blog, date August 11. The official site of FringeNY with information and tickets is useful as is  Theatermania’s outline guide.

The New York International Fringe Festival (FringeNYC), the largest
multi-arts festival in North America, will present the 15th Annual Festival from August 12 – 28, 2011. This year, the festival will present programming by 192 of the world’s best emerging theatre troupes and dance companies in 20 venues in Lower

Thus far, advance sales are on par with last year. “At only $15 per
ticket, FringeNYC is one of Manhattan’s few remaining bargains,” notes
festival Producing Artistic Director Elena K. Holy.

Yesterday afternoon, Yeast Nation (a new musical by the Tony Award-winning team behind the FringeNYC-to-Broadway hit Urinetown) became the first show to sell out a performance. This is the earliest  a show has sold out in the 15-year history of the festival. In 2005, Silence! The Musical (which was co-produced by much of the same team behind Yeast Nation) became the first show in FringeNYC history to sell out before the opening day of the festival.

Today, Bella and the Pool Boy sold out its opening performance and several other productions are on track to sell out individual performances including: The Legend of Julie Taymor, Facebook Me, Pearl’s Gone Blue, Smoking Section, Jersey Shoresical, and The Bardy Bunch: The War of the Families Partridge and Brady. Other top sellers thus far are: Parker & Dizzy’s Fabulous Journey to the End of the Rainbow, Whale Song, Sammy Gets Mugged, You’ve Ruined A Perfectly Good Mystery, Destinations, Pawn, and Hush The Musical.

In 1997, New York City became the seventh US city to host a fringe festival, joining Seattle, Chicago, Minneapolis/St. Paul, Houston, Orlando and San Francisco. In its first 13 years FringeNYC has presented over 2100 performing groups from the U.K., Canada, Poland, Japan, China, Germany, the Czech Republic and across the U.S., prompting Switzerland’s national daily, The New Zurich Zeitung, to declare FringeNYC as “the premiere meeting ground for alternative artists.” The festival has also been the launching pad for numerous Off-Broadway and Broadway transfers, long-running downtown hits, and regional theater productions including Urinetown, Never Swim Alone, Debbie Does Dallas, Dog Sees God, 21 Dog Years, Krapp 39, Dixie’s Tupperware Party, Silence! The Musical, Matt & Ben, The Irish Curse, 666 and the current Off-Broadway productions of Tales From The Tunnel and Abraham Lincoln’s Big Gay Dance Party and as well as movies (WTC View) and even a TV show (‘da Kink in My Hair). FringeNYC is a production of The Present Company, under the leadership of Producing Artistic Director Elena K. Holy. 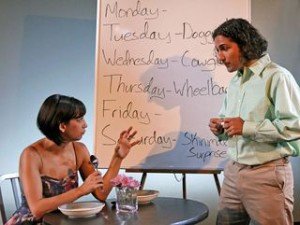 Thank you for this information – hope I can see some of these – you’ve been a real service.