Art Review | Rooms with a View: The Open Window in the 19th Century | Metropolitan Museum of Art

The exhibition includes 57 works of art by 40 artists, small oil paintings and works on paper.  Works are divided into three groups:  quiet rooms with figures, artists’ studios, and paintings without figures in which windows are the major motif.  The title is grander than the exhibit (at the risk of seeming “picky” — the windows aren’t always open, nor are there always views).

But what’s missing from this exhibition is a real view — that is a point of view — an insight that could emerge if the works had been brought together through a strong organizing vision.  The exhibition gives us the chance to see first hand a number of works not otherwise readily available but it’s a one by one kind of exhibit, lacking synthesis, and the leap into enlarged understanding. 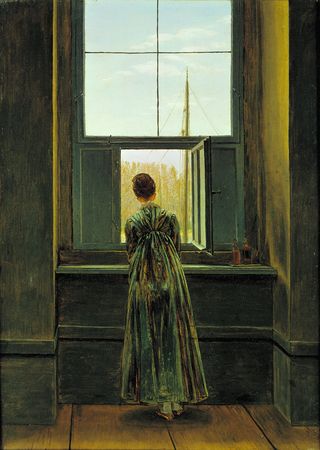 Still, as one moves through, among works of spotty quality, some paintings spring to life.  One in particular stands out, not surprisingly by the great German romantic painter Caspar David Friedrich, Woman at the Window (1822). It’s a study in contrasts that seem casual and “everyday,” yet they represent profound human issues:  inside and outside, near and far, dark and light (a Christian light, note the cross formed by the mullions of the window, backlit by daylight and the big sky), below and above, trees rooted in the earth and clouds floating freely, concrete and abstract, contingent and absolute, left (evil, dark, closed shutter ) and right (good, light) … I’d bet, looking at this intricately planned painting you can discover other ways in which it expresses the contrasts of humanity’s great ultimates.  A ship’s mast, avatar of human longing, stretches upward.

The woman is Friedrich’s wife — and this is apparently the only painting he made of her so, although it is quite small, one might think, it was particularly important to him.  Standing, she herself is part of a cross, the horizontal bar the window sill.  Eyelids are like shutters;  spirit is everywhere if you open your eyes to the light. Light — spiritual as in a church — touches the woman, and is carried inward by the keen strip on the shutter’s edge. 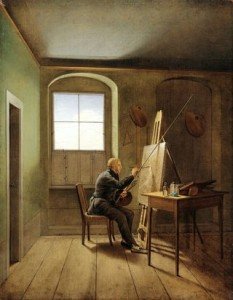 Here, by George Friedrich Kersting, is Friedrich at work, this time on one of his characteristic large landscapes.  The studio is immaculate, austere as a  monk’s cell as his contemporaries said; there’s none of the lived-in feeling and paraphernalia usual in an artist’s studio of the time, no curtains, plants on the windowsill, as in 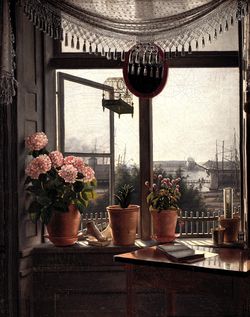 this painting by Martinus Rorbye, nor any clothing or other personal items, plaster casts, nor paintings by other artists such as one expects in artists’ studios of the time.  All of the other artists’ rooms in this exhibit have are softened by creature comforts and memorabilia, but Friedrich wanted nothing to distract his mental focus.

Here are Friedrich’s two dryly painted and precise sepia views from his studio looking onto the Elbe River at Dresden.

The painter must have enjoyed inflecting the windows’ arched forms and play of perpendiculars through the oblique and direct views. The exhibition reminds us that this pair were an inspiration for many artists to paint scenes of open windows.

But there are legions of paintings, before (and during and after) by Friedrich, where the window figures importantly for its light and often for its symbolic meanings, such as, in this very Metropolitan Museum of Art, Vermeer’s The Milkmaid :  for close-ups of this painting, including the broken window pane, click on this link — enough to take your breath away. Like Friedrich in Woman at the Window, Ghirlandaio, in the Italian Renaissance, expressed religious and existential issues through everyday-looking figures:  in An Old Man and his Grandson, the contrasts of youth and age are expanded through the window view of the path that winds from things growing to barren stone and, in the far distance, transcendent light (that’s cracking paint on the old man’s forehead).  Rembrandt sets himself near the window, like some painters of this exhibit.  The 17th-century Dutch painting tradition of Vermeer and Rembrandt was particularly influential on the Northern European painters of this exhibition (though this is barely mentioned in the exhibit wall information).

There  are some small treasures.  Kersting, in Man at his Desk, plays with 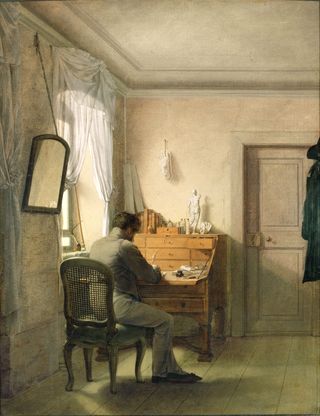 different ways of thinking about beyond the actual room:  through a mirror, a closed and heavily curtained window, an open window, and a door — the door is closed for the moment but the coat and hat are ready.  The man is probably an artist since the room contains plaster casts, not only of a classical nude, which one might find elsewhere but, on the wall above the desk, what appear to be casts of feet, which are something only an artist can want and love.

Evidently his family’s reunion that Wilhelm Bendz paints in Interior from Amaliegade with the Artist’s Brothers wasn’t a very happy one.  (Maybe that’s why this is the last time they got together.)  There’s so much suppressed antagonism that the artist has to resort to an unusually wide format just to keep the two brothers in the same room!  They’re ignoring one another,

at least on the surface, and the man in shirtsleeves has his back turned to his brother.  And he’s tense — look at that right angled elbow and fist.  Even the disjoins in the floorboards set them in separate spaces.  Can we tell what’s wrong?

The artist has given some clues by including in the painting two specific and well known visual symbols:  the foot without its shoe, and the skull.  The seated brother wears only one shoe, the other kicked aside (clear when viewing the painting but harder to make this out in the photographic reproduction.)  In the history of art, a shoe off has a very specific symbolism:  it’s a marker for sexual activity;  see, for example, Fragonard’s The Swing where the girl kicks off her show as her lover gets a good look up her dress.  Evidently the seated brother’s a rake.

What Bendz conveys about the brother in shirt sleeves is more ambiguous.  His back is turned to his seated brother, and he’s head to head with a skull, the symbol of Vanitas, a reminder of the triviality of pleasure in the face of the certainty of death.  Is he expressing disapproval of his seated brother?  Or has he been involved in some trivial pursuits, too?  Perhaps so, since the gazes of the stern parental portraits are directed toward him.  And what frustration or change of heart is signaled by note discarded on the floor?

Whatever precisely these brothers have been up to, the prominence of the nude male sculpture in the foreground is a visual — and moral –counterweight to the stern portraits of the parents, the married pair, highlighting the sexually libertine undercurrent in this superficially controlled, conventional family setting.

“Rooms with a View” covers only the first half of the 19th Century, and artists from only four countries, Germany, Denmark, France and Russia.  That seems pretty idiosyncratic.  It doesn’t even take in, say, all of Europe.  What about England?  Japan?  The U.S.?  etc. etc.  The exhibition is limited to small paintings.  What about big ones, like Marie-Denise Villers life size painting of Young Woman Drawing (1801) just down the hall in the Metropolitan from the exhibition?  Now that’s a room with a view — and room size!

It’s also disturbing that the paintings are hung in such a way that for many their frames cast heavy shadows across the top edges (which may be why the photograph of Friedrich’s Woman at the Window, above, is cut off at the top — the mullion-cross is really taller).  In general, the artists in “Rooms with a View” are significant in the story of art in their particular countries, but one would have welcomed some of the more significant painters and painters of time, and of the later 19th Century — and a view!

“Rooms with a View” is at the Metropolitan Museum of Art from April 5th through July 4, 2011.

The points you make are valid and really I just misinterpreted your comment. I agree that many of the paintings lacked the meaning behind the window and were just used as a ‘source of light’. I agree that Friedrich’s work embodied the exhibition and title and I would consider his work some of the best there. I did find some of the explanations by the paintings clumsy, for example there was one painting where a tortoise and snake were described as ‘frolicking’, I never though they were the sort of animals to frolick! I enjoyed much of your analysis.

I disagree with your comment of ‘what’s missing from the exhibition is a real view’. I agree that that not all the paintings have a view but I don’t feel this was the main point of the exhibition. I think the exhibition was about the interpretation of the window as a motif and the mood this established in the paintings. Furthermore, the artists of the Romantic Movement sought to use the window as an expression of yearning and not to simply paint the beauty of the landscape.

So what do you think is the standing brother’s problem???

Your analysis and commentary terrific – you should have curated the exhibition!