Romance is one of the funniest plays I’ve ever seen.  It’s wicked, nasty, but totally non-stop hilarious … what dialogue, what observation … I’m still grinning in the aftermath of it.

It’s a play focused on a courtroom trial — like The Caine Mutiny, Court Martial or Inherit the Wind — but never was there such a madcap courtroom as this!

The plot (which doesn’t matter much) involves a defense attorney’s attempt to get his (guilty) client off the hook by working out a solution for World Peace based on the client’s skills as a chiropractor.  (Don’t ask.  Go see.)

In the course of it, Mamet’s characters utter just about every politically incorrect hostile stereotype they hold in their hot little hearts.  Mamet hammers away at the nutsy disconnect between the conventional way people act “according to the rules” in their jobs and private lives — as attorneys, doctors, judges, bailiffs, husbands, lovers straight and gay, churchgoers of all stripes and citizens — and the Nietzschean craziness within — e.g., what’s a little child molestation on the side?  But this is one skillful playwright:  a “nice” person can happily laugh and laugh at Mamet’s incredibly open and nasty attacks on, say, Judges or Jews because Mamet isn’t prejudiced — he attacks everyone.

It seems a wonder he gets away with it — never mind that he actually has you laughing.  But I guess a big part of it is that his ultimate target is hypocrisy.  Revealing hypocrisy is always liberating — and one leaves the theater feeling liberated.  That’s a theatrical magic of its own.

And the lines are great!  And the performances are superb, in particular Reg Roers as The Defense Attorney, Darrel Hammond as The Bailiff, and Matt McGrath as Bernard — all the actors are excellent but above all the play hinges on The Judge and in that role Richard Kind creates a perfect comedic performance, one of the greatest I’ve ever seen.  I was really sorry when the play was over because — don’t let it end — I just wanted to watch more of him.  If this play were on Broadway, he’d be a shoo-in for a Tony.

And is World Peace obtained through The Defendant’s brilliant manipulation?  It’s not right to reveal the end of the play so — check the newspapers. 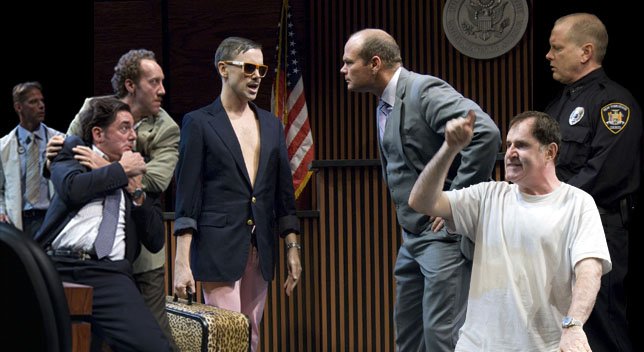 How I wish I could have seen theis! There’s so little to laugh about these days. As always, your reviews are vivid and almost like seeing the play Thank you!

Could not agree with you more – this was theater of the absurd at its best aimed at the human condition – the acting was equally as excellent.