Down Range brings us into the world of career soldiers and their families, the tensions that shape their lives, and the effects of deployment in Iraq. Frank and Doc and their wives Beth and Eva are a close foursome.  Once they were young and playful, picnicking near a lake but more recently life has come to weigh heavier. The play moves back and forth through time and we see it all as the men pursue their careers, early romance gives way to infidelity, and the women live as adjuncts, hangers on, one finding sufficient satisfaction in her family life, the other childless and bitter.  That’s how it’s been until now.  But the convoy the two buddies were traveling in while serving together in Iraq is hit by an IED and Doc, it seems, is killed.  We witness the military protocol with which Doc’s body is escorted home, while Frank returns alive.

Down Range is its exploration of various kinds of love at different stages of life, between lovers and between friends, between rivals, and between the living and the dead.  It imbues this often stark view of military living with great humanity, and makes all the more vivid the world it reveals to those not in the military, and the range of sacrifices our soldiers and their families are called upon to make.  Here at last, in a rather slow-starting off-Broadway season, is a well written, beautifully acted play about something that matters to us all. 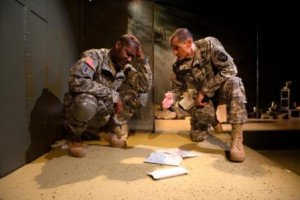 An interesting and well acted war play which examines the effect of their military service on their relationship to the wives. This is a seldom explored area and is treated effectively – all the wounded are not just the soldiers.

Thanks, I think so too!

oh I can see why … and you know, I thought about that wordalive
when I wrote it,but didnt want to reveal too much (I didlet myself
to say seemed once). Anyhow, Ive really had that play in my mind since
I saw it … good play!

I guess I was misinterpreting the phrase “…while Frank returns alive.” Apologies…

I don’t know how you decided that misintepreted the end of the play since I didn’t say a word about it. But I’m sure you have something in mind — how do you think I misunderstood the end? I’d really like very much to know. I think I “got” it, if the “switch” is what you’re referring to, but didn’t want to reveal it.

You completely misunderstood the end of the play…